Uchitel was one of a dozen women who surfaced as Woods’ mistresses in the 2009 sex scandal, causing wife and Swedish beauty Elin Nordegren to walk out with their two kids.

Uchitel, who was well known in the New York-Hamptons party circuit, vowed never to date a married man, again. But she’s back at it.

She was spotted passionately kissing married lawyer Ed Batts, 47, who dumped his wife and her three children five days before Christmas to be with the former nightclub hostess, according to London’s Daily Mail. 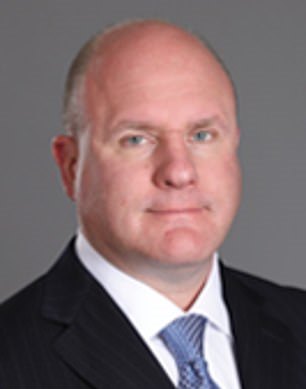 He and Uchitel were spotted canoodling at the Denver airport on Dec. 13, after an illicit weekend at a luxury hotel in Jackson Hole, Wyoming.

He picked up the $1,200 tab, including a hairbrush and Tampax, which suggests they had period sex, the newspaper reported.

Uchitel is apparently wild in bed. She allgedly had Ambien-fueled sex with Woods.

Batts appeared to be equally smitten. After meeting on an online dating site, he left his wife of six years and her kids from a previous marriage in San Diego, according to The Mail.

He was spotted a week later in West Palm Beach, Fla. with Uchitel, 45, and her eight-year-old daughter Wyatt.

Oddly, they aren’t shacking up. He lives in a rented three-bedroom townhouse across the street from Uchitel’s apartment complex, but they have been photographed repeatedly together, The Daily Mail reported.

When she confronted him about them late on Thanksgiving night, he tried to flee his Florida home and wrecked his SUV at their sprawling Florida mansion. She was allegedly chasing him with a golf club.

By the time it was over, some 18 months later, more than a dozen women had come forward, including Woods’ 21-year-old neighbor. All claimed they had sex with the golf star during his marriage.

During the scandal, lurid reports emerged about Uchitel’s secret relationship. She allegedly bragged that they had wild Ambien-fueled sex, according to reports at the time.

That set off a chain of events that caused more than a dozen women to come forward and admit they had sex with Woods during his marriage.

Woods and his wife eventually ended up in divorce, and he started openly dating Olympic Skier Lindsay Vonn in 2012. She helped clean up his image as a serial cheater and get his life back on track.

When they broke up, Uchitel insisted she was No. 1 in is heart and even entertained dating him again. They never got back together.

He is not known to have been in contact with Uchitel since the scandal.

Before the Woods’ scandal, Uchitel was also outed for having an affair with actor David Boreanaz while his wife was pregnant.

Rachel’s reputation before her marriage was, how to say it… sketchy.

Although she sometimes worked as a club promoter and manager, she was best known as a New York Party girl. And a man-eater.

She allegedly prowled the swank clubs in Manhattan and the tony Hamptons looking to hook up with celebrities.

Woods reportedly gave her a seven-figure payoff to keep quiet, and Uchitel tried to turn her 15-minutes of fame into reality television career.

But she was rejected by “Dancing With the Stars” and “Celebrity Apprentice,” although she did land a gig on “Celebrity Rehab” for a “love addiction.”

It seemed like her life would have a storybook ending.

She moved on and was married in 2011 to insurance underwriter and former Penn State fullback Matt Hahn, 10 years her junior, in a quickie Las Vegas wedding.

They had a child before rancorously divorcing in 2013.

Uchitel moved to West Palm Beach, near her mother and not far from Woods’ home, and lived under the radar until she surfaced with Batts.

His wife, Robyn Batts, 59, told The Daily Mail her husband’s affair began in November after they met online.

He went about secretly making plans to leave, down to shipping his Porsche Cayenne SUV to Florida, claiming he was having it repaired.

She said she only realized he was walking out when he boarded a red-eye flight to Florida on Dec. 19.

“It’s such a huge betrayal,” she told the British tabloid in an interview.

Uchitel is still trying to profit off her liaison with Woods.

She will appear in upcoming HBO documentary “Tiger,” which airs Jan. 10 and Jan. 17,

She discusses her affair with the golfer.   ‘Here he was, in my bed, and he was my Tiger,’ she says in the trailer.

‘After all this stuff that has out about the scandal, I felt that at some point, I needed to remove the shackles of what it’s like not to have a voice […] I don’t think people really get that,” she added.

Although Batts and Uchitel denied having an affair, Daily Mail photographers caught Batts walking her dog and spending time with her daughter.

The pair have also been photographed repeatedly dipping in and out of each other’s homes, the tabloid claimed.

‘He canceled the bank account and left town. I don’t know what we’re going to do. I feel so sideswiped,” the jilted wife told the newspaper.

Robyn was newly widowed when she met Batts in 2012. Then living in Colorado, she had three small children and was swept off her feet by the now 47-year-old, she said.

Less than a year later, Batts asked her to move in with him in San Diego.

The couple later bought a five-bedroom $5.5 million Spanish-style house where they have lived since their 2014 wedding.

According to Robyn, he was also willing to be a father to her children, now aged 20, 15 and 14. They barely knew their biological dad due to his untimely death from cancer.

She says she had no idea that anything was wrong with her marriage until she noticed Batts becoming cold and aloof around Thanksgiving.

“I noticed he was treating us badly. Angry. Didn’t have any time for us. At Thanksgiving, I noticed he couldn’t wait to get up from the table.”

In a 2010 interview, Uchitel claimed she was no whore.

“I have always been looking for the perfect man. I wanted a man who would marry me, give me the house and children I long for.

“I plunged headfirst into relationships which I should never have been in,” she says.