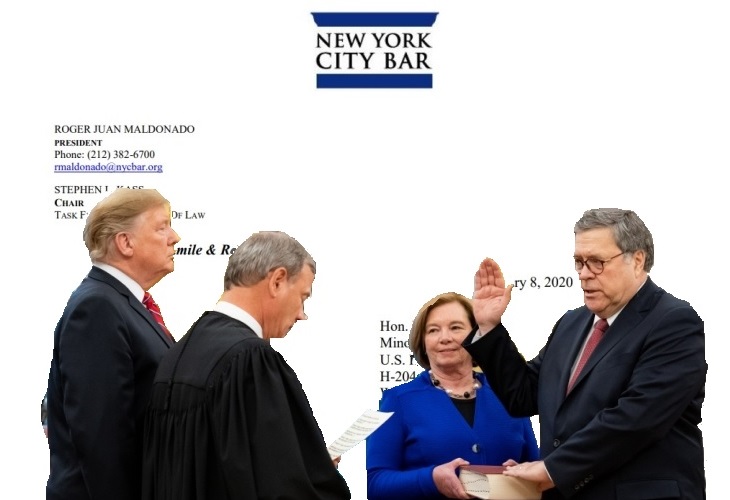 Attorney General William Barr has been accused of violating his oath of office. (Photo Collage: NYI)

Attorney General William Barr has engaged in a number of actions that call into his question his ability to maintain “public confidence in the fair and impartial administration of justice,” according to a scathing letter written by The New York City Bar Association.

Bar President Roger Juan Maldonado called on Congress to investigate Barr’s conduct for contravening “the norms applicable to his office.”

The attorney general is a Constitutional office that’s supposed to represent the United States, not the President. “The Attorney General occupies a unique position with special obligations as the nation’s top law enforcement officer,” the letter stated.

But Barr’s tenure has been marked by controversies revolving around a series of incidents that raised questions about his impartially.

“Mr. Barr’s recent actions and statements position the Attorney General and, by extension, the United States Department of Justice (DOJ) as political partisans willing to use the levers of government to empower certain groups over others,” the letter continues

The letter cites four specific instances and goes into detail, including footnotes, documenting Barr’s transgressions. They include the following.

“These comments follow and are reminiscent of Mr. Barr’s earlier mischaracterizations of the Mueller Report, prior to his release of a redacted version of it,” the letter asserts.

Mr. Barr claimed the special counsel had found insufficient evidence of any obstruction of justice by President Trump—a material mischaracterization of the Mueller Report and a proposition rejected by more than 1,000 former federal prosecutors based on the facts set forth in the Mueller Report.”

In fact, the Mueller report found that the Russian government “interfered in the 2016 presidential election in sweeping and systematic fashion” and “violated U.S. criminal law.” More than 20 Russian nationals were indicted.

The report did not find sufficient evidence that the campaign “coordinated or conspired with the Russian government in its election-interference activities,” but concluded the Trump campaign welcomed the interference and “expected to benefit from such efforts.”

It also identifies links between Trump campaign officials and individuals with ties to the Russian government. The investigation was hampered because several persons connected to the campaign made false statements and obstructed investigations.

Mueller later stated that his investigation’s conclusion on Russian interference “deserves the attention of every American.”

Volume II of the report was even more damning. It describes ten episodes where Trump could have obstructed justice while president and one before he was elected.

Before the heavily redacted report was released, Mueller got into a public spat with Barr over its conclusions.

The attorney general claimed in a letter to Congress that the evidence was “not sufficient to establish” that Trump had obstructed justice.

Two days later, Mueller wrote a letter to Barr, complaining that his interpretation “did not fully capture the context, nature, and substance of this office’s work and conclusions.”

“Mr. Barr’s conduct appears to run afoul of the “very special obligations” that he himself professed to recognize during his 1991 and 2019 Senate confirmation hearings,” the Bar letter states.

The city bar association also took Barr to task last October when it urged him to recuse himself from a Justice Department review of the Trump administration’s dealings with Ukraine,” according to The Hill.

Trump’s actions have led to two articles of impeachment against him. He will be only the third president in history to be tried in the U.S. Senate.