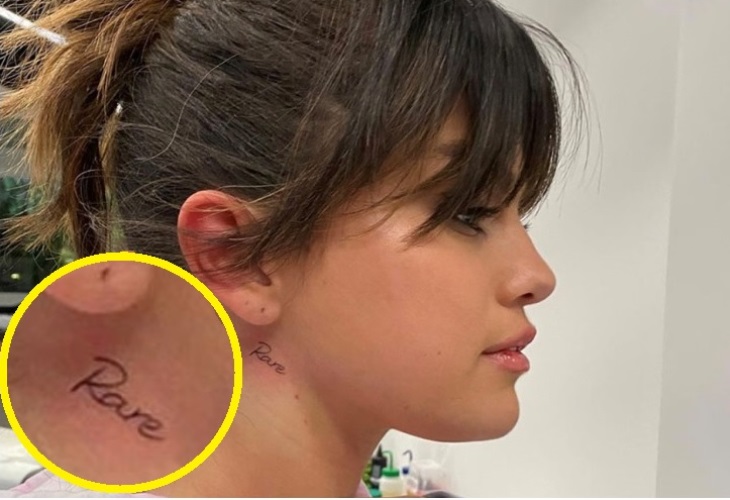 Selena Gomez got a new tattoo on her neck to celebrate her new album, but she plays a dangerous game everytime she undergoes the needle, because she has severe Lupus, which leaves her vulnerable to infection.

The “Lose You To Love Me” singer showed off the tattoo on social media. She had the album title Rare inked under hear right ear. The album was unveiled on Friday (Jan 10).

Alongside a butterfly emoji, she wrote: “Did it again @bangbangnyc … rare”

Meanwhile, Selena previously confessed the record was a “nightmare to deal with.”

“Honestly, this album was kind of a nightmare to deal with, but in the best way possible. I thought that I was so ready like two years ago …,” she said.

“I had collected all of these sessions, beautiful sessions, that I don’t even remember half of them because it evolved each year…

“And then something would happen to me and it would be very drastic, so that it would take me somewhere else. And then all of a sudden I found this healing, and I saw something bigger than what I thought that I was. And I think that also added the whole end of the album,” she added.

The 27-year-old singer worked on Rare until the last minute.

“This is four years of my life, and I think I’m completely okay with releasing it. But there had always been something that was preventing me or scaring me from doing it,” she said.

“I’m so glad that I’ve followed that gut instinct, because it’s so crazy that every single moment counts, down to literally ‘Lose You to Love Me’ and ‘Look at Her Now’ are out, but we were still, the last day, writing music that … the song I personally think is going to be one of our biggest as well.”

In August a year ago, Selena and three friends Courtney Barry, Raquelle Stevens and Ashley Cook got tattoos on a lark.

The girls had the number “4” inked into their skin while on a girl’s night out to mark pal Barry’s 26th birthday.

If they were real friends, however, they would have dissuaded Selena from getting a tattoo. Selena should also know better, as well.

Lupus is a systemic autoimmune disease that occurs when your body’s immune system attacks your own tissues and organs, according to The Mayo Clinic. The disease can be triggered by infections and also weakens the immune system, making sufferers more vulnerable.

The condition varies in severity depending on the individual, but Selena has already acknowledged that her Lupus is often debilitating. She had to undergo a kidney transplant because of the disease.

Gomez revealed last year that she’d received a kidney transplant earlier in the year from her best friend Francia Raísa.