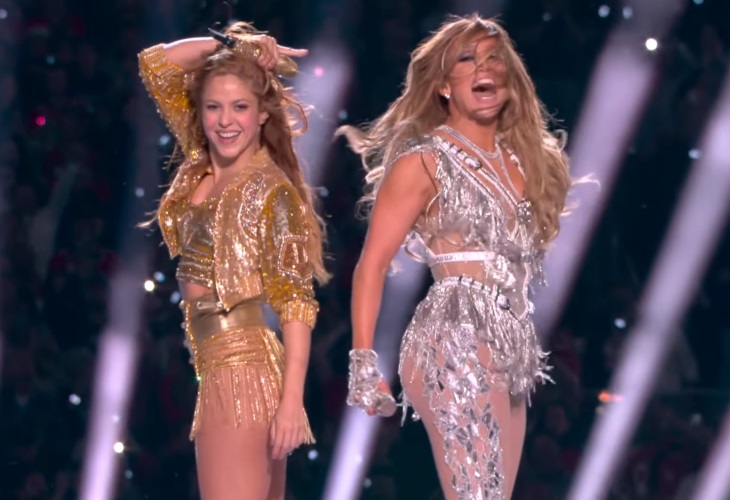 The NFL had to know what it was getting into when it put Shakira and Jennifer Lopez on the same Super Bowl stage. It got a sizzling show that left “family values” zealots and right-wing evangelists fuming.

The show’s multi-cultural, urban and Latin influence was also a big F-U to Donald Trump and his white supremacist base.

One scene in particular showed children singing in cages, a clear reference to the Trump administration policy on the border.

Lopez, known as JLo for short, was also a fireball of sexual energy. Both performers also proved age is just a number. Shakira is 43 and Lopez is 50.

The halftime show, for the first time in years, lived up to the game’s hype.

But the act did not sit well in America’s Bible belt, mostly in the rural south.

“I don’t expect the world to act like the church, but our country has had a sense of moral decency on prime time television in order to protect children. We see that disappearing before our eyes,” he said in a Facebook post.

“It was demonstrated tonight in the Pepsi Super Bowl Halftime Show — with millions of children watching,” he added.

Lady Gaga Super Bowl Fantastic; Diet, Workout That Got Her There (videos!)

Graham’s facebook post drew more than 89,000 comments and 88,000 shares, mostly from people who agreed, according to The Charlotte Observer newspaper.

“Trash show.The most DISGUSTING show to be viewed around the world. Those two entertainers are part of the problem. J-lo is a mother ABSOLUTELY no reason for that kind of a show,” wrote one commenter.

Katy Perry Gets By at Super Bowl With Help From Friends (video, pics!)

“Beyonce, her husband and children to sit during the National Anthem was DISRESPECTFUL to our military personnel who fought and died for us to be free as a country.”

One writer called the performers “Satan’s dance troupe” and yet another blamed the show on “raving left-wing progressives.”

And, there were the inevitable call for a Pepsi boycott.

But not all the comments were sympathetic to his view. “He needs to check his mirror for the log in his eye. He lost his ‘moral’ authority chasing the womanizer trump,” wrote another.

Graham is the son of the late evangelist Billy Graham, who counseled Republican presidents like Richard Nixon and Ronald Reagan. He pioneered TV evangelism to build an international following and died in 2018.

The son took up his father’s ministry and has made religion, politics, sex cornerstones of his evangelism.

The staunch supporter of President Trump, mixed them all last spring when he attacked Democratic presidential candidate Pete Buttigieg, solely because he is gay.

The result is toxic rhetoric from the likes of the younger Graham, and an ever-deepening political divide, where the partisan divisions feel increasingly like unbridgeable gulfs, according to The Washington Post.

The statement was a sharp departure from his views on Clinton’s affairs at the time.

“Clinton’s months-long extramarital sexual behavior in the Oval Office now concerns him and the rest of the world,” Graham wrote at the time of Clinton’s 1998 impeachment.

“If he will lie to or mislead his wife and daughter, those with whom he is most intimate, what will prevent him from doing the same to the American public?”

That hypocrisy aside, Shakira and JLo are winning widespread praise for their performance.

“@JLo and @shakira and all the special guests were so incredible!!! What a fun halftime show I danced and smiled the whole time. Such powerful sexy women!!!! On camera and off!!!!! Love you beautiful sexy talented women,” wrote singer Lady Gaga.

A YouTube video of the show has been viewed almost 100 million times since yesterday.

Check it out below and let us know your thoughts.