Rush Limbaugh Cancer: 25 of His Scurrilous Quotes That Could Serve as His Epitaph 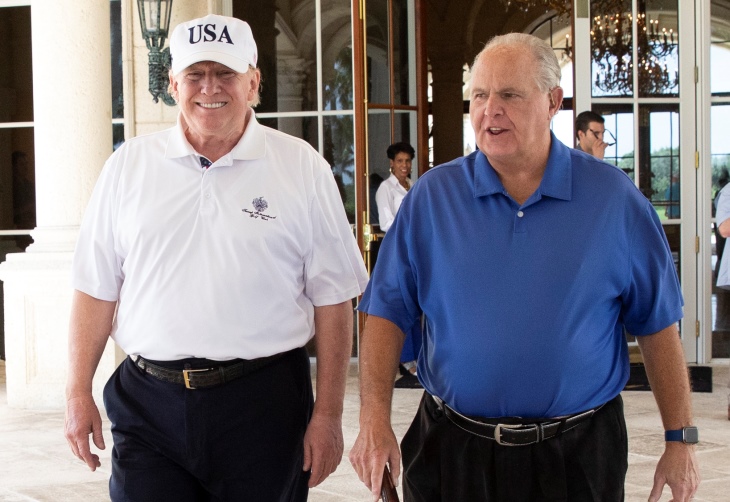 Rush Limbaugh, the bombastic, right-wing conspiracy mongering talk show host, revealed today (Feb. 3) he has potentially fatal lung cancer. Here are 25 of his scurrilous comments that could serve as his epitaph.

Try this one for starters.

“I would like a medal for smoking cigars, is what I’m saying,” he once said, denying that first or second hand smoke can lead to cancer.

(See the others below.)

Limbaugh, 69, whose broadcasting career spans more than three decades, has become a sounding board for right-wing conspiracy theories and an unabashed supporter of President Donald Trump and his more grandiose fabrications.

In 2012, Limbaugh infamously claimed that the movie “Dark Knight Rises” was a left wing conspiracy to undermine the candidacy of presumptive Republican nominee Mitt Romney.

In 2014, Limbaugh drew a connection between the murders at the University of California Santa Barbara and the movie “Hunger Games.”

“Do you know what the Hunger Games movies are about?” Limbaugh bellowed. “It’s teenagers killing other teenagers.”

Limbaugh also blamed the left for “politicizing” the murders, an apparent reference to calls for stricter gun control by the parents of the victims

Limbaugh also thew his hefty media weight behind embattled Ariz. Gov. Jan Brewer with a bizarre argument about a state anti-gay bill that stands the notion of “bullying” on its head.

Not surprisingly, some took his announcement as an opportunity to return the karma.

“Ladies and gentleman, this day has been one of the most difficult days in recent memory for me because I’ve known this moment was coming in the program today,” Limbaugh began.

Rush Limbaugh Digs In on National TV at Super Bowl

He said he was taking a few days off for tests and treatment options but would return by Thursday (Feb. 26).

The five-year survival rate for stage 4 lung cancer is 4.7 percent, which suggest Limbaugh is facing a terminal disease. But advances in lung cancer treatment could improve his chances of living longer.

Roughly 40 percent of people with lung cancer are diagnosed at stage 4, which means that the cancer has metastasized throughout the body to the brain, bones, or liver, according to medical references.

In 2003, The National Enquirer reported that Limbaugh was under investigation for illegally obtaining the prescription drugs oxycodone and hydrocodone. He admitted to listeners on his radio show on Oct 10, 2003, that he was addicted to prescription painkillers.

Given all of the invective he’s spewed over the years, it seems only fitting that his own words should serve as his epitaph. Here are 25 of his choicest statements. May he rest in peace.

24. “If you feed them, if you feed the children, three square meals a day during the school year, how can you expect them to feed themselves in the summer? Wanton little waifs and serfs dependent on the State. Pure and simple.” –2012

23. “Feminism was established so as to allow unattractive women access to the mainstream of society.” –2005

22. “[The gay community] would be so against abortion if it was discovered that you could abort what you knew were gonna be gay babies.” –2003

21. “The ocean will take care of this [ Gulf of Mexico oil spill] on its own if it was left alone and left out there. It’s natural. It’s as natural as the ocean water is.” –2005

18. “What Trump is alleged to have done is actually no different than what Barack Obama did in April last year when he made it known that he didn’t want Hillary prosecuted.” — 2017

17. “Obama regime planned the influx of illegal alien children at the border.” –2014

15. “Have you ever noticed how all composite pictures of wanted criminals resemble Jesse Jackson?”

14. “We need segregated buses… This is Obama’s America.”

13. “Feminism has led women astray. I love the women’s movement, especially when walking behind it.” –2010

12. “Cholesterol has nothing to do with heart disease. Nothing wrong with saturated fats.” –2011

11. “What is it with all of these young, single white women? Over-educated doesn’t mean intelligent.” –2012

10. “The only way to reduce the number of nuclear weapons is to use them.”

8. “The biggest killer of innocent people ever devised is poverty, which can be brought about by communism/socialism.”

7. “The NAACP should have riot rehearsal. They should get a liquor store and practice robberies.” –1992

6. “I prefer to call the most obnoxious feminists what they really are: feminazis.” –1992

5. “The NFL all too often looks like a game between the Bloods and the Crips without any weapons. There, I said it.” –2008

3. “I think cigars are just a tremendous addition to the enjoyment of life.” –1994

2. “How many people have died since the white man arrived due to lung cancer, thanks to the Indian custom of smoking.”

1. “Firsthand smoke takes 50 years to kill people. Not everybody that smokes gets cancer. Now, it’s true that everybody who smokes dies, but so does everyone who eats carrots.”