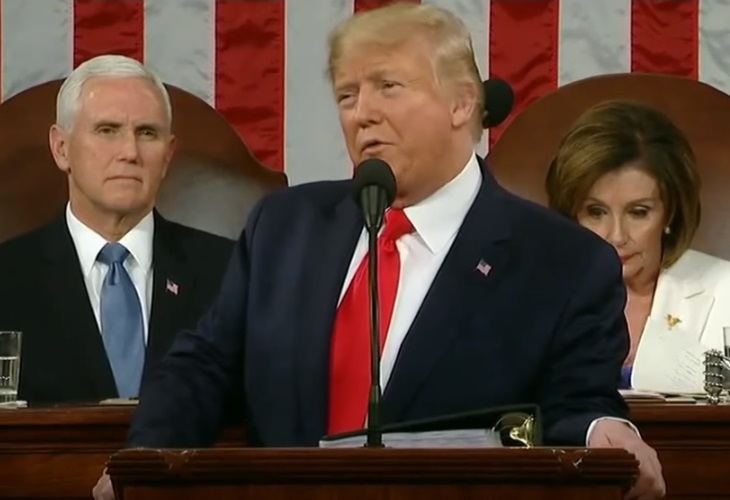 Donald Trump’s speech and posturing raised eyebrows during his State of the Union address. (Photo: ScreenCap)

President Trump’s State of the Union address put his health and mental capacity under intense scrutiny for more than an hour and social media reactions were not pretty.

Slurred speech, slouching, hanging on to the podium, obsessive sniffing and sweating, twitches and jerks and seeming paralysis in his left arm were all evident as the president spoke, according to the Twittersphere.

“The media are happy to dismiss his spasms, inability to walk or speak coherently as momentary lapses. They should be asking who’s really in charge?” one commenter asked.

But health and mental problems were spotted by more than just casual observers. Even medical professionals commented on the president.

“Trump’s dangerous brain dysfunction, inability to think straight or deal with complex issues, has been ignored by MSM in 2020. He can read, recite old tapes, but that’s all. Dems must confront the dementia, disability, mental illness,” writes one medical doctor.

“Cranked up, most likely on stimulants and Levodopa, Trump struggled all night with body jerking, teeth baring, arm trembling and a podium death grip. His dementia Tour de Force climaxed with this neurological body jerk/spasm,” another commenter writes.

Trump also raised eyebrows at his Mar a Lago Super Bowl party when he engaged in disrespectful behavior during the “National Anthem” that some called infantile and characteristic of dementia.

A brief video shows Trump greeting guests, adjusting his chair, and straightening his suit jacket as other attendees — including first lady Melania Trump and their teenage son — stand with their hands over their hearts, according to The Miami Herald.

At one point, Trump acts like he’s conducting the band. The behavior is all the more uncharacteristic because he insists that all Americans should “stand proudly” during the national anthem, and show respect for the troops and the flag.

“Trump continues to publicly humiliate himself as dementia dissolves major areas of his brain. With the self control of a 3 year old & zero awareness of what he’s supposed to be doing he clowns around during the National Anthem. It will keep getting worse,” one of his Twitter critics notes.

If Donald Trump’s Health Is Excellent, What’s the Point of Medical Science?

Trump’s videoed entrance at the Trumpettes’ gala at Mar-A-Lago with Florida Gov. Ron DeSantis also added fuel to concerns the president is ailing. That fact that he appears to be dragging his left leg in an awkward gait has been cited as further evidence he’s suffering from neurological problems or a mild stroke.

In a book published 10 months after he took office, 27 psychiatrists and psychologists issued a dire warning about Trump’s alleged personality disorders.

Although the medical profession discourages diagnosing people without first examining them, these doctors felt they had a moral and civic duty to warn America that superseded professional neutrality.

Trump’s slurred speech and brain freezes have even become the fodder of late-night television comedians.

In December a year ago, Former “Apprentice” and NBC staffer Noel Casler, who is now doing stand up comedy, revealed during one of his routines that Trump is a “speed freak” who crushes up Adderall and snorts it because of nervousness and difficulty reading.

Casler obviously had a front-row seat to Trump’s behavior during the time the president hosted his reality television show. That makes his allegations credible and alarming, and his opinion hasn’t changed.

“If you ever watched ‘The Apprentice’ what you saw was edited together,” he wrote in a recent Tweet.

“This is how Trump talks, he is a barely literate, barely functioning, drug addict. Has been since the ‘80s. Back then the cocaine and speed worked, and he sounded ‘sharp;’ it stopped working a long time ago,” he added.

“For anyone that doubts my claims of Trump long standing profound incontinence due to decades of stimulant abuse and fast food. It’s not a joke, he really does wear Depends, and it really held up shots on ‘Apprentice.’”

Trump’s cognitive abilities were questioned during the 2016 campaign after he displayed signs of early onset Alzheimer’s. His father Fred Trump developed the disease in his later years.

The president added currency to questions about his health condition when he was caught on video in November. He was being hustled to a black SUV for a ride to the hospital, accompanied by his personal physician. He had a manila envelope pinned to his jacket and his shirt collar was open.

Of course, Trump has only himself to blame for the constant concerns about his health.

It’s been a mystery that the president has worked hard to cover up, starting with the 2016 election right up until his sudden Nov. 16 hospital visit.

Trump will turn 74 in June, which is reason enough to raise questions about his health. Beyond that, he is obese–perhaps morbidly so–and looks bloated, a clear sign of heart disease.

His 2016 rival, Hillary Clinton, was attacked mercilessly by Trump, right-wing media, Fox News and conspiracy theorists, who claimed she was too ill to be president. Clinton, of course, is as strong and as active as ever.

She released a full medical report from her doctor at the time, detailing all of her medical conditions. Trump, on the other hand, released a one-page letter signed by Harold Bornstein, his doctor of 35 years.

The letter was considered suspect at the time, with good reason. It later proved to be fraudulent. “He dictated that whole letter. I didn’t write that letter. I just made it up as I went along,’ Bornstein told CNN in 2018.

Check out the full State of the Union address below.