Keith GirardFebruary 10, 2020MUSIC
Eminem made a surprise appearance--literally--at the Oscars to sing his hit song from 2003! Say What? (Photo: Bang ShowBiz)
Home
MUSIC 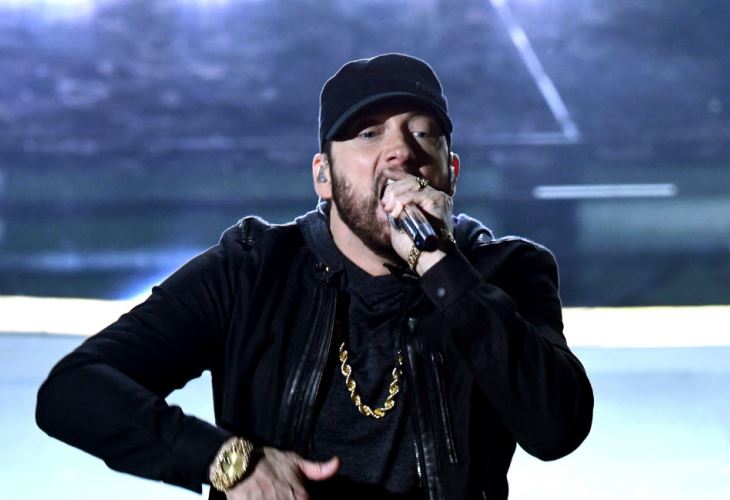 Eminem made a surprise appearance–literally–at the Oscars to sing his hit song from 2003! Say What? (Photo: Bang ShowBiz)

Eminem gave a surprise performance of his 2003 Oscar-winning rap classic “Lose Yourself,” but he paid a price for his long hiatus from the spotlight. Celebs in the audience didn’t recognize him–or the song.

The 47-year-rapper didn’t help himself. He looked much heavier and pulled a cap low over his face, also hidden by a scruffy beard.

He also kicked off the song unannounced.

The song actually won the Best Song Oscar– in 2003– from his movie “8-Mile” a reference to his first recording studio.

Eminem’s appearance followed a montage of some of cinema’s most iconic songs and how they can help elevate the films they are featured in.

No surprise the audience was surprised. The confusion seemed to be skewed between young Hollywooders and the older set, who likely never got into rap.

Things began to come into focus as the song progressed; Eminem’s voice was unmistakable. The performance wasn’t totally out of character. The song is an inspirational rap about the emotions of performing in front of an audience.

Most other performances were familiar.

Earlier in the evening, Janelle Monae kicked off the event with a performance of “A Beautiful Day in the Neighborhood” from the Tom Hanks film of the same name, paying tribute to the late TV childrens’ star Fred Rogers.

At one point, she sang directly to Hanks, who portrayed the beloved children’s entertainer. After giving him her hat to wear, she took of her cardigan to belt out an original song dedicated to the year’s nominees.

She was briefly joined by “Pose” star Billy Porter during the segment, and finished off with a swipe at the lack of female directing nominees and recognition for black actors.

“We celebrate all the women who directed phenomenal films… Happy Black History Month,” she jibed.

Idina Menzel was joined for her performance of “Into the Unknown” from “Frozen 2” by nine of the other actresses who portrayed Queen Elsa around the world.

“This Is Us” actress Chrissy Metz performed at the ceremony for the first time, wowing the audience with a powerful rendition of “I’m Standing With You” from her film “Breakthrough.”

Cynthia Erivo was joined by a gospel choir when she took to the stage to sing “Stand Up” from her movie “Harriet.”

Randy Newman sat at a Steinway piano on a set of fake clouds with a blue sky backdrop for a jaunty rendition of his 13th Oscar-nominated song, “‘Toy Story 4’s” “I Can’t Let You Throw Yourself Away.”

Sir Elton John was the final Best Song nominee to perform. He sang “I’m Gonna Love Me Again” from “Rocketman,” which went on to win the award.

The 72-year-old singer performed seated at a red grand piano, wearing a bright purple suit with a pink shirt, in front of a colorful set and a giant pair of star-rimmed glasses.

Oscars co-producer Lynette Howell revealed that Emenim’s appearance had been in the works for some time.

“So we reached out [to Eminem] to see if that was something he might want to be involved in. He said yes,” she told People.

“We’ve been holding onto it for a while. It was nice that we surprised people – we don’t usually get to surprise anybody in this day and age!”