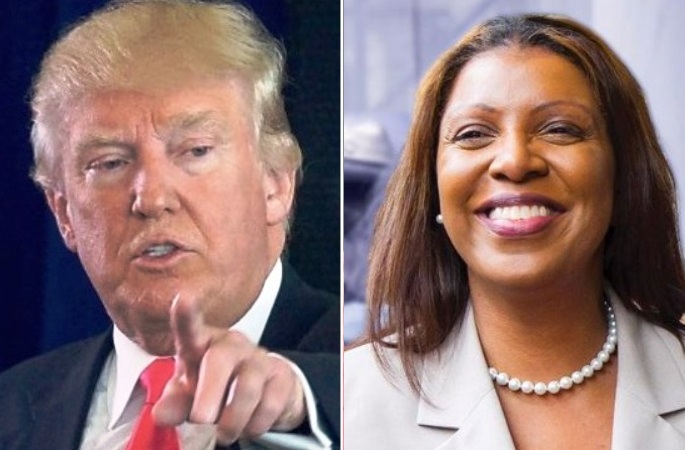 New York Attorney General Letitia James and 18 other state attorneys general have filed a new lawsuit asking a federal court to block the use of federal funds for construction of Donald Trump’s wall on the southern U.S. border.

The New York attorney general’s office has waged a legal campaign against Trump’s actions as a businessman and as president, scoring significant victories along the way.

The state shutdown the Donald J. Trump Foundation last year for engaging in ethical and legal violations, including failure to register in New York, self-dealing and illegal campaign contributions.

Last November, Trump was ordered to pay a $2 million settlement for misusing the foundation for business and political purposes. The foundation has since gone out of business.

Trump was also ordered to pay $25 million to settle a lawsuit charging that one of his business entities, Trump University, defrauded students. Trump had vowed never to settle the case, also brought by New York state.

Earlier this month, Trump tried to condition his administration’s policies toward New York to a demand that the state drop investigations and lawsuits related to his administration as well as his personal business and finances, Politico reported.

Rep. Val Demings (D-Fla.) charged that the president was “expanding his abuse of power to blackmailing U.S. states (threatening millions of people he supposedly works for).”

“He’s holding New York state hostage to try to stop investigations into his prior tax fraud,” he added.

Trump recently blocked New York residents from using Global Entry and other “trusted traveler” programs that make it easier to travel overseas and board airplanes.

Trump’s border wall has been another magnet for litigation.

A federal appeals court overturned a lower court ruling in January and stayed an injunction blocking the Trump administration’s use of military construction funds to build the border wall.

The 5th Circuit Court of Appeals in New Orleans, lifted the injunction issued blocking expenditure of the funds issued by a court last December in Texas.

The three-judge appeals panel, in a 2-1 ruling, granted the administration’s request to temporarily stay the injunction, signed by U.S. District Judge David Briones of El Paso.

Congress appropriated the $3.6 billion to the Department of Defense for 127 construction projects, not the border wall, Briones had ruled.

The appeals court judges did not provide a reason for the reversal, other than noting that the Supreme Court recently stayed a similar injunction.

Dissenting judge Stephen Higginson wrote that the administration did not prove it would suffer irreparable harm under the injunction, according to USAToday.

“For the second consecutive year, the Trump Administration has circumvented the will of Congress by redirecting billions of dollars appropriated for the procurement of equipment by state National Guard units in order to build a wall along the U.S.-Mexico border,” said James in a statement.

“President Trump is risking the safety of every American by diverting taxpayer dollars from our military to fund the same xenophobic campaign promises he’s made for the last four years,” James added.

“The courts have already once rejected the president’s unlawful attempt to shift funds to his hateful pet project, so as long as this Administration continues down the path of illegally subsidizing an ill-advised border wall we will not hesitate to take action.

“We will not stand for this abuse of power and will fight it using every tool at our disposal.”

Congress has repeatedly rebuffed the president’s insistence on funding the border wall, providing limited funding for fencing along the border in the 2019 and 2020 budgets.

Of course, the president’s campaign promise to make Mexico pay for the wall has proved to be hollow.

The lawsuit argues that the diversion of funds violates the principles of separation of powers, the Presentment Clause and the Appropriations Clause of the U.S. Constitution by usurping Congress’s appropriation powers.

The coalition further asserts that the Trump Administration fails to satisfy the legal requirements necessary to divert the funds and disregards the National Environmental Policy Act by failing to consider the environmental impact of construction.

The diverted funds will be used to construct a wall on the borders of California and New Mexico, which pose imminent environmental harm to more than 100 sensitive plant and animal species, the suit contends.

Last year, a coalition of attorneys general filed a similar lawsuit challenging President Trump’s 2019 declaration of a national emergency. The declaration was used as a justification to divert $1.6 billion in federal defense department funds appropriated by Congress to build a border wall.

In December, the U.S. District Court for the Northern District of California ruled that the president’s attempts to use military funding to build his border wall were illegal. An appeal is currently pending in the U.S. Court of Appeals for the Ninth Circuit.

Trump asked for nearly $6 billion to build the border wall in 2018, but Congress only appropriated $1.4 billion for border wall projects, mainly earmarked for maintenance on existing fences.