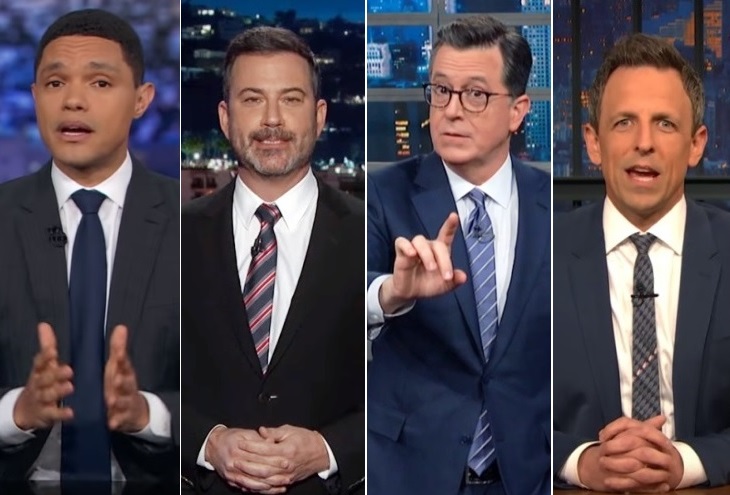 Donald Trump has been lampooned for a lot of things on late night television, but never before has his rote incompetence become the subject of comedy routines like it was last night.

The coronavirus outbreak in the United States has brought out the worst in the president… and it’s pretty funny as well as a little sad.

From firing the White House pandemic response team in 2018 to pronouncing coronavirus tests “beautiful” like his Ukraine telephone call, Trump is instilling about as much confidence as Jack the Ripper might on a foggy London night.

“This is the first crisis of Trump’s presidency that he did not cause himself, and he is shankin’ it,” opined Stephen Colbert. “Instead of monitoring the situation, Trump spent the weekend golfing.”

He pronounced Trump a “monster” for comparing coronavirus deaths to the annual number of people who die from the flu in a Tweet.

“Here’s the thing… we can criticize Trump for golfing and tweeting, but when he hunkers down and focuses on the problem that’s when he really sucks,” he jibed.

Trump made an absolute fool of himself at a news conference at the Centers for Disease Control when he claimed he was the best person to handle the pandemic because his uncle was a professor at MIT.

The faces of the scientists and doctors next to him said it all. But in case you missed their body language, Colbert summed up the situation.

“No, no, he’s right. I would be very surprised if he understands it,” he said. “I don’t care how smart your uncle was,” he added emphatically. “You don’t get your mother’s eyes and your father’s PhD.”

Trump drew some of his biggest howls for his position on the cruise ship circling off the California coast with six confirmed coronavirus cases out of about 2,000 on board.

“I mean, frankly, if it were up to me, I would be inclined to say, ‘Leave everybody on the ship for a period of time and use your ship as your base,'” Trump said.

Then Trump revealed the reason for his thoughts; he didn’t want the number of cases to go up by allowing the infected passengers on land. Talk about cruel and unusual punishment.

“I don’t need to have the number [of patients] double because of one ship that wasn’t our fault,” he said.

Seth Meyers, who tackled the crisis in his “Closer Look” segment was flabbergasted.

Meyers also pulled no punches about the president’s incompetence. He opened his segment with this:

“As the president continues to lie about the coronavirus outbreak, we are now seeing what it’s like when a lifelong scam artist is in charge of responding to a public health crisis.”

Trump proved the old adage that a capitalist will sell you the rope to hang him with by pronouncing the virus good for business. He said it would cause Americans to stay home and spend their money in the United States. Or how about just stay home and not spend money at all?

The stock market, of course, plunged more than 7 percent, the largest single drop in history, after Trump’s comments.

Meyers noted that Trump appeared to be getting his information on the virus, not from doctors, but from Fox News, which he plugged.

“Why are you getting your information from Fox News? You’re at the CDC. You’re completely surrounded by doctors. Just turn around and ask one of them!”

“And you can tell the cult of personality that insulates Trump from dissent is having an impact, because Trump appointees keep going out of their way to compliment him in situations where it’s totally unnecessary,” Meyers noted.

“I know a lot of people are scared right now,” he said. “but there is no need to fear, my friends, because, you see, the stable genius in chief is on the case and he’s gonna do everything he can to help all of through this thing… unless you’re already sick. Then you’re on your own.”

“By the way, I’m not sure Trump has a natural ability for science, especially considering that he thinks scientific knowledge can be passed down through his uncle,” Noah said.

Trump is a self-professed germaphobe, and that did not go unnoticed on “Jimmy Kimmel Live.”

“The president, publicly, seemed determined to keep shaking hands. He has said that and that he will not cancel his rallies,” Kimmel said.

“But a report today from Vanity Fair says he is privately terrified about getting the virus, and thinks journalists will purposely try to contract the virus to give it to him on Airforce One,” Kimmel noted.

Check out the video below, and have a laugh while you can.