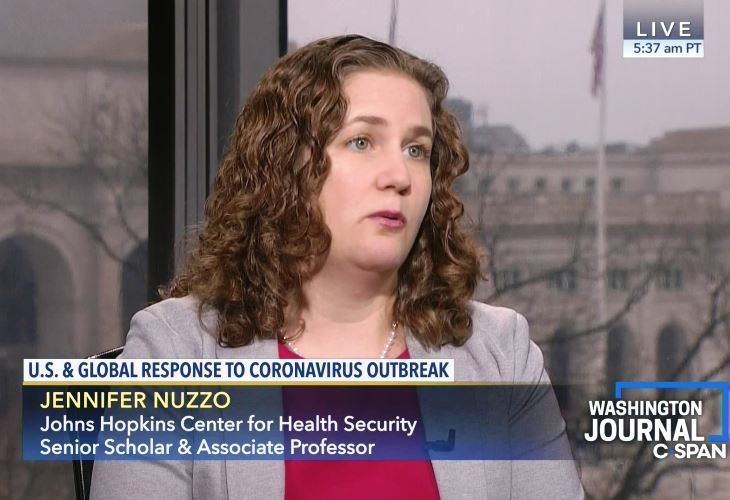 President Trump’s European travel ban, announced last night (Mar. 11), is unlikely to prevent the spread of coronavirus, since the illness is already circulating within the U.S. population.

Jennifer Nuzzo, associate professor and senior scholar at the Center for Health Security, Johns Hopkins University, told the House Foreign Affairs Committee yesterday that a travel ban will do little to halt the virus’s spread.

“First, we need to seriously reexamine our current policy banning travel from China and quarantining returning travelers,” Nuzzo said. “All of the evidence we have indicates that travel restrictions and quarantines directed at individual countries are unlikely to keep the virus out of our borders.”

The United States imposed travel bans and quarantines during the 2009 Swine flu pandemic, and they failed to stop the spread of that virus, Nuzzo advised.

Travel bans targeting specific countries like China, or broad regions like Europe, could have a negative effect by encouraging the under-reporting of cases.

“Travel bans and quarantines will make us less safe if they divert attention and resources from higher priority disease mitigation approaches that we know are needed to respond to cases within the United States,” Nuzzo said.

Quarantines that restrict the movement of healthy people are not routinely used in public health emergencies.

“It’s reserved for a small group of people, such as in a measles outbreak and within a vaccine-hesitant community. The circumstances surrounding the coronavirus do not meet these standards,” Nuzzo said.

She called for an increase in emergency funding, similar to the amount spent in 2009.

Other countries have been successful containing the virus because of widespread testing, said Jennifer Bouey, senior policy researcher and Tang Chair in China Policy Studies at RAND Corporation.

“Because of the rapid identification of the virus, many countries, including the United States and China, can now quickly develop a testing kit, monitor the genetic mutations and have a better understanding of transmission,” she told the committee.

The president, however, failed to mention any effort to increase testing in the United States during his address to the nation. That led critics to contend the administration is limiting testing for political reasons to avoid inflating the number of cases.

In any case, the nation has been extremely slow in conducting widespread diagnostic testing for the Covid-19 strain of the disease. The problem has been attributed to a combination of manufacturing problems, chronic underfunding and an apparent lack of foresight.

“I think that we could have probably controlled this, if we had effective testing,” Angela Rasmussen, a Columbia University virologist, told Vox.

In 2018, Trump fired the White House pandemic response team, which could have charted a course of action for the latest outbreak.

Ron Klain, the Obama administration’s Ebola Response Coordinator from 2014-2015, told the committee that several comparisons could be made between the coronavirus response and how the United States handled the 2014 Ebola outbreak.

“There should be a single high-level official inside the National Security Council overseeing the response,” Klain said. The 2014 Ebola outbreak also prompted the first-ever deployment of U.S. troops to deal with an epidemic.

In New York, Gov. Andrew Cuomo has deployed National Guard troops around the New York City suburb of New Rochelle, which has been identified as a coronavirus hotbed.

Klain agreed that an isolationist policy will not effectively combat the virus.

“We don’t have a travel ban, we have a travel Band-Aid right now,” he said, adding that monitoring everyone carefully “is the only practical thing we can do.”

“The challenge here is that we are talking about a respiratory virus that can potentially spread between people quite quickly,” Nuzzo said.

“It is very difficult to know where the disease is spreading, because you can’t get ahead of it in terms of your surveillance. Those are the circumstances that make quarantine challenging, because we don’t know who we should be quarantining fully.

“We may decide based on the number of cases in China that we should quarantine travelers from China, but we don’t know if travelers from other countries have the virus. We also don’t know if it’s already here, because we’re only testing people who have a connection to China. So that makes it challenging.”