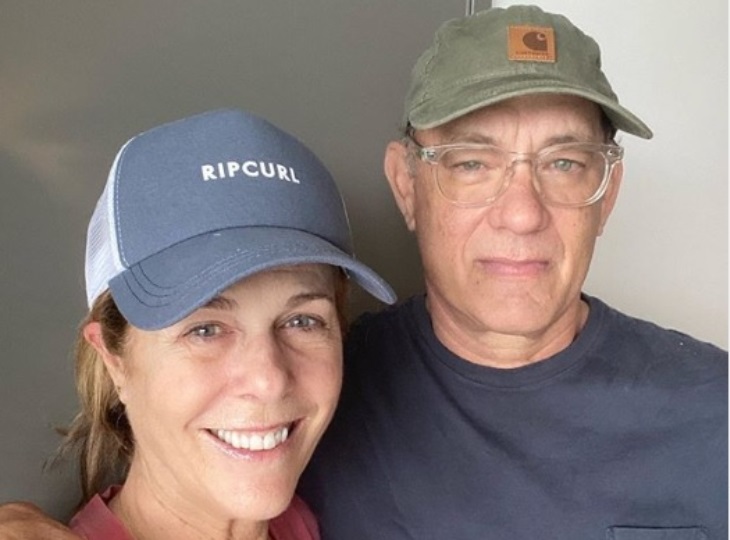 Tom Hanks and wife Rita Wilson started a trend when they revealed they had been infected by the Covid-19 virus, otherwise known as the coronavirus. More than half a dozens celebs have followed suit.

Hanks statement on Wednesday brought home the fact that the coronavirus is real, and that no one is immune.

Hanks tweeted that he and Wilson had been screened for COVID-19 after feeling a “bit tired” and “like we had colds.”

“To play things right, as is needed in the world right now, we were tested for the Coronavirus and were found to be positive,” the actor, 63, wrote

He said they were tested, observed and would be isolated “for as long as public health and safety requires.”

The World Health Organization (WHO) declared the coronavirus a pandemic on the same day, and President Trump declared a national emergency on Friday (Mar. 13).

“Hello folks. Rita Wilson and I want to thank everyone here Down Under who are taking such good care of us. We have Covid-19 and are in isolation so we do not spread it to anyone else,” he said.

“There are those for whom it could lead to a very serious illness. We are taking it one-day-at-a-time. There are things we can all do to get through this by following the advice of experts and taking care of ourselves and each other, no?”

“From here on out, the only Corona I want is from Mexico and you drink it,” Wilson Tweeted.

Here’s a rundown of celebs who have reported infections or self-quarantines because of the virus.

The “Frozen 2” star wrote on Instagram yesterday (Mar. 16) that she has the respiratory illness. She gave fans a full timeline of her symptoms to help spread awareness of the condition.

“Hey guys, I tested positive for Covid-19 and have been in quarantine the last week. Unsure of what the next step is (been getting mixed info so will keep you posted) but obviously will remain in quarantine until told to do otherwise. I’m feeling better but I will be posting some info that I hope will be helpful to some.

“Let’s please be mindful of our decisions – now is the time to be smart and responsible. Let’s take care of one another!! xx”

The 26-year-old actress said her symptoms included sore throat, fatigue and a headache on day one. The next day she developed a mild fever (101.0 F) and “horrible body aches, chills, sharp pain in lungs, started a dry cough, no appetite.”

On day three, her fever subsided and body aches eased, but her lungs got much worse from a “deep, dry cough.” She also had shortness of breath, major fatigue and no appetite.

She said her infection seemed to take a turn for the better on day four. “Symptoms finally seemed to become more mild, however, lungs remained heavy and short of breath. Also randomly lost my sense of smell and taste. Still no appetite.”

Symptoms continued over the next three days, but she said she started feeling “more like myself,” with “shortness of breath, loss of appetite, fatigue and no taste/smell but overall, doing okay.”

Tellingly, she said she had trouble getting tested.

“Important!! Been getting a lot of questions in regards to tests. The reality is.. they are INSANELY hard to come by. Our country is very behind and we don’t have much of a system in place.”

“If you have any symptoms at all but can’t find a test please just treat yourself as if you are positive (you most likely are). Rest, drink lots of liquids and SELF QUARANTINE. This obviously doesn’t apply to everyone. Some people are at higher risk and will take different precautions.”

The “Game of Thrones” star, who played Tormund Giantsbane in the HBO fantasy series, revealed on Monday (Mar. 16) he has been self-isolating at home as a result of Covid-19.

Game of Thrones actor Kristofer Hivju posted this photo to announce his exposure to the virus. (Photo: Instagram)

“Greetings from Norway! Sorry to say that I, today, have tested positive for COVID19, coronavirus. My family and I are self-isolating at home for as long as it takes. We are in good health – I only have mild symptoms of a cold.”

The 41-year-old actor, who is in a high-risk group because of his age, urged others to do their bit to help protect the “entire community.”

“There are people at higher risk for who this virus might be a devastating diagnosis, so I urge all of you to be extremely careful; wash your hands, keep 1.5 meters distance from others, go in quarantine; just do everything you can to stop the virus from spreading. Together, we can fight this virus and avert a crisis at our hospitals.”

Kristofer is starring in the cable TV series “The Witcher,” which has suspended production for two weeks.

“The coronavirus has raised challenging issues for everyone working on set on productions for Netflix. We are very grateful for all the work everyone has done to keep cast and crew safe during this pandemic,” he wrote.

The “Luther” star also revealed on Monday (Mar. 13) he had been diagnosed with the virus and has been isolating since his potential exposure.

“This morning I tested positive for Covid-19. I feel ok, I have no symptoms so far but have been isolated since I found out about my possible exposure to the virus. Stay home people and be pragmatic. I will keep you updated on how I’m doing … No panic.” he wrote.

The 47-year-old actor also posted a two-minute video alongside wife Sabrina Dhowre Elba. He said she had not been tested for the virus, and urged people to take COVID-19 seriously and practice social distancing and washing hands.

The Ukrainian-born French actress and model, best known for her role in James Bond film, “Quantum of Solace,” announced on social media she has tested positive for coronavirus after suffering from fever and fatigue.

“Locked up at home after having tested positive for Coronavirus. I’ve actually been ill for almost a week now. Fever and fatigue are my main symptoms. Take care of yourself and do take this seriously!” Kurlenko, 40, wrote on her Instagram page.

Although, perhaps, better known as a model, the 5-foot, nine-inch tall actress has worked steadily in films going back to 2005 French drama “The Ring Finger” (French title: “L’Annulaire”)

The 40-year-old actress is social distancing herself from husband Robbie Williams after he traveled to Australia for work in the middle of the coronavirus pandemic.

The former “X Factor” judge confirmed that Robbie is being kept out of the Los Angeles mansion – where they live with their four children, daughter Teddy, seven, son Charlton, five, 18-month-old daughter Colette and newborn boy Beau .

“So we’re just social distancing right now, a lot of people have been asking what social distancing is and I’ve looked it up … And it’s just staying away from bars, restaurants and clubs and your own husband if he’s been to Australia on a plane and in an airport,” she wrote.

The former “Take That” singer says he doesn’t feel ill, but he just isn’t allowed inside the home where his kids and mother-in-law Gwen are living with his wife.

They posted a comedic video take-off on Romeo & Juliet to highlight their plight.

The tennis star has urged everyone to stay safe as she revealed herself, her husband Alexis Ohanian and two-year-old daughter Alexis Olympia, will be remaining on their own for over a month due to her social distancing.

She revealed she’ll spend “the next six weeks in solitude.”

“Being a wife. Being a mom. Cooking. Cleaning. Spring cleaning. Face mask. Makeup tutorials. I’ll let you know how it goes … stay safe everyone,” she wrote.

“We’re all going to have a lot of extra family time at-home in these coming weeks. It’s going to be hard, but we’ll persevere – and as a country, I hope this unites us against a common enemy that doesn’t discriminate based on our voting habits.

“It’s not a time to panic, but it is a time to be prudent and responsible – especially because the most vulnerable among us are very much at risk,” her husband added.

The 43-year-old actor says he’s feeling no ill effects after returning home, following suspension of production on his show “Carnival Row,” which had been filming in Poland.

Fiancee Katy Perry, who is expecting their first child, is also healthy. Katy left Australia on Friday (Mar. 13) after a 24-hour quarantine in her Sydney hotel.

“Hey guys, thank you all for your concern,” wrote Bloom.

“Just to be clear, our production of Carnival Row season 2 was suspended by Legendary and Amazon Prime Video as a wise precautionary measure due to the events unfolding globally regarding COVID-19. There have been no reported cases of COVID-19 on our set or on our production.”

Orlando previously revealed he was heading to the United States and would go into quarantine once he arrived.

“Self-quarantine. It seems really crazy actually this whole corona thing, but do the right thing by you and your family and stay safe. A few weeks, we’ll beat this bad boy,” he wrote.

The 41-year-old DJ and record producer is social distancing himself from his sons after being in contact with “hundreds of people” amid the coronavirus outbreak.

He decided to stay away from his sons Lockett, nine, and Lazer, five, amid the global pandemic, because he can’t be certain he isn’t carrying the illness, and doesn’t want to spread it to his children or their grandmother.

“I have been in contact with hundreds of people in the past four weeks… And I’m staying away from the house until I am cleared of the virus,” he revealed.

“My son’s are too young to understand the complexities of what’s happening. But they aren’t anxious and nervous like the rest of us. They live in a house with their grandmother who is the most vulnerable.”

Diplo, real name is Thomas Wesley Pentz, also encouraged people to “think about others” when trying to deal with the virus, because it has proven particularly dangerous for the elderly, as well as those with underlying medical conditions.

“Think about others in every decision you make in the coming weeks. This isn’t a drill.. We already have enough news from Italy Iran Korea and China about the best ways to slow this.

The number of coronavirus cases in the United States has more than doubled since Friday to 4,000 infections. The public has been urged to take drastic steps to curb virus spread.