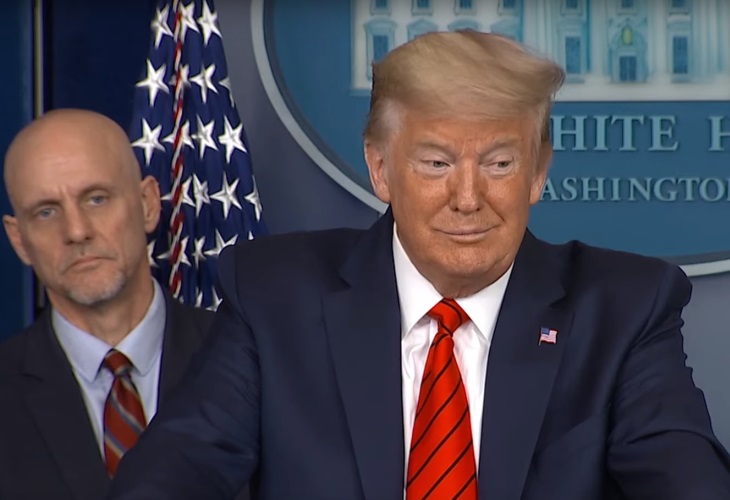 Donald Trump today attacked major media outlets from the conservative Wall Street Journal to the hard-hitting Washington Post in an unfolding campaign to rewrite history and cover-up his early missteps in the coronavirus pandemic.

Trump broadly attacked the media during the Coronavirus Task Force news briefing at the White House.

For more than 60 days beginning in January, Trump played down the threat, costing precious time that could have speeded a response and limited the spread of the disease. Last Friday (Mar. 13) Trump finally changed course, declaring a national emergency. The move finally freed up financial resources to assist Americans affected by the health crisis.

At the same time, Trump and his minions began an effort to cover up his initial lax response to the virus, which has been reported on extensively by the news media.

Trump stepped up the campaign at the news conference.

He started by blaming the Chinese for withholding information about the virus when it first emerged in Wuhan, the sprawling capital of Central China’s Hubei province.

“The whole world is suffering because of it,” he charged. He shifted his attention to the media when a reporter asked why the United States was not more prepared with testing.

“We were very prepared. The only thing we weren’t prepared for was the media,” he said. “The media has not treated it fairly.”

He accused the media of calling him a “racist” because of the ban. “Many people in the room called me ‘racist’ and other words because I did that, because I went so early.”

“But the media doesn’t acknowledge that,” he continued. “They know it’s true but they don’t want to write about it.”

Hospitals across the country are desperate for medical supplies, and testing kits are still not available in numbers needed to get a grip on the extent the virus has spread.

Trump proceeded to answer questions about the virus until reporter Chanel Rion from One America News Network, also known as One America News, a far-right news and opinion channel, advanced a right-wing conspiracy theory.

“Do you consider the term Chinese food racist?” she asked. “Because it’s food that originates in China or has Chinese ingredients.”

It was the perfect set up.

“No I don’t think it’s racist at all,” the president replied, smirking as the reporter continued.

“On that note, major left-wing news media, even in this room, have teamed up with Chinese Communist Party narratives, and they’re claiming you’re a racist for making these claims about Chinese virus.

“Is it alarming that major media players just to oppose you are consistently siding with foreign state propaganda, Islamic radicals and Latin gangs and cartels and they work right here at the White House with direct access to you and your team?”

The question was so off-base, Trump should have dismissed it out of hand. Instead he chose the opportunity to attack the media.

“Because, you see, I know the truth,” Trump continued. “And, people out there in the world they really don’t know the truth, they don’t really know what it is. They use different slogans and different concepts for me almost every week trying to catch something,” he continued.

Trump insisted there was no chaos in the White House over the crisis. “I’m the one telling everyone to be calm.”

He went on to accuse the media of writing stories “without calling anybody” or attempting to speak with him directly… “ever, that I know of.”

He singled out a Wall Street Journal report today that members of Trump’s administration were completely clueless about the massive shortage of coronavirus test kits that have hampered efforts to slow the spread of the disease.

“Some White House aides learned of complaints about the availability of testing from the media, not the public-health officials in their own government,” the story asserted.

The Journal, citing sources, reported that administration officials only really started to take the problem seriously in the first week of March, when the crisis had already erupted throughout the country.

The reporting jives with Trump’s public statements beginning in January through March.

Trump insisted his administration is getting high marks from governors around the country, including California Democratic Gov. Gavin Newsom, whom he’s fought with in the past.

“Then you read this phony story in The Wall Street Journal,” Trump complained. “Or The Washington Post is going wild, lately, I don’t know what happened to them.”

“If we had an honest media in this country, our country would be even a greater place,” he said.

Despite the fact that newspapers with reporters in the room were attacked, Trump cut off any further questions, denying them a chance to ask follow-up questions.

OAN, a San Diego based cable outlet, has bureaus in New York and Washington. Although it’s audience is minimal, it has full White House press credentials.

The channel has also been noted for promoting falsehoods and conspiracy theories.

Since Trump’s about face on the virus pandemic last Friday, he’s stepped up his attacks over news media reports of his lies and misrepresentations about the virus and his administration’s response.

Any criticism designed to hold his government accountable for its failures is widely attacked as “fake news.”

Media critics have noted that his criticism has escalated during this crisis.

“Early on, Trump raged at the media for supposedly hyping coronavirus to rattle the markets and hurt him politically. Then, on Friday, after declaring a national emergency, he railed at the media for claiming he failed to take the virus outbreak seriously.

Trump has ramped up his attacks on the media at a time when the need for accurate information is critical.

Yet on Monday morning, as the coronavirus crisis intensified, the Trump campaign zapped out an email to thousands, if not millions, of people, with the subject: “It’s all FAKE NEWS all the time,” according to Mother Jones magazine, a frequent critic of the president.

The letter, addressed from the Trump campaign and the Republican National Committee, claimed the news media are engaging in a conspiracy to protect Democrats.

“They are truly the Enemy of the People!” it said, echoing a familiar Trump refrain.

In January this year, the nation had a chance to get on top of the virus before it inevitably spread around the globe. But Trump was so deep in denial the federal government, as he put it much later, was “blindsided.”

Check out the video below. The exchange takes place at 1:11:44 into the 1:19 minute news conference.