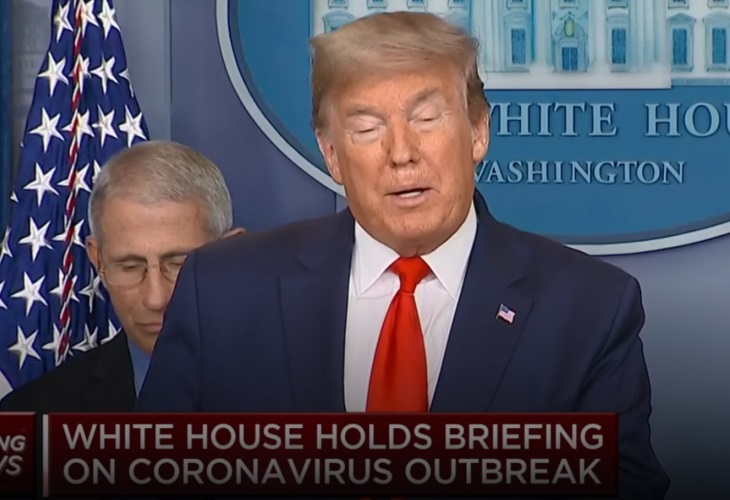 Donald Trump’s desire to rollback social distancing and other virus protections and reopen the economy by Easter is another flight of fancy.

Trump, yesterday (Mar. 24) said he hoped to see churches packed by Easter. Health officials say such a scenario would be a recipe for disaster.

Easter is April 12, less than three weeks away.

“We’re opening up this incredible country. Because we have to do that. I would love to have it open by Easter,” Trump said at a Fox News town hall.

As has been the case with many of his statements during the crisis, Trump walked back his Fox News comments last night.

“We’ll only do it if it’s good,” Trump said. “I just think it would be a beautiful timeline.”

Trump insisted he would work with administration health experts.

“Our decision will be based on hard facts and data as to the opening” of the economy, Trump said. “Every decision is grounded solely in the health, safety and well-being of our citizens.”

The ultimate power to make those decisions rests with state and local governments. He would have to have the cooperation of governors and even city mayors to make it happen.

“I don’t understand what these Trump comments are even about. The lockdown measures are being imposed by states, counties, and cities. Is he going to sue them? Send mean tweets?” wrote one Twitter commenter.

Under the 10th Amendment of the Constitution, powers not expressly delegated to the federal government are reserved for the states. Trump would have to launch a major legal challenge to wrest that power away.

The New York Independent reported Monday (Mar. 23) that Trump appeared ready to put the nation at risk of the pandemic to restart the economy, and hopefully spark a stock market rebound that would save his battered presidency.

Only three months ago, Trump was counting on the strong economy and record stock market gains to power his re-election efforts. But since then, the market has given up all the gains during his administration and business is in a virtual lock down.

Meanwhile, the COVID-19 coronavirus has spread to every state in the union. Specific states like New York, Washington and Florida have been particularly hard hit.

New York Gov. Andrew Cuomo has been leading the fight against the virus his state, which has become the epicenter of the virus outbreak.

Cumo has urged Trump to use the Defense Production Act to marshal resources and compel businesses to produce medical equipment, such as ventilators and face masks.

Equipment shortages in New York and other states are putting health workers at risk as coronavirus cases swell. Confirmed cases are still rising nationwide and around the world. So far, Trump has refused to act.

The United States now trails only China and Italy in the number of confirmed cases. Just over 55,000 infections have been reported, according to Johns Hopkins University which is tracking the pandemic. More than 800 people have died, nationally.

The nation was caught flat-footed by the virus after the Trump administration failed to act for nearly three months when the first cases surfaced in Washington state.

Intelligence agencies warned of the coming pandemic in January.

State lawmakers have taken the initiative to close schools and businesses and order people to stay indoors to limit the virus.

After initially fumbling a response to the pandemic, Trump, last Monday (Mar. 16), suggested stricter guidelines than most states. He told Americans to avoid gatherings of more than 10 people and to stay away from various public places for at least the next 15 days through Mar. 30.

But on Sunday night (Mar. 22) he abruptly reversed himself. “WE CANNOT LET THE CURE BE WORSE THAN THE PROBLEM ITSELF. AT THE END OF THE 15 DAY PERIOD, WE WILL MAKE A DECISION AS TO WHICH WAY WE WANT TO GO!” he Tweeted in all caps.

He’d apparently picked up the refrain from a Fox News talking head. Since then, Fox News and the president’s advisers have been echoing the same refrain.

“The president is right,” said Trump economic adviser Larry Kudlow on Fox News. “The cure can’t be worse than the disease, and we’re going to have to make some difficult trade-offs.”

“At some point, you have to ask yourself whether the shutdown is doing more harm than good,” he said later on CNBC.

After a marathon session on Capitol Hill, lawmakers announced agreement on an estimated $2 trillion economic stimulus package. It includes direct checks to households making less than $75,000 a year and expands unemployment-insurance.

It also makes loans available to businesses and increases spending on health-care.