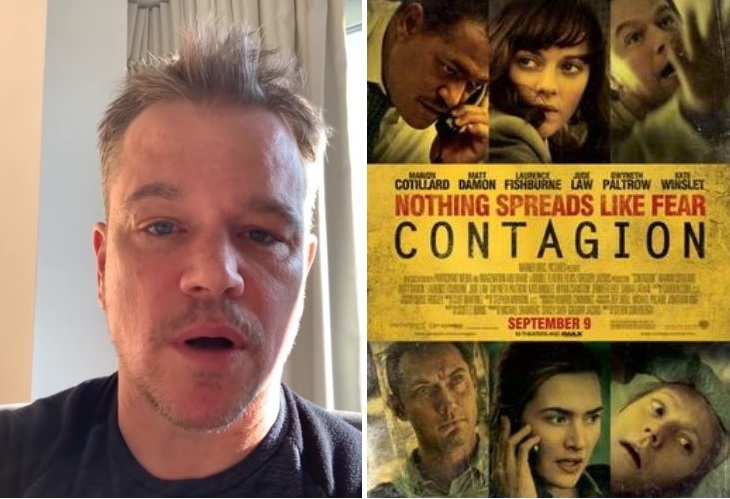 Matt Damon leads the cast of the 2011 thriller “Contagion” in a series of compelling public service announcements to defeat some of the “rampant misinformation” about a real contagion–the COVID-19 pandemic.

Who knew a 2011 potboiler about a worldwide contagion would seem so relevant today?

Particularly compelling is the subtle dig the PSAs take at Donald Trump. Each video spot stresses that the information has been “vetted by public health experts and scientists.”

Trump, on the other hand, and his chorus of right-wing media sycophants, are pushing back pleas by health officials. Trump is advocating for an end to social distancing and other steps taken to contain the virus and reopening the economy by Easter, just three weeks away.

Such a move, however, would lead to a huge spike in cases and likely thousands more deaths.

“In a time of rampant misinformation, we need information we can trust and evidence-based public health precautions that we can enact right now,” according to the Mailman School of Public Health at Columbia University.

The school reached out to cast members and asked them to make the public service announcements to encourage people to follow simple health precautions.

The PSAs focus on key tactics to slow the spread of COVID-19, including social distancing, proper hand washing, and combating misinformation—all aimed at helping us protect ourselves and our communities during this pandemic.

“So a few years ago, a bunch of us did this movie call ‘Contagion,’ which we’ve noticed is creeping its way back up the charts on iTunes, for obvious reasons, given what we all are living through now,” Damon said, kicking off the PSAs.

The actor assures that everything was vetted by health experts and scientists. Damon explained the importance of social distancing.

In the Steven Soderbergh-directed film, Damon’s character represented “everyman” who had a natural immunity to the virus.

“That was a movie; this is real life. I have no reason to believe I’m immune to the COVID-19 and neither do you, no matter how young you are. This is a new virus.”

Nobody knows how soon it will be until we defeat the virus, but there are ways to make that day come sooner, he says.

“Social distancing… it means staying six feet away from another person. It means not gathering in groups and staying home, or sheltering in place,” he explains.

“Every time you pass this virus to someone else, you are actually giving it to three or four other people, as well,” he notes.

These spots were all shot by the actors themselves— with no crew. Winslet’s was shot by her husband.

They were written by screenwriter Scott Z, Burns under the guidance of the same experts who worked on the film– Dr. Larry Brilliant, Mark Smolinski, Laurie Garrett and Dr. W. Ian Lipkin of the Columbia University Mailman School.