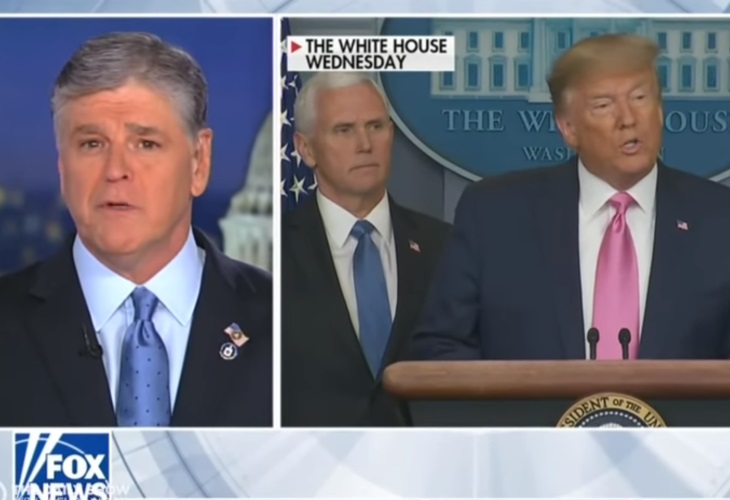 Donald Trump and right-wing Fox News talking heads went absurdly overboard dismissing the danger of COVID-19, delaying the nation’s response to the pandemic for weeks and putting the lives of countless Americans at risk. Now you can watch it all in a video compilation.

Their comments were clearly motivated–and likely coordinated–to prop up the president’s misstatements and to attack politically what Hannity frequently refers to as the “media mob” and Dobbs labels the “national leftwing media.”

The Daily Show’s Trevor Noah collected the remarks in a compilation video. It’s a devastating indictment of just how far Fox News commentators went to play down the virus and sow false complacency.

In what can only be described as a deliberate misinformation campaign, Hannity led off the video with his now infamous “Chicken Little” commentary:

“Tonight, I can absolutely report the sky is absolutely falling; we are all doomed; the end is near; the Apocalypse is imminent and you’re all going to die. Or, at least that’s what the media mob would like you to think,” he sneered.

The video is titled “Heroes of the Pandumic,” a “Daily Show” play on the absurdity and stupidity of their comments.

On his Feb. 24 radio show, Limbaugh said: “The coronavirus is the common cold, folks,” lampooning the idea that it was a pandemic.

That’s the same day, Trump declared in a Tweet: “The Coronavirus is very much under control in the USA… Stock Market starting to look very good to me!”

The president also said the nation was “close to a vaccine,” a remark that had to be walked back by the administration’s own health advisers.

“The far more deadly, the far more lethal threat right now is not the coronavirus, it’s the ordinary old flu,” said Rivera on Feb. 28. “People are dying right now… nobody has died yet from the coronavirus in the United States as far as we know.”

“This is one of those cases, where the more I learn about the coronavirus the less concerned I am. There’s a lot of hyperbole…”

On Mar. 8, Dobbs, a business commentator who should know better, directly attacked the “national left-wing media.” He accused it of “playing up fears of the coronavirus.”

But only the day before, Mar. 7, US recorded 19 deaths; New York cases increased to 89, and the state declared emergency.

On Mar. 8, Trump assured the public: “We have a perfectly coordinated and fine-tuned plan at the White House for our attack on Coronavirus.”

But by then, the U.S. recorded 550 confirmed cases. The Grand Princess, in quarantine for days, was finally allowed to docked on Mar. 9 in Oakland, Calif. The UK reported 273 cases and three deaths. More than 110,000 infections in 108 countries were reported around the world. Italy reported 9,172 with 463 deaths. Canada reported first death.

Those numbers look quaint now compared with the virus’s rampage. But Trump and Fox News commentators remained in denial.

Jeanine Pirro was emphatic on her Mar. 7 broadcast. “It’s a virus, like the flu,” she asserted. “All the talk about coronavirus being so much more deadly doesn’t reflect reality.”

Ingraham kept up the Fox News attack on the “left-wing media.”

“The facts are actually pretty reassuring,” she said on Mar. 9. “But you’d never know it watching all this stuff.”

On the same day, Trump doubled-down on his infamous remark that the virus was a “Democratic hoax.”

“The Fake News Media and their partner, the Democrat Party, is doing everything within its semi-considerable power (it used to be greater!) to inflame the Coronavirus situation, far beyond what the facts would warrant,” he protested.

On Mar. 10, Lahren’s commentary was even more absurd. “The sky is falling because we have a few dozen cases of coronavirus on a cruise ship? I am far more concerned with stepping on a used heroin needle than I am in getting the corona virus. But, maybe, that’s just me..”

“The Daily Show” is a late-night comedy show, but this compilation is nothing to laugh at. It’s a horror show. The ending is the absolute kicker. We won’t give it away here.

But one thing is certain, Hannity, Rivera, Lahren, Dobbs, Pirro and Hedsreth should be pulled from the air immediately and sent on hiatus indefinitely, or at least until the crisis is over.