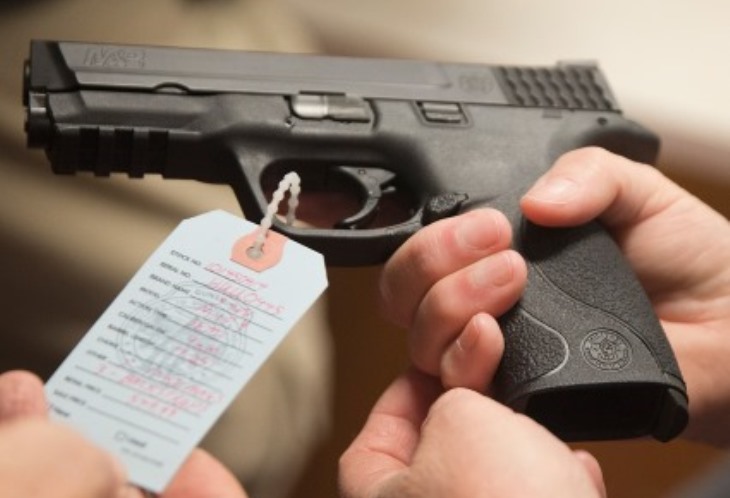 New York State is ready to go to war with the NRA over the closing of gun stores during the COVID-19 pandemic. (Photo: Getty Images)

New York State says it will “aggressively defend” itself against a National Rifle Association (NRA) lawsuit to overturn an order that deemed gun stores “non-essential” businesses, forcing them to close during the COVID-19 pandemic.

The group, which largely represents gun manufacturers, sued the state last week claiming the order violates the Second Amendment to the constitution. The suit follows similar legal challenges in California, according to The New York Times.

“There isn’t a single person who has ever used a gun in self-defense who would consider it nonessential,” the NRA Chief Executive, Wayne LaPierre, said in a statement.

Everyone — including the NRA — must follow the law and all executive orders of New York. We will aggressively defend the state against yet another legal assault by the NRA,” she said.

So far, however, New York state is standing alone, at least in the tri-state area.

Last month (Mar. 22) Gov. Ned Lamont of Connecticut classified gun stores as “essential” businesses in an executive order, allowing them to remain open during the crisis, The Hartford Currant reported.

New York, New Jersey and Massachusetts were the only states in the region that shuttered gun stores.

But New Jersey Gov. Phil Murphy on Mar. 30 reversed his decision and declared that gun stores an essential business.

Murphy was caving to demands from Republican state lawmakers in the face of lawsuits filed by gun rights groups. Murphy was also following new guidance from the federal Department of Homeland Security, which issued a directive in late March, declaring gun dealers to be “critical infrastructure.“

The move came after the NRA and associated gun groups successfully lobbied President Trump to add firearms vendors to the federal government’s list of essential businesses.

Gun sales have surged during the pandemic along with requests for federal background checks.

The FBI conducted 3.7 million background checks last month. That’s the highest total since the national instant check system for buyers was launched in 1998 and 1.1 million higher than the number conducted in March 2019, NBC News reported.

More than 210,000 checks were conducted on March 21 alone, the record for a single day.

The March figure also topped the previous high of 3.3 million set in December 2015, after the Obama administration considered restricting assault weapons after the deadly mass shooting in San Bernardino, Calif.

The pandemic is proving to be a key test for the embattled NRA, which is struggling with legal and financial problems.

Gun control groups also see pandemic, as well as the upcoming election, as an opportunity to gain ground politically, with the White House and Senate control up for grabs.

Meanwhile, the NRA, like President Trump and right-wing media have found themselves on the wrong side of the pandemic. The NRA played down the virus initially calling it an “election ploy.”

Wayne LaPierre Must Go; NRA Must Return to Roots as Boycott Grows

It’s also used the pandemic in media campaigns to attack states that are closing gun stores, including fear tactics.

“What do they expect when they are releasing inmates while closing gun shops during a pandemic,” the group said in a Tweet.

In a video, unearthed by The Times, the group also played off the possibility of widespread pillaging.

“If you aren’t preparing to defend your property when everything goes wrong, you’re really just stockpiling for somebody else,” said a woman in the video who appeared disabled and was holding a gun.

So far, there have been no reports of pillaging or an increase in crime caused by inmates released from jails and prisons. Only non-violent prisoners are being released to lessen the chances of COVID-19 outbreaks among those incarcerated.

“They’re mired in crisis, strapped for cash, and so revert to the old playbook — fearmongering about the collapse of society — in order to raise money,” John Feinblatt, President of Bloomberg group “Everytown for Gun Safety, told The Times.

The NRA has been rocked by scandal over the past two years. One of the most significant was its close ties to Russian spy Maria Butina, who used her sexuality and obsession with guns to get close to influential conservative politicians and groups, mainly through the gun rights group.

The fetching Russian allegedly wooed top Republicans and NRA officials into a dalliance with Russian oligarchs and the Kremlin’s intelligence apparatus. The relationship may have included a massive influx of cash. The NRA spent $30 million on Trump’s election in 2016.

The Senate Intelligence Committee asked the NRA to turn over records and other documents. The goal is to shed light on its relationship with Russian interests including the details behind a 2015 Kremlin trip by NRA officials, according to The Daily Beast.

The NRA was rocked by protests sparked by the 2018 mass shooting at Marjory Stoneman Douglas High School in Parkland, Fla, Seventeen people were killed and others were wounded by a lone gunman with an assault rifle, the weapon of choice in mass shootings.

Speakers from the school clearly zeroed in on the NRA.

“If we move on, the NRA and those against us will win,” said Delaney Tarr, a Parkland survivor.

“They want us to forget. They want our voices to be silenced. And they want to retreat into the shadows where they can remain unnoticed. They want to be back on top, unquestioned in their corruption, but we cannot and we will not let that happen,” she said.