Trump ‘Miracle Cure’ a Bust, But Progress Being Made on Real Covid-19 Treatments

Keith GirardApril 13, 2020CULTUREPOLITICS
Promising treatments could be on the way for COVID-19, but Trump miracle drug isn't one of them. (Photo: Getty)
Home
CULTURE 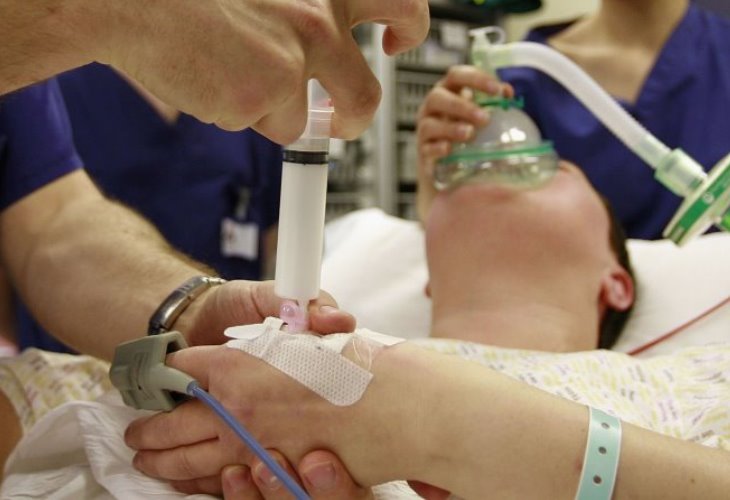 Promising treatments could be on the way for COVID-19, but Trump miracle drug isn’t one of them. (Photo: Getty)

Donald Trump has been relentlessly championing a malaria drug to treat Covid-19, but the drug is quickly falling out of favor with doctors because of its ineffectiveness and side effects.

Fortunately, progress is being made on real treatments for the pandemic. Researchers are closing in on a vaccine or other treatments that will eventually render the virus practically harmless.

Trump, however, has been pushing the drug hydroxychloroquine as a potential “game changer.” Fox News talking heads have joined the chorus touting the drug based on no more than anecdotal evidence.

On March 21, Trump referred to a French study in a tweet, saying that the combination of hydroxychloroquine and azithromycin “have a real chance to be one of the biggest game changers in the history of medicine.”

But now the medical society that published the French research has issued a statement saying they’re reviewing the study again and “a correction to the scientific record may be considered,” according to CNN.

Art Caplan, head of the division of medical ethics at the New York University School of Medicine, called the study “pathetic.”

Even the president’s own infectious disease advisers, Anthony S. Fauci and Deborah Birx, have stopped short of fully endorsing the drug.

Several hospitals in Sweden have stopped administering chloroquine to coronavirus patients following reports the drug was causing adverse side effects.

Side effects are reported to include cramps and the loss of peripheral vision, according to the national paper Expressen.

“There were reports of suspected more serious side effects than we first thought,” Magnus Gisslén, a professor and chief physician at Sahlgrenska University Hospital infection clinic, told The Gothenburg Post.

“We cannot rule out serious side effects, especially from the heart, and it is a hard-dosed drug. In addition, we have no strong evidence that chloroquine has an effect on COVID-19,” he said.

A Brazilian study that saw 81 coronavirus patients given chloroquine was ended early after some of them developed irregular heart rates.

But on Fox News, right-wing talking heads have fallen all over themselves promoting the drug. They have tried to leverage the debate into their usual attack on the media, and unbelievably, medical experts.

Tucker Carlson and Sean Hannity, both Trump sycophants, have been the leading proponents of the drug.

“The drug is showing signs of success, in spite of what the mob and the media is telling you,” Hannity told his audience in early April.

“After hearing all of the stories where hydroxychloroquine is credited with saving lives, it is amazing that the left and the medical establishment is still in total denial about the potential of these decades-old drugs,” she said on her program, according to The Washington Post.

The Food and Drug Administration (FDA) gave emergency approval for doctors to prescribe the drug to coronavirus patients, largely based on the president’s enthusiasm. The drug has yet to be tested and approved through the usual process of clinical trials.

Solely based on Trump’s hype, a stampede has ensued. U.S. hospital orders for chloroquine jumped by 3,000% from March 1 to 17, according to Premier Inc., a group-purchasing organization for hospital supplies. Hydroxychloroquine orders were up 260%, according to The Los Angeles Times.

Trump doesn’t appear to have any financial connection to Hydroxychloroquine maunfacturers, but his motive for pushing the drug has a decided political intent.

Selling the drug as a cure to the virus would provide a justification to lift lock-down restrictions on businesses and gatherings. Political analysts say Trump needs to get the economy going again and declare victory over the virus to save his re-election.

But the danger of restarting the economy too soon can’t be overstated, especially for blue-collar service workers. They would be forced to go back to work, increasing their exposure to the virus, while professional, white-collar workers could still work from home.

“The president is short-circuiting the process with his gut feelings,” Jeffrey Flier, a former dean of Harvard Medical School, told Reuters news service. “We are in an emergency and we need to rely on our government to ensure that all these potential therapies are tested in the most effective and objective way.”

Fortunately, other more effective treatments are under study.

Gilead Sciences Inc. reported that an experimental drug for patients with severe Covid-19 infections showed promise in an early analysis.

The findings published in the New England Journal of Medicine were based on a study of 53 people in the United States, Europe and Canada. All needed respiratory support, with about half receiving mechanical ventilation and four on a heart-lung by-pass machine.

Over 18 days, 68% of the patients who took the drug remdesivir improved, with 17 of the 30 patients on mechanical ventilation being able to get off the breathing device.

Almost half of the patients studied were ultimately discharged, while 13% died. Mortality was highest among those who were on a ventilator, with 18% of them dying.

Despite the results, medical experts have cautioned that the study was too small to be definitive. Gilead has provided the medicine to more than 1,800 patients in separate studies.

In one of the most promising developments, drug maker Johnson & Johnson announced that it had identified a lead COVID-19 vaccine candidate from constructs it has been working on since January.

The company expects to initiate human clinical studies of its lead vaccine candidate at the latest by September 2020 and anticipates the first batches of a COVID-19 vaccine could be available for emergency use authorization in early 2021, a substantially accelerated timeframe in comparison to the typical vaccine development process, the company said.

Johnson & Johnson is also ramping up global manufacturing capacity to assist in the rapid production of a vaccine and will enable the supply of more than one billion doses of a safe and effective vaccine globally.

The company plans to begin production at risk imminently and is committed to bringing an affordable vaccine to the public on a not-for-profit basis for emergency pandemic use, it said in a statement.

In all, 15 companies have agreed to share their proprietary libraries of molecular compounds that already have some degree of safety and activity data following a conference call with the Gates Foundation earlier this month.

The COVID-19 Therapeutics Accelerator, launched by the Gates Foundation, Wellcome, and Mastercard two weeks ago, will quickly screen drug candidates for potential against COVID-19.

Successful hits would move quickly into pre-clinical trials in as little as two months.

Until then, the most effective way to stem the virus is to maintain self-distancing and sheltering in to avoid contact.