Keith GirardApril 22, 2020CULTUREMUSIC
UK Singer M.I.A has been swept up in the debate over vaccines amid the coronavirus pandemic. (Photo:
Home
CULTURE 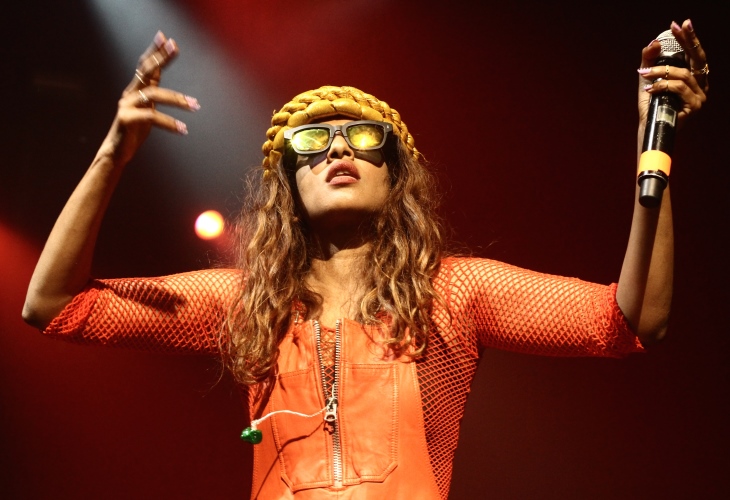 UK Singer M.I.A has been swept up in the debate over vaccines amid the coronavirus pandemic. (Photo: Coup d’Oreille)

M.I.A, the UK singer best known in the United States for flipping the finger during the 2012 Super Bowl halftime show, is causing another uproar over her anti-vaxxer views amid the coronavirus pandemic.

The 44-year-old singer, real name Mathangi Arulpragasam, kicked off the controversy last month when she said she is against immunizations and would “choose death” over being vaccinated against coronavirus.

Now she’s revealing that the British edition of Vogue magazine has bounced her from its August issue over her controversial remarks.

M.I.A shared a screenshot of a WhatsApp message from an unspecified sender that read: “Hey maya – sadly Edward/vogue has decided withdraw the offer for vogue spread in August due to vaccination comments….

“From the editor: “considering our August is an issue where we’re chronicling the struggles of the NHS to cope while a vaccine is tried to be made we don’t feel we can have her involved. It just wouldn’t be right. All of our issues July-September will be supporting the front line health care workers and we need to be respectful of them and all they are doing until a vaccine exists,” she revealed.

In the caption of her post, the ‘Paper Planes’ singer criticized the publication for the “lack of discussion” around the topic of vaccinations, which she labeled “censorship.”

M.I.A’s original comments came as she revealed her 11-year-old son Ikyhyd, who she had with former fiance Benjamin Bronfman, once suffered a bad reaction to a vaccination before starting school.

She tweeted: “If I have to choose the vaccine or chip I’m gonna choose death.

“In America they made me vaccinate my child before the school admission,” she explained. “It was the hardest thing. To not have choice over this as a mother. I never wanna feel that again. He was so sick for 3 weeks then Docs had to pump him with antibiotics to reduce the fever.”

Asked by a follower if she is an anti-vaxxer, she confirmed: “Yeah.”

The singer also suggested the current pandemic was man-made for profit, and insisted people are not “gonna die” from coronavirus and don’t need to “stress the medical systems” if they fall ill.

As of the time of writing, over 2.5 million people have been infected with coronavirus, and almost 180,000 have died as a result of the respiratory illness, worldwide.

“anti vaxer is your term . It didn’t exist before this binary addiction everyone has to separate everything into this and that. Anti this Anti that,” she wrote in a note to the magazine on social media.

“I prefer to not make everything so black and white. I’m sure there’s variety of doctors researchers and labs and counties who understands what’s happening; I’m sure there are good drugs and bad drugs out there.

“Just doing research isn’t an anti anything but pro respecting the process. BTW: How many vaccines are you prepared to have? one a year ? 10 a month ? 2 a year ? Lack of discussion is censorship.”

The British singer’s best known hit, 2007’s “Paper Planes,” was nominated for a Grammy for record of the year. The song also appeared on the soundtrack for the movie “Slumdog Millionaire.”