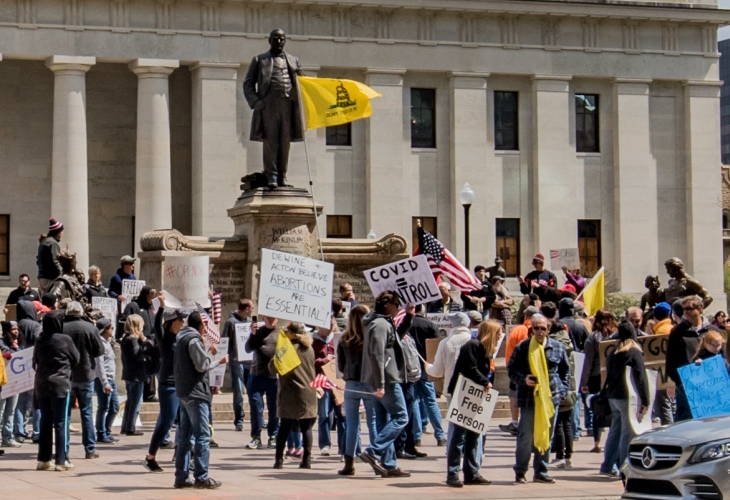 Protesters gather outside the Ohio statehouse to demonstrate against coronavirus restrictions. (Photo by Ɱ)

Donald Trump’s erratic COVID-19 briefings have been slowly eroding his credibility, but his bizarre “LIBERATE” tweets in support of angry mobs protesting his own policies have pushed his approval ratings to a new low in the latest polls.

The tweets, more than anything, appear to have been the tipping point for many Americans, who have been bombarded daily by Trump lies, distortions, misstatements and contradictions.

The president is trailing Democratic rival Joe Biden by eight percentage points, 47 percent to 39 percent, according to a new Reuters/Ipsos poll, which is considered a credible reflection of voter sentiment.

Just 44 percent of respondents said they approved of the president’s handling of the coronavirus outbreak, an eight-point drop over the past week and 13-point plunge since last month, according to the same poll.

Trump has always disputed polls he dislikes as “fake news.” Rasmussen, a pollster that leans conservative, is one he has consistently praised. Yet its findings are similar.

Trump’s approval slid nine points to 43 percent in its latest poll, while his disapproval rating jumped nine points to 56 percent–an 18-point swing against the president in about six weeks, according to Marketwatch.

During a crisis, Americans typically rally around the flag and the president.

But the COVID-19 pandemic has exacted a far heavier toll.

To date, 835,712 cases have been confirmed in the United States and more than 46,000 people have died. The number of cases and deaths appear to be abating thanks to preventive steps and expanded testing and medical treatment.

For the past month, much of the nation has been under orders to social-distance and stay in their homes as the health system struggled to get ahead of the curve of COVID-19 infections and deaths.

The lockdown order, which also applies to all non-essential businesses, has sent unemployment claims soaring and the economy into a death spiral.

The nation is being pushed toward a recession rivaled only by the 1930s’ Great Depression, undercutting Trump’s signature re-election issue–the economy.

More than 16 million Americans are out of work, and all stock market gains during his presidency have been wiped out. Oil prices are near zero on collapsing demand.

As such, Trump has been anxious to reopen the economy, but has been stymied by the advice of medical experts.

This past week, a series of small, but rowdy anti-lockdown protests tried to force the issue in such states as Michigan, Wisconsin, Virginia and Texas.

The missive, referring solely to states with Democratic governors, flew in the face of his own medical experts on his COVID-19 task force, which has produced a three-phase plan to reopen the economy.

As it turns out, the protesters included elements of white nationalists groups, conspiracy theorists, anti-vaccination extremists, anti-government militias, members of a neo-fascist street gang and other extremists, according to a HuffPost analysis.

Like Trump’s rallies, the protesters are almost uniformly white. Many in the crowd wore Trump’s signature red MAGA hats and waved Trump 2020, American and Confederate flags.

The HuffPost analysis found that some of the rallies were organized by extremist right-wing, neo-Nazi and self-described militia groups.

Trump has faced withering criticism from health care workers, hospital administrators and local elected officials. They accuse the administration of failing to organize a national response to the virus and marshal the resources to fight it.

Instead, Trump has been accused of focusing on his re-election and his public relations problems.

On top of Trump’s poor poll numbers, the latest polls also show more than 80 percent of those surveyed support the lockdown, social-distancing and other steps necessary to curb the virus.