Keith GirardApril 24, 2020CELEBRITIES
It was a hot day in more ways than one. Bella Thorne gives it up in a hot social media dance. (Photo: ScreenCap/Instagram)
Home
CELEBRITIES 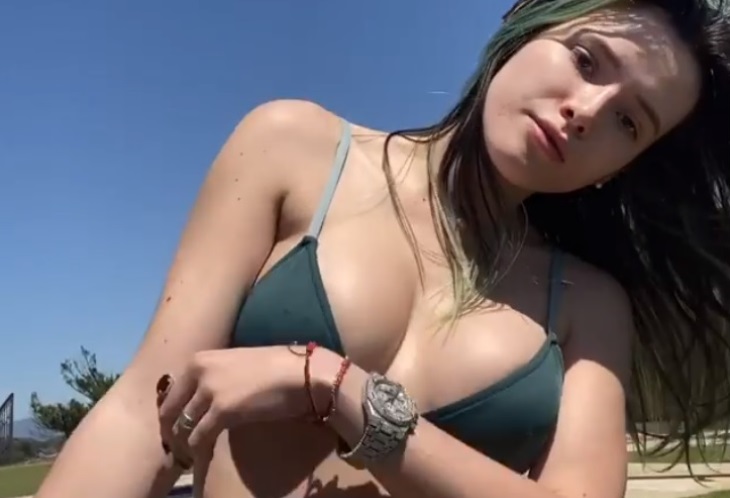 It was a hot day in more ways than one. Bella Thorne gives it up in a hot bikini dance. (Photo: ScreenCap/Instagram)

Thorne, 22, is obviously comfortable with her sexuality, and doesn’t mind doing her part to break up the boredom of being locked in.

She celebrated Earth Day, with, you guessed it, a series of hot bikini photos.

Bella scored a breakout role as CeCe Jones on the Disney Channel series “Shake It Up.” She got the part in 2010 when she was just 13 years old. The show ended three years later.

Thorne wasted no time shaking it up once she turned 18. Two months after her birthday, she posed for provocative photos GQ Mexico that set her on a path to become a Hollywood goddess.

Bella Thorne Lets It All Grow Out: Hot Trend Started by (Who Else?) Madonna

She was 16 going on 25 when the starlet showed off endless legs in a super-short skirt and flashed a sexy shoulder in a ripped tee at the “Teenage Mutant Ninja Turtles” premiere in Hollywood.

Some critics claim Bella was trying a little too hard to sex up her image, but she’s far from the first Disney teen star to make the transition to more mature roles with a splash.

Fortunately, Bella, hasn’t changed her strips. She’s hot and only getting hotter. Check out her video below and settle in for a long lockdown. Bella posted on Twitter and Instagram.