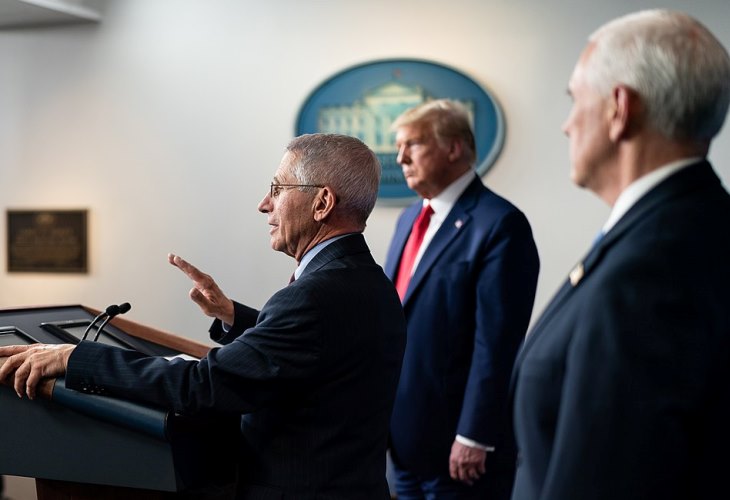 Donald Trump, desperate to shift blame for the COVID-19 pandemic, has claimed for weeks it was created in a Wuhan, China lab, but his top health advisor shot down the assertion in an eye-opening interview.

Anthony Fauci, head of the National Institute of Allergy and Infectious Disease, definitively rejected Trump’s claims about the origin of the virus responsible for 70,000 U.S. deaths and more than 1 million infections.

“If you look at the evolution of the virus in bats and what’s out there now, [the scientific evidence] is very, very strongly leaning toward this could not have been artificially or deliberately manipulated,” he told the National Geographic.

“Everything about the step-wise evolution over time strongly indicates that [this virus] evolved in nature and then jumped species,” he explained.

Fauci has also contradicted the president on the dangers of reopening the economy before adequate testing is available to isolate those infected, and predicted far more deaths in the coming weeks.

Trump, in a fit of pique, refused to let Fauci testify before a House committee. But today (May 5) relented and said he could appear before a Senate committee.

“The House is a setup. The House is a bunch of Trump haters. They put every Trump hater on the committee. The same old stuff,” he told reporters outside the White House, according government and politics website Politico.

In what has to be an embarrassment for an internationally respected infectious disease expert, Fauci has been forced to dance around Trump’s often wildly inaccurate statements about the virus, potential cures and timetables to restart the economy.

But the interview contained some of his most candid comments yet that left Trump’s repeated pronouncements twisting slowly in the wind.

The coronavirus strain was created not as a result of a laboratory accident, but rather in a Chinese “wet” market, two Western officials familiar with the intelligence assessment told CNN.

“It is highly likely it was naturally occurring and that the human infection was from natural human and animal interaction,” the officials said.

Trump asked U.S. intelligence agencies to investigate the virus’s origins and what amounts to a right-wing conspiracy theory that it was created in a Chinese lab.

Despite the lack of evidence, Trump claims to have seen intelligence reports supporting his claim.
He even went so far as to say he had a “high degree of confidence” in his assessment. Trump claimed he was no authorized to reveal his source.

Secretary of State Mike Pompeo has backed him up in TV interviews. But he also failed to produced any evidence.

“Look, the best experts so far seem to think it was man-made. I have no reason to disbelieve that at this point,” Pompeo told CNN.

But even the U.S. Director of National Intelligence has directly contradicted that claim.

“The Intelligence Community also concurs with the wide scientific consensus that the COVID-19 virus was not man-made or genetically modified,” he said.

The president has repeatedly fired or demoted officials who contradict his political narrative or point out shortcomings in the administration’s pandemic response.

He was the intelligence community inspector general who brought to Congress a whistleblower’s complaint that Trump had illegally withheld military aid to Ukraine as part of a smear campaign against Democratic rival Joe Biden.

Trump was impeached for his actions, but acquitted in a trial by the Republican-majority Senate.

Crozier had reported in a memo, leaked to the media, about a burgeoning coronavirus infection on board the ship. Modly was reportedly acting under Trump’s orders.

Modly was forced to resign a few days later after he flew to Guam to address the crew and strongly disparaged Crozier. The Navy is now investigating the matter.

In another late night firing this month, Trump moved to sack the Department of Health and Human Services’s acting inspector general after she released a report on the shortages in testing and personal protective gear at hospitals.

The White House nominated Jason Weida, an assistant U.S. Attorney in Boston, to become the permanent inspector general, replacing Christi A. Grimm, the deputy inspector general who has run the office since January.

“Why didn’t the I.G., who spent 8 years with the Obama Administration (Did she Report on the failed H1N1 Swine Flu debacle where 17,000 people died?), want to talk to the Admirals, Generals, V.P. & others in charge, before doing her report,” Trump ranted on Twitter.

Grimm is a career government investigator and auditor who joined the inspector general’s office in 1999 during the Clinton administration. She was not a political appointee, according to The Washington Post.

“We all know the President hasn’t told people the truth about this virus or his Administration’s response, and late last night, he moved to silence an independent government official who did,” she said in a statement.

“The President cannot be above oversight, no matter how he denies, attacks, and fights against it.”