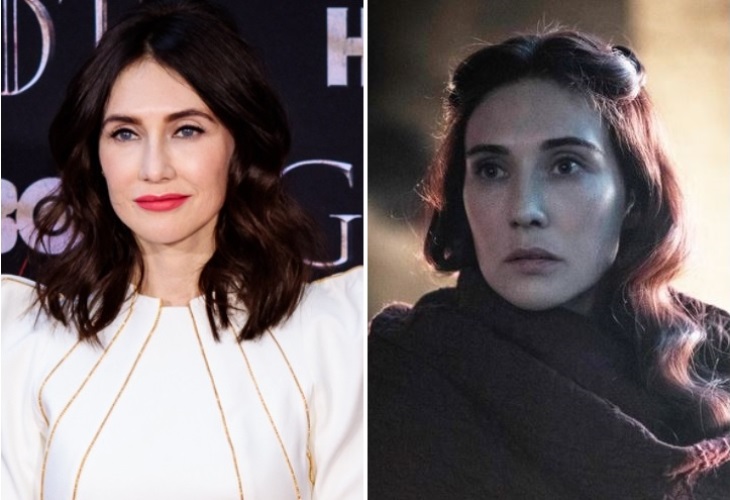 Carice van Houten, the red witch Melisandre on HBO’s hit series “Game of Thrones,” is casting an evil eye at fans for being “ungrateful.” They thought the final season of the show sucked. Who didn’t?

The 43-year-old Dutch-born actress believes the show was a victim of its own success.

Through seven of its eight seasons, the fantasy drama series set the bar so high, it only stands to reason the final season was anti-climatic.

It’s a mark of just “how good” the program was, she insists.

“The fact that some people were so disappointed is because everything before that was so good,” she told Insider.

“So it feels a bit ungrateful. You’ve had such great times and then yeah, you’re going to be disappointed because it’s not going to go exactly how you anticipated,” she explained.

“Of course, you’re going to have all sorts of criticisms and I just thought it was a sign of how good the show was.”

Some viewers thought the final season was so shitty they even organised a petition calling for a remake.

“Knowing the writers and knowing how fuckiing great they are, they don’t deserve that,” she said.

“I think they are probably cool enough to deal with that but still, they are human beings, they are trying to make a good product.”

The actress loved the “randomness and clumsiness” of Bran Stark (Isaac Hempstead Wright) being chosen as king at the end of the series. She thinks it was a fitting callback to the early episodes of the show, in which Robert Baratheon (Mark Addy) was on the throne.

“That’s why I loved the first season, the guy who actually was king didn’t want to be king, so we already got a lesson in the beginning, ‘Why are you striving for that sort of power when, obviously, it doesn’t make you happy?”

Random and clumsy were the least of it.

You may recall, it was only a year ago today when the season finale aired and many fans were left deflated by Jon’s murder of Daenerys after learning they were brother and sister.

Weren’t you just hoping the incestuous couple would rule the Seven Kingdoms, just like brother and sister Cersei and Jaime?

What cruel symmetry, fitting for a show based on a brutish struggle for power. But no.

Jon is banished to the Wall at Castle Black, taking the Wildlings with him. Daenerys is carried off by her dragon, Drogon, after it melts the throne.

Bran Stark is proclaimed king, and becomes known as Bran the Broken. He grants Sansa’s request for an independent kingdom in the North and appoints Tyrion as his Hand.

Podrick is knighted. Arya sets sail to explore west of Westeros. Jon rejoins Tormund and Ghost at Castle Black, leading the Wildlings north of the Wall.

Probably the most disappointing was the way Daenerys turned from a compassionate ruler to a blood thirsty avenger.

She destroys the Iron Fleet and most of the city’s defenses, atop Drogon, clearing the way for her army to flood the city.

The city surrenders, but Daenerys burns soldiers and civilians against everything she stood for throughout the series.

Cersei and Jaime reunite only to be killed as they attempt to escape the Red Keep when the roof falls in on them. Really?

Seems like they had a lot more coming to them, given the way they reeked havoc during the seven previous seasons.

It was the lowest rated season of the show.

The general beef among critics was the way the women of Westeros, especially Daenerys, were sacrificed to bring the show to a “slap dash” ending.

Critic Lucy Mangan of The Guardian seemed to capture the overall sentiment. She called the final season “rushed business. “It has wasted opportunities, squandered goodwill and failed to do justice to its characters or its actors.”

So, yeah, fans had a right to feel pissed. Let us know you thoughts.