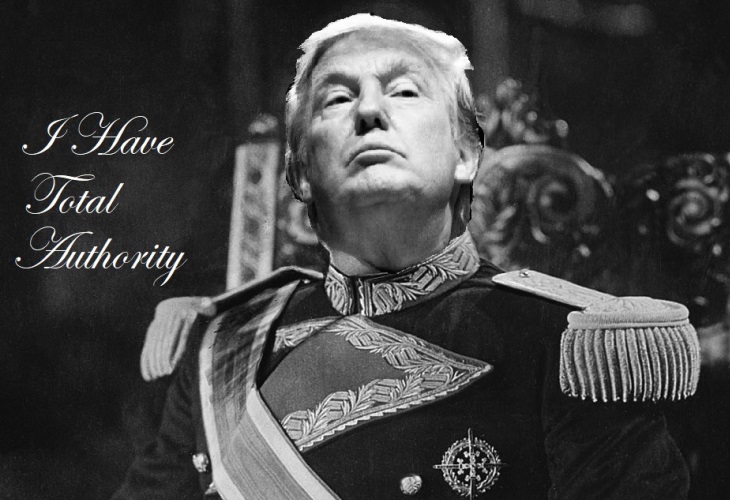 Donald Trump’s presidency is a cacophony of lies. (Illustration NYI)

Donald Trump’s presidency began on a low point and has been sinking deeper ever since, freighted by lies, half-baked policy decisions and gross incompetence. Yet in his own eyes, he’s the greatest president ever.

Like Nicholas II, the last Czar of Russia, Trump has been living in a bubble of his own making, clearly reinforced by a legion of sycophants and right-wing media.

His falsehoods in office number in the thousands, all of which have spun a fantasy world of presidential grandeur that began the day of his election.

He claimed to have a mandate to “Make America Great Again.” He didn’t.

He won the Electoral College by a scant 0.01 percent, or 77,000 votes, spread across three states. But he lost the election by almost 3 million votes.

He claimed his inaugural crowd was the largest in history when it was not even close. Far more people turned out for Barack Obama’s two terms.

Even his greatest singular achievement, reviving the economy, is rooted in a false narrative.

He inherited a nine-year economic expansion that began in the Obama administration following the 2008 financial collapse.

Trump refuses to see he was elected by the narrowest of margins, which should have been a clear signal he needed to govern by consensus to win over the millions of voters who rejected him.

Instead, he’s done just the opposite. He’s governed with arrogance, certitude, divisiveness and self-indulgence.

He labored under the mistaken belief that the majority of the nation shares his views. Instead his base is narrow and overshadowed by hard-right evangelicals, fringe white supremacists and neo-Nazi extremists.

At no time during his presidency has his popularity risen above 50 percent, while his political support has consistently hovered around 40 percent to 45 percent in poll after poll.

His inept response to the COVID-19 pandemic has weighed even more on his administration.

It showcased his incompetence and, at times, incoherence, causing tens of thousands of needless deaths through delays and mismanagement.

He epically underplayed the danger of the virus early on and then undercut his own health experts while failing to organize a coordinated national response.

Instead he foisted one hair-brained scheme after another to minimize the virus, falsely promise quick fixes and misrepresent efforts to find a cure.

He promoted everything from hydroxychloroquine, which proved ineffective and potentially fatal in some cases– to suggesting injecting bleach and inserting UV light probes into body cavities.

If anything, his floundering laid bare the transparency of his agenda. It has been strongly, and solely, focused on his re-election at all costs.

To advance his goal, he stampeded Republican governors into opening state economies against the advice of health experts.

The upshot was a spike in COVID-19 cases in states like Texas, Florida, Alabama and New Mexico. Cases in lockdown hots spots like New York and New Jersey are down significantly.

He declared earlier this month that he had the authority to reopen churches as “essential services,” but that power rests solely with the states.

Packed houses of worship are considered “superspreaders” of COVID-19. Nearly three dozen pastors have died after defying shutdown orders and holding services. Dozens of worshipers have been infected.

Like so many of his half-cocked pronouncements, an administration official was forced to walked back the president’s comments the next day.

The death May 25 of George Floyd, an African-American, at the hands of a white Minneapolis police officer provided another national flash point.

Floyd died after the officer pinned him down by his neck for almost nine minutes sparked national outrage and protests in more than 140 cities.

Officer Derek Chauvin was arrested Friday and charged with third-degree murder and manslaughter. He and three other officers, who did nothing to intervene, were fired.

The situation called for the President to quell tempers and bring the nation together to start the healing process.

Instead Trump responded with viciousness and divisiveness that showed the true shallowness of his character.

On Twitter, Trump has been advocating for a violent crackdown. He has even threatened to call out elite, regular Army troops to confront protesters, even though, again, he has no legal authority to do so.

Police and National Guard troops in several cities have taken their cue from the President and used force in some cases to break up protests.

As the protests have continued, Trump has doubled down on his call for extreme police action. Today (June 1), he urged an even tougher crackdown.

Trump’s inflammatory rhetoric has included calls for protesters to be shot; his disparagement of the media has egged on police to attack reporters.

Trump clearly has no clue the protesters are everyday citizens outraged by systemic police brutality and police racism.

That’s the talk of authoritarian dictators. In the United States, civil disobedience is ingrained in the First Amendment of the Constitution.

Citizens have the explicit right to assembly peaceably to petition the government. For the most part, that’s what most protesters did.

The fact that acts of violence and looting have taken place is undeniable. But Trump and his minions have tried to spin them politically.

Attorney General William Barr, aided and abetted Trump’s demonization of protesters by blaming the violence and looting on the so-called “Antifa,” and “extreme leftists.”

Barr offered no evidence to support that assertion, but it played neatly into Trump’s political narrative.

To the contrary, loosely organized hard-right “Boogaloo” provocateurs, known as “boogaloo bois” have been spotted mingling with protesters

“They want to co-opt them in order to start their war. They see themselves as being on the side of protesters and that the protesters themselves are useful in causing anarchy,” said J.J. MacNab, a fellow at George Washington University’s Program on Extremism.

She also sees signs that “Three Percenters,” a right-wing militia movement appear to be mixing with protesters.

At least four members of the far-right Proud Boys group were spotted on the periphery of a protest Saturday night in Raleigh, North Carolina, according to Megan Squire, an Elon University computer science professor who specializes in extremism.

On a telephone call today (June. 1) the president continued to taunt local officials over their restrained response.

He said Minnesota had become a “laughingstock all over the world,” and specifically criticized the response in Philadelphia, Los Angeles and New York City.

He said the arrival of the National Guard in Minneapolis was “domination” and “a beautiful thing to watch.”

At one point in the hour-long call, Trump told the governors they should aggressively prosecute protesters and pursue long prison terms for any crimes committed.

“You have to arrest people and you have to put them in jail for 10 years,” he said. “And you’ll never see this stuff again.”

Democratic Gov. J.B. Pritzker of Illinois was one of the few elected officials who challenged the president.

“I’ve been extraordinarily concerned about the rhetoric that’s been used by you. It’s been inflammatory and it’s not OK for that officer to choke George Floyd to death,” he said.

“We have to call for calm. We have to have police reform.”

After the call, Democratic Gov. Gretchen Whitmer of Michigan released a statement criticizing the president for “viciously” attacking the governors.

“The president’s dangerous comments should be gravely concerning to all Americans, because they send a clear signal that this administration is determined to sow the seeds of hatred and division,” she said.

“We must reject this way of thinking. This is a moment that calls for empathy, humanity and unity.”

Nicholas II’s failure to address legitimate social grievances and widespread corruption led to a violent crackdown that spawned extremism, mass protests and his own downfall.

This protest will only end on Nov. 2 when the nation elects a new president.