Keith GirardJune 6, 2020ENTERTAINMENT
Martin Gugino is approached by an officer moments before he was shoved to the ground. (Photo: ScreenCap)
Home
ENTERTAINMENT 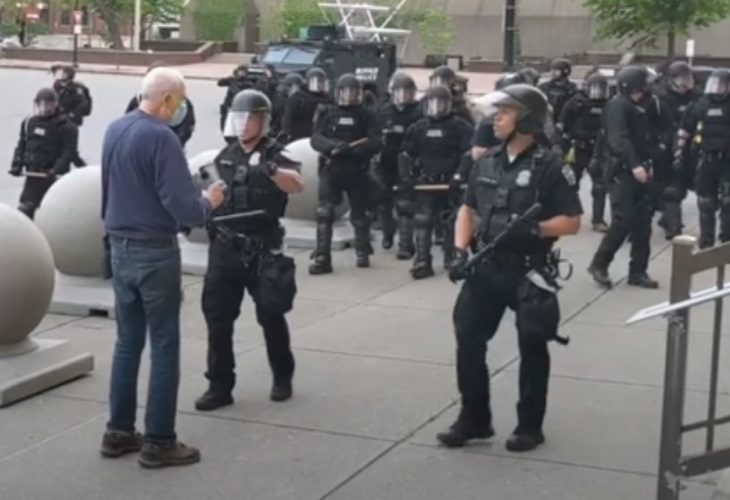 Martin Gugino is approached by an officer moments before he was shoved to the ground. (Photo: ScreenCap)

Martin Gugino, who was shoved to the ground and seriously injured by Buffalo police, is a well-known local peace activist, and member of a group similar to one that former President Jimmy Carter has made famous.

But Buffalo Mayor Byron Brown today (June 6) branded Gugino, 75, an “agitator” who was allegedly trying to incite violence among protesters.

UPDATE: Buffalo, New York police officers Aaron Torglaski and Robert McCabe were charged with second-degree assault for shoving 75-year-old Martin Gugino to the ground during a protest. Both have pleaded not guilty.

The description hardly jived with video of the incident that showed Gugino trying to speak with officers before he was shoved backward and fell to the pavement, striking his head.

Brown’s remarks during a news conference have been widely viewed as an attempt to justify the incident.

The mayor, who is African-American, called Gugino a “key and major instigator” of people who’d been looting and vandalizing the city.

“I don’t want to jump ahead of the investigation. It is very important for officers to know they are getting due process,” he said, according to local WBEN Radio.

The incident occurred after a city-imposed curfew and police were clearing the scene “for the safety of protesters,” Brown claimed.

“He was in the area after the curfew. One of the things that happened before was conflict among protesters and there was a danger of fights breaking out, and police felt it was important to clear that scene for the safety of protesters,” said Brown.

Initially, police claimed the activist “tripped” on his own and dismissed the incident.

But the video, taken by a bystander showed Gugino standing all by himself — away from any other protesters — when two officers approached him and shoved him to the ground.

“Why? Why was that necessary? Where was the threat?mIt’s just fundamentally offensive and frightening. How did we get to this place?” he said.

The two officers involved in the incident were suspended without pay pending further investigation.

The suspension prompted all 57 other officers who make up Buffalo’s Emergency Response Team to resign from the unit–but not the police department–in show of support for the officers.

Gugino remains hospitalized in serious but stable condition and his attorney says he is “alert and oriented.”

The peace activist has been involved in a number of other protests over the years and has his own YouTube channel.

The video was one of dozens posted on social media sites from around the country, showing police shoving and beating protesters, using batons, teargas and rubber bullets.

Check out the video below; Warning Graphic!