What the Hell is Wrong With the Police? John Oliver Breaks It Down (Video) 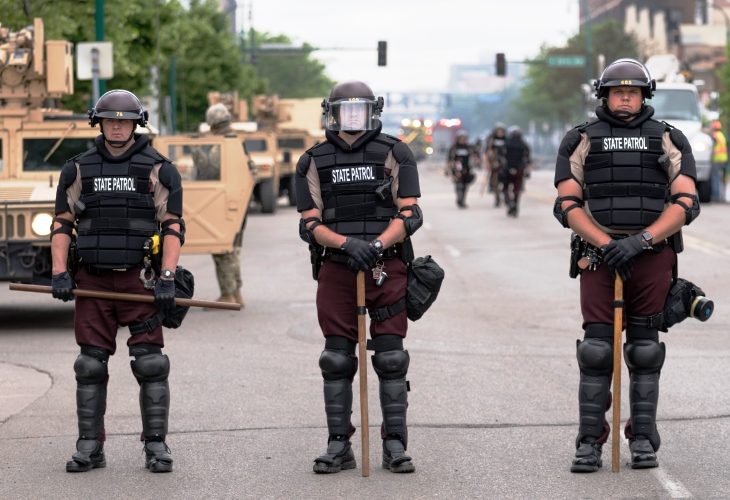 The raw display of excessive force used to clear Lafayette Park of peaceful protesters to make way for Trump and his entourage was shocking in its callous disregard for the rights of citizens and the U.S. Constitution.

But in African-American communities across the country, such police brutality is an all-too-familiar reality of everyday life.

Far from protect and serve, the police have come to represent oppression and subjugation in black communities, with roots that go back to the post-Civil War “Jim Crow” era.

“For much of U.S. history, law enforcement meant enforcing laws that were explicitly designed to subjugate black people,” said “Last Week Tonight’s” John Oliver, in a disturbing examination of the systemic roots of racism in policing.

To frame the issue succinctly, he turned to a video of Kimberly Jones, co-author of “I’m Not Dying with You Tonight.”

“It’s about a structure built on systemic racism that this country created intentionally and now needs to dismantle intentionally and replace with one that takes into account the needs of the people it actually serves.”

The roots of systemic police racism can be traced back to pre-Civil War slave patrols and became an extension of “white power” after the war.

Oliver quotes from Michelle Alexander’s telling book, “The New Jim Crow,” to show exactly how the foundation of modern policing evolved from that time.

She quoted one Alabama plantation owner who summed up the mentality: “We have the power to pass stringent laws to govern Negroes — this is a blessing — for they must be controlled in some way or white people cannot live among them.”

As such, police violence didn’t begin this week, or in this century, Oliver points out. Yet, “it always disproportionately falls on black communities.”

In liberal Minneapolis, where Floyd was brutally killed by four police officers, the rate of police violence against black people was seven times higher than attacks on white people, Oliver noted.

Black Americans were also two-and-a-half times as likely as white Americans to be killed by a Minneapolis police officer.

The 46-year-old man was already handcuffed and yelled out repeatedly he could not breathe until he lost consciousness and died with Chauvin’s knee still on his neck.

The officer was charged with second degree murder and was scheduled to be arraigned today (June 8). Three other officers who were present have been charged as accessories.

“If you are black in America, I can’t even imagine how scared, angry and exhausted you must feel,” Oliver said. “The police are just one part of a larger system of racial inequality.”

The sad irony of the protests is that American has been through it all before, more than once.

While the 1960s gave birth to the civil rights movement, then-President Richard Nixon ran as a “law and order” candidate, and launched the “war on drugs.”

President Ronald Reagan and even President Bill Clinton not only expanded the number of police nationwide but authorized the militarization of local police forces.

At the same time, spending on social services to address systemic problems of poverty in poor communities was slashed.

This had the unintended consequence of requiring police to step in and fill those roles, something they were ill-equipped to handle.

As it turns out, one of the biggest obstacles of police reform are police unions, which have doggedly defended bad cops, who are also protected by limited immunity from lawsuits.

Congress has proposed a bill to end qualified immunity. But the chances of getting it through the Republican controlled Senate are nil, and Trump would almost certainly veto it.

“When faced with accountability they don’t like, unions will often issue the ultimate threat: simply pull back and let crime rise,” he said.

The federal government, of course, has the power to make broad changes through investigations and “consent degrees,” which can be enforced by a federal court.

But the Trump administration has taken just the opposite tack. Trump has billed himself as a “law and order” president and called for an even harsher crackdown on protesters.

To date, the Trump administration has launched only one investigation into allegations of police brutality without any further action.

Republican Sen. Tom Cotton from Arkansas has even called on Trump to unleash regular Army combat troops on citizens with orders to shoot to kill protesters.

As the latest protests demonstrate, the time has come to move beyond incremental steps to hold police accountable.

“The incremental reforms that we’ve tried like the wide use of body cameras and Implicit bias and use of force training are not on their own going to cut it,” Oliver said.

The need for more fundamental reform has been lumped under calls to “defund” police departments, which has been widely misconstrued by Fox News and right-wing media outlets.

“It means moving away from a narrow conception of public safety that relies on policing and punishment and investing in a community’s actual safety — things like stable housing, mental health services and community organizations,” Oliver explains.

“The role of the police can then significantly shrink because they are not responding to the homeless or to mental health calls or arresting children in schools or really any other situation where they best solution is not someone showing up with a gun — that’s the idea of defunding the police.”