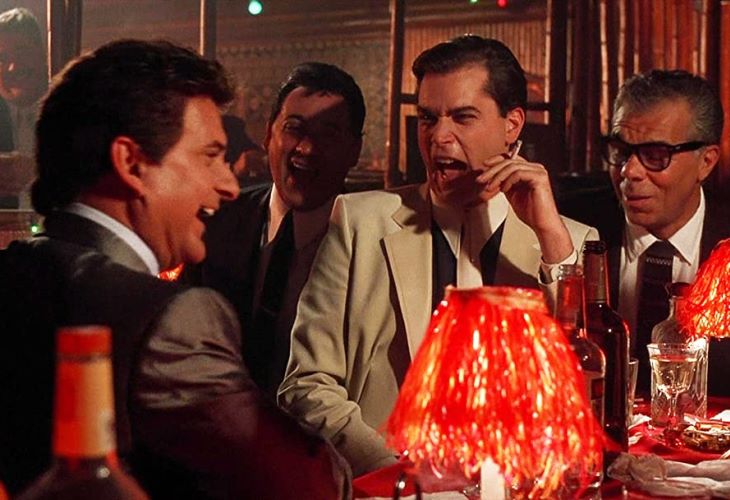 Joe Pesci and Ray Liotta in a scene from the Martin Scorsese film ‘Goodfellas.’ (Photo: ScreenCap)

Billy Batts’ bloody body is in the trunk. They hear a thumping as they drive; it turns out Billy is still alive.

They pull over and Tommy stabs him with his mother’s kitchen knife. Jimmy plugs him with a few shots.

Henry, with his face illuminated by the car’s red lights, looks down at the corpse and in voiceover, says, “As far back as I can remember, I always wanted to be a gangster.”

The credits begin with Tony Bennett’s “Rags to Riches” playing, and for the next two and a half hours, nothing was lost on me.

Movies for me up to that point had always been about entertainment and popcorn. But that changed when I saw “Goodfellas” for the first time at the Smithtown movie theater in 1990.

One of many of Scorsese’s visual tricks in the film is using freeze frame shots to stop the action at critical points in Henry’s life.

The collection of freeze frames can sum up the entire movie.

If Scorsese directed my memories, he surely would have included a scene that froze on me in the Smithtown movie theater, sitting on the edge of the faux-velvet seat with my mouth agape, watching “Goodfellas” 30 years ago.

The movie went into wide release on Sept. 21, 1990 after premiering at the 47th Venice International Film Festival. Scorsese received the Silver Lion award for best director.

The film holds a 96 rating on review sites and was lauded for its hard-hitting script and stylishness.

I was a 16-year-old kid from the suburbs who gleaned all I knew about the Mafia from “The Godfather.” I had yet to appreciate Scorsese’s other works like “Raging Bull” or “Taxi Driver.”

Scorsese’s visceral documentary-style production covering three decades in the mob changed the way I looked at the movies.

Every impeccably framed shot, every voice over and every brilliant use of a song all culminated to create a flawless film while never losing sight of telling the story.

The performances are superb.

Through Liotta’s career-defining role as Hill, we watch a gangster learn, love, earn, hide and transform from a wide-eyed Brooklyn kid into a coked up drug-dealing rat.

He is the audience’s guide through the shadowy underworld of friendship and betrayal. 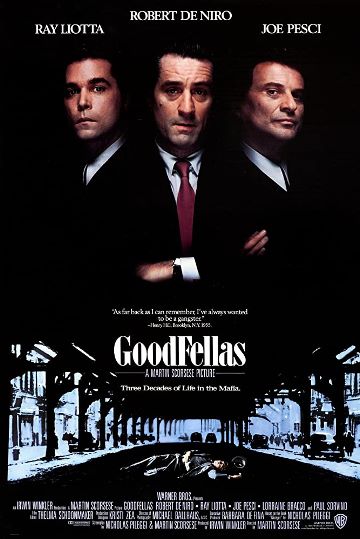 Goodfellas is considered one of the best films of all time. Click the photo to buy the digitally remastered movie.

DeNiro’s charming-turned-calculated and cold Jimmy Conway and Pesci’s hot headed Tommy DeVito are right up there with the Corleone brothers.

DeNiro has become associated with mob characters over his storied career, but he nevertheless is suave and dangerous in this role.

Pesci deservedly won the Oscar for his part. Even though I was a foot taller than him at 16, his portrayal still frightens the hell out of me.

Lorraine Bracco as Henry’s wife Karen upends the norm when she gives an outsider’s perspective on the mob life, and we start to see the world through her eyes via the film’s second narration.

“The Godfather” deals with top of the food chain mobsters negotiating business deals and contract murders in their mansions.

“Goodfellas” deals with working class street-level toughs and their dirty work in Queens and Brooklyn.

“Goodfellas” was shot in real houses, taverns and diners around Queens and Brooklyn,locations that add to the realism.

A decade after the film’s release I was living in Dyker Heights, then a predominantly Italian neighborhood in Brooklyn, and I thought of “Goodfellas” every time I stepped out to get a slice of pizza or a cup of coffee.

Don’t think I didn’t brag about the fact that I lived a few blocks away from the Oriental Manor. The glamorous Bensonhurst catering hall is where Henry and Karen get married.

Or 5 80th Street in Bay Ridge, where Pesci’s character gets whacked.

The soundtrack for “Goodfellas” is an opulent selection of popular music over the course of three decades.

The Doowop songs about love that I recognized from the oldies station I heard in my father’s Cougar are the wallpaper to the film’s rising first half.

Snippets of heavier songs like Cream’s “Sunshine of Your Love” and The Rolling Stones’ “Monkey Man” and “Gimme Shelter” play during the film’s darker half.

Donavan’s “Atlantis” is used during the scene when Pesci and DeNiro brutally beat Billy Batts and the juxtaposition of the magnificent song with the incredible violence is as shocking as it is effective.

And of course, I now can never hear the piano coda of Derek and the Dominoes’ “Layla” without conjuring up an image of a parked pink Cadillac with two fresh cadavers in the front seats.

Goodfellas also resonated so richly with me because I could relate to it so well.

No, I didn’t hang around a Mafia-run cabstand as a kid, but I did work as a busboy at Angelo’s Restaurant for three years during my teens.

The way DeNiro’s affable Jimmy “The Gent” Conway acts in the first part of the film reminded me a lot of Tom the bartender and Angelo’s bar looked like a place where goodfellas would have hung out.

As his faithful disciple, I made sure Tom’s ice bins were always topped off.

Just like Jimmy slipping folded twenties to young Henry, Tom always made sure to stuff some singles in my shirt pocket. He shepherded me into the bar lifestyle and dispensed crucial teachings like a goodfella while he stocked his fridge with bottles of beer.

He schooled me on how to give buybacks, how to tip and when to cut someone off.

I learned the ins and outs of the overs and unders on the football betting slips and that I needed to keep the large bills on top when using my money clip. Regardless of the ethics, I soaked it all up like a bar rag.

Tom brought me to my first bar when I was 17 and before I had my license or a car, he lent me his old Chevy Celebrity.

When I left Angelo’s later that year, not unlike when Jimmy gives Henry his cut from the Air France robbery at JFK, Tom slid his keys down the bar to me for good and I have not forgotten the gesture.

My father was concerned when I told him I got a free car from a bartender.

My mind plays my memories of my days at Angelo’s like Scorsese directed them.

I see a darker haired and leaner version of myself plugging a handful of Tom’s change into the jukebox and savoring the fact that he let me be instrumental to the atmosphere.

I see a close up of a 45-record begin to spin and then hear soft crackling sounds followed by a medley from Bobby Darin and Tony Bennett that swirls like smoke around the room.

A pan shot moves across the row of patrons at the bar, drinking, laughing, smoking, eating spaghetti.

In a sequence mirroring the uninterrupted and iconic tracking shot of Henry and Karen walking through the side door of the Copacabana, through its bowels and finally to a table at the foot of the stage, I see me showing up for my shift at Angelo’s.

I would come through the back door, walk through the kitchen past the white-shirted cooks and dishwasher and pizza ovens, through the foyer and hostess station, down the two steps to the slightly darkened bar and finally to Tom.

“Goodfellas” left an indelible mark on me as a teenager and subsequent viewings only strengthened my opinion that the film is a modern masterpiece.

Check out the trailers below.

Editor’s note: “Goodfellas” is widely regarded as one of the greatest films ever made, particularly in the gangster genre. In 2000, the Library of Congress deemed it “culturally, historically, and aesthetically significant” and added it to the National Film Registry.