Keith GirardJuly 22, 2020CULTUREPOLITICS
Michigan's 3rd Infantry Division during the Civil War. Trump wants to honor the traitors who fought against them.
Home
CULTURE 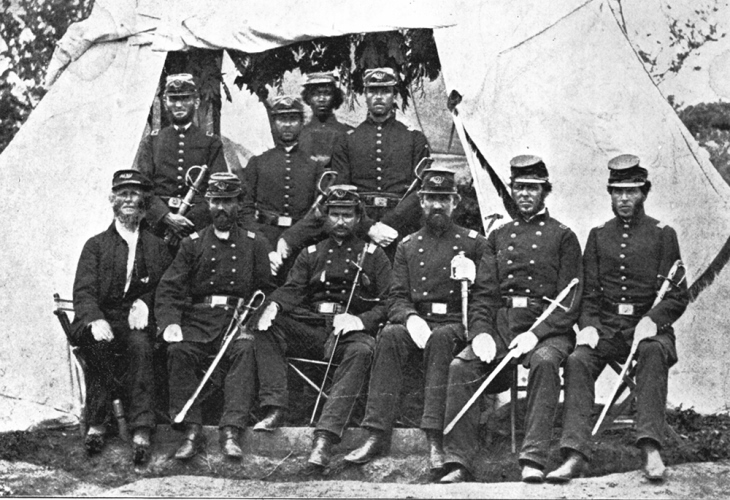 Michigan’s 3rd Infantry Division during the Civil War. Trump wants to honor the traitors who fought against them.

President Donald Trump has declared all out war against the nation’s military in a bid to preserve a Confederate legacy that stood for slavery, enforced Jim Crow laws and was founded in a traitorous revolt against the United States.

Trump made his intentions clear by doubling down on his threat to veto the all-important military appropriation bill that funds our national defense.

Then President Lyndon Johnson, himself a Texan, pushed through the Civil Rights Act and the Voting Rights Act to overturn Jim Crow laws, causing a mass exodus of so-called Dixicrats to the Republican Party.

More than 620,000 Americans on both sides lost their lives during the four years of the Civil War. Confederate General Robert E. Lee surrendered in 1865, marking the end of the conflict.

In an unwritten deal, informally arranged among U.S. Congressmen to settle the 1876 presidential election. federal troops were pulled out of the South.

The move formally ending the Reconstruction Era and ushered in the Jim Crow era, when Southern states reasserted white supremacy through a series of laws disenfranchising African Americans and establishing a doctrine of “separate but equal.”

In 1954, the Supreme Court ruled unanimously in Brown v. Board of Education that “separate but equal” was unconstitutional under the Equal Protection Clause of the Fourteenth Amendment, ushering in the Civil Rights era, which Trump is trying to roll back.

Trump is determined to prevent the renaming of military bases currently honoring Confederate generals who led the revolt against the United States during the Civil War more than 160 years ago.

The administration released a “Statement of Administration Policy” on the National Defense Authorization Act, claiming the House measure is “part of a sustained effort to erase from the history of the Nation those who do not meet an ever-shifting standard of conduct.”

The statement says “senior advisors would recommend” vetoing the measure if it contains the provision once it clears Congress and lands on his desk.

If he does so, it would throw the military into chaos and deny tens of thousands of servicemen of the pay and pay raises.

The statement makes clear Trump’s stance on the issue because it’s formally issued by the administration’s Office of Management and Budget.

His action is designed to counter the movement to remove statues honoring Confederate generals and others that were mostly erected around the turn of the century as a symbol of Jim Crow and White Supremacy.

State and local governments throughout the South, once the bastion of the Confederacy, have embraced the current movement to stop honoring Civil War traitors.

In one of the last relics of the era to fall, the state of Mississippi’s legislature voted to remove the Confederate battle flag from its state flag.

Stock car racing organization NASCAR, which also has deep roots in the South, banned Confederate flags from all its races.

Yet, Trump is persisting with his demand and “totally misjudging the moment,” Stuart Stevens, a Republican political consultant, told The Huffington Post.

“Mississippi took down its Confederate battle flag, and Trump is trying to raise it over the White House,” said Stevens, who worked on the George W. Bush and Mitt Romney campaigns. He is also a seventh-generation Mississippian.

In a Fox News interview last week, Trump explained his support for the Confederate battle flag and Confederate statues.

“When people ― when people proudly have their Confederate flags, they’re not talking about racism,” he claimed.

Trump, however, is facing bi-partisan opposition to his demand.

Both House and Senate versions of the Act remove Confederate names from military bases. The Pentagon has also issued a new policy that effectively bans the display of the Confederate flag throughout the military.

Right now, 10 Army bases mostly in the South, such as Fort Bragg in North Carolina and Fort Benning in Georgia, are named after Confederate leaders.