Matt KindelmannJuly 24, 2020CULTURESPORTS
Babe Ruth was a pitcher for the Boston Red Sox, but switched to the field during the 1918 pandemic. (Photo: Frances P. Burke)
Home
CULTURE 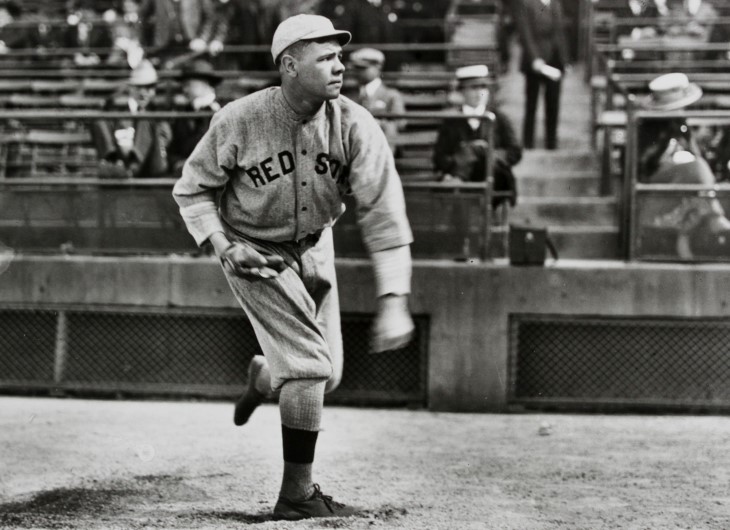 Babe Ruth was a pitcher for the Boston Red Sox, but switched to the field during the 1918 pandemic, launching his career as a slugger. (Photo: Frances P. Burke)

Baseball reminds me of a time when the only thing I worried about was making sure my newspapers were delivered before dinnertime.

As I covered my route, I listened to the announcer’s terse play-by-play on my transistor radio.

I pictured the symmetrical and flawlessly raked dirt of the diamond and the white chalk lines extending for eternity.

I stood and gazed down at the grass stained tips of my sneakers, heard the crowd’s rising voice in my head, and imagined I was in the batter’s box. Baseball was, and still is, a form of escape for me and the nation.

Just as baseball’s spring training was getting underway, the COVID-19 pandemic threatened to upend the national pastime just like much of the nation, erasing a cultural touchstone that has lifted and united us in times of strife.

As the great Yogi Berra once said: “It’s like déjà vu all over again.”

This is not be the first time baseball has attempted to play through a pandemic. The last time was 1918.

The “Spanish flu” pandemic struck and killed an estimated 675,000 Americans and infected 500 million people around the world.

The Spanish flu possessed many similar symptoms to COVID-19 and many of the same words, such as quarantine and social distancing, were on the tip of everyone’s masked tongues a little more than a hundred years ago.

The first case of the flu appeared in the United States in March 1918.

“This wasn’t your ordinary flu,” wrote Johnny Smith, a sports history professor at Georgia Tech and co-author of the new book, “War Fever: Boston, Baseball, and America in the Shadow of the Great War.”

“It was killing guys, their lungs are filling up with this foam, they’re turning purple — it was something doctors had never seen before.”

Baseball began as scheduled in April amid the outbreak, but Secretary of War Newton D. Baker declared baseball players nonessential workers and there was talk of canceling the rest of the season in July 1918.

World War I was still raging in Europe and would continue until that November.

Baseball, it seemed, was a source of normalcy for Americans and the Selective Service Division ultimately issued a “work or fight” order.

All able-bodied players were obligated to enlist to fight in the Great War or go work for the war effort by Labor Day.

Thirty games were cut from the regular season and the World Series was moved up to early September.

On Aug. 27, soldiers returned to Boston and other port cities in America from the trenches in Europe with an even worse form of the influenza.

Despite warnings from city health officials, the Fall Classic was played, and by mid-September, Boston quickly became the epicenter of the outbreak.

The Red Sox beat the Cubs in Game 6, an event many attribute to be one of the preliminary spreaders for the second wave, which killed nearly 5,000 people in Boston alone.

“Three games at Fenway Park, a draft registration drive, a Liberty Loan parade – all of those events and the regular interactions that people had on streetcars and in saloons and so on helped spread the virus,” Smith wrote.

Residents began practicing what we refer to today as “social distancing,” but it was all too little too late.

“The basic treatments that were offered for the Spanish flu were enemas, whiskey and bloodletting,” said Dr. Jeremy Brown of The National Institutes of Health.

“Hospitals as we know them today were quite different. There were no intensive care doctors [and] no antibiotics to treat any secondary infection. So it was a very different time and a very different way of practicing medicine.”

Baseball began back on schedule in spring 1919 without any formal protocol about how to handle the outbreak. But by the summer, the pandemic finally subsided. Those infected either died or developed immunity.

Dozens of players were among those who succumbed to the illness, according to the Baseball Hall of Fame.

Among them were Cy Swain, who slugged 39 home runs in 1913 and Larry Chappell, a big league outfielder for the White Sox, Indians and Boston Braves between 1913 and 1917

When widely known umpire Silk O’Loughlin died in December 1918, the devastating effects of the pandemic hit home for fans and players.

So far no players are known to have died from COVID-19, although more than two dozen have become sick with the virus, according to CBSSports.

If there is one picture that not only sums up baseball amid a pandemic, but also gives us hope, it is a shot snapped at a California Winter League game on Jan. 26, 1919.

It shows a batter, catcher and umpire standing at home plate, all wearing cloth facemasks.

The fans in the wooden bleachers are wearing masks, too. It was required by city ordinance to wear facial coverings at all times while outdoors.

On the first day the rule went into effect, the city made over 60 arrests, according to The Los Angeles Times.

“Even when sliding for bases, the runners managed to keep the cloth over their noses and mouths,” the paper noted.

By the end of the week, the mask order was lifted and normalcy slowly returned. But for that one Sunday afternoon in January 1919, baseball could not deliver any diversion from the health crisis that hit, literally and figuratively, far too close to home.

That picture not only shows baseball’s prominent place in American culture, but it is also an emblem of our human desire to forge on in the face of tragedy.

There was one silver lining to baseball’s experience during the Spanish flu crisis.

Because eleven members of the Red Sox left to join the war effort in 1918 and they were short on hitters, one of the club’s players made the shift from pitcher to slugger and introduced a novel hitting objective called the home run.

One can only wonder if history will repeat itself. That player’s name? Babe Ruth.

In the spring of 1918, Ruth came down with the Spanish flu and was sick enough to be hospitalized. But then a lad of 23, he bounced back quickly.

Fast forward to 2020; after three months of public negotiations about whether it would be possible to salvage the season, baseball, thankfully, has returned.

But the game won’t be quite the same.

Along with the abbreviated season come some new rules. The designated hitter will be used in both the American and National Leagues, much to the chagrin of traditionalists.

If a game cannot continue because of inclement weather, it will be suspended and continued the next day, and extra innings will automatically start with a runner on second base.

There will also be a separate Injured List for players who test positive for, have symptoms of, or have confirmed exposure to COVID-19.

Additionally, there will be no high-fives, fist bumps, or hugs, and no arguing with umpires or the opposing team in close proximity.

Lineup cards will not be exchanged between the managers before the game and pitchers will be allowed to carry a wet rag to avoid licking their fingers for moisture.

Players are strongly discouraged from throwing the ball around the infield after an out and lockers will be at least six feet apart.

The most painful change is the exclusion of fans at the park. Crowd noises will be piped into some stadiums during games.

Despite the changes, I am looking forward to a solid, albeit short, season.

Baseball will only play 60 regular games, but despite its truncation and rule changes, it is a welcome respite during this time of pandemic and political turmoil.