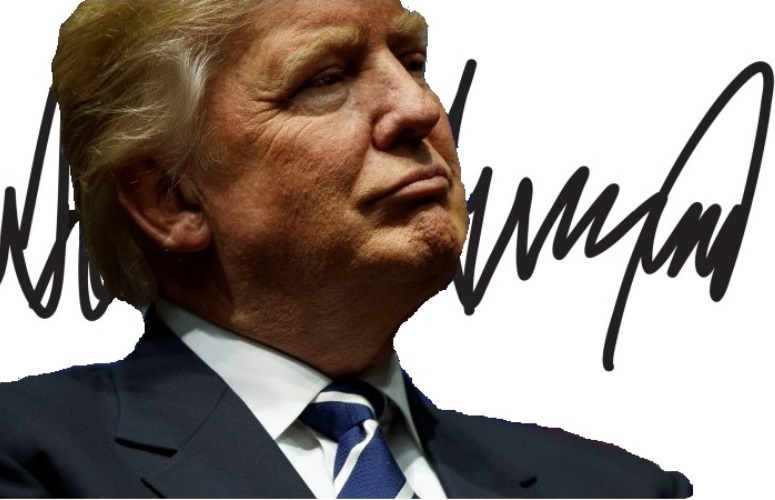 President Trump has signed a blizzard of executive orders this year, which appear destined for his campaign brochures. (Photo MPG Collage)

Donald Trump has issued almost as many executive orders as President Obama during his full two terms in office, even though he sharply criticized his predecessor for trying to govern that way.

In all, Trump has signed 176 orders during the first three and a half years of his four-year term. That compares with 276 orders signed by Obama during his eight-years in office.

What’s more the number of orders has skyrocketed during this election year.

All have lesser weight than executive orders, but some have been no less controversial for overstepping executive authority.

The suit argues the Constitution vests Congress with the power to manage federal lands.

Trump Tax Cuts Expected to Have Only Short-Term Effect on Economy, CBO Says

As he’s sunk deeper in the polls, he’s stepped up the pace of executive order and proclamation signings dramatically, touching on a wide range of subjects that are sure to fluff up his campaign speeches and literature.

Why is @BarackObama constantly issuing executive orders that are major power grabs of authority? This is the latest
http://t.co/4IVBckTE

The four executive actions Trump signed on Saturday are his most political yet.

He pushed ahead with a plan to defer payroll taxes — the source of Social Security and Medicare funds — until Sept. 1 and vowed to eliminate the tax if reelected. Such a move would throw those social service programs into chaos.

“Even Senate Republicans basically said, ‘Let’s forget about that. That’s a really stupid idea.’ And then Trump comes out with it,” said Nobel Prize winning economist Paul Krugman on CNN.

Trump’s orders would also cut emergency unemployment insurance to $400 from $600 a week and force states, which are already suffering, to cover one-quarter of the emergency payments. Krugman called the idea “unworkable.”

“This is something that was thrown together by somebody who has paid no attention to how these things actually work, what it actually takes to get out money to people in need,” he said.

“I don’t know if anyone else has said this, but payroll tax cuts are the hydroxychloroquine of economic policy. They won’t do anything to solve the employment crisis, but will have dangerous side effects. Yet Trump remains obsessed with them as a cure,” he later wrote on Twitter.

I don't know if anyone else has said this, but payroll tax cuts are the hydroxychloroquine of economic policy. They won't do anything to solve the employment crisis, but will have dangerous side effects. Yet Trump remains obsessed with them as a cure 1/

Trump’s very first executive order, signed on his first day in office, Jan. 20, 2017, targeted the Affordable Care Act, better known as Obamacare. It set out interim procedures in anticipation of its repeal, which, of course, never happened.

The order, however, undermined the ACA. The Internal Revenue Service (IRS) announced afterward it would allow tax filers to avoid paying the penalty fee for failing to obtain health insurance, in effect, gaming the system.

Many of the orders deal with hot-button political issues such as immigration, crime and environmental regulations.

Later during his first month in office, Trump issued another order (EO 13771) directing agencies “to repeal two existing regulations for every new regulation, and to do so in such a way that the total cost of regulations does not increase.”

Public Citizen, the Natural Resources Defense Council and the Communications Workers of America quickly filed a lawsuit to block the action.

The suit claimed the order would “endanger public health, safety and the environment.”

The suit was dismissed last December, after a judge ruled that the groups had failed to show sufficient harm to have standing.

Trump’s EO 13772, set his sights on weakening Wall Street regulations spawned by the 2008-2009 financial collapse that led to the Great Recession.

The targeted law, known for short as the Dodd-Frank Act, cracked down on banks and Wall Street to prevent another major financial meltdown.

Trump pledged during the 2016 campaign to repeal and replace the law, which also created the Consumer Financial Protection Bureau.

The president has also signed executive orders in an attempt to validate pet conspiracy theories.

In May 2017, he signed an order (EO 13799) to create Presidential Advisory Commission on Election Integrity, aka, the Voter Fraud Commission, to investigate his repeated claims of widespread election fraud.

Trump had made a series of discredited claims that millions of illegal immigrants had voted in the 2016 election, costing him the popular vote.

The commission turned out to be a farce. Trump disbanded it in Jan. 2018, after the commission was ordered by a court to share its working documents with Democratic members.

In May, this year, Trump fired off an executive order targeting social media companies days after Twitter called two of his tweets “potentially misleading.”

Trump said the move was to “defend free speech from one of the gravest dangers it has faced in American history,” CNN reported.

Sometimes, if the court strikes down one executive order, Trump comes back with another.

It revoked and replaced a January 2017 directive (EO 13769) after the courts prohibited some of its key provisions from being enforced. He also revised it through two presidential proclamations.

The order was still challenged in court by several states. But Trump ultimately prevailed before the U.S. Supreme Court.

Trump is facing legal and constitutional challenges on several of his more controversial orders. Whether he prevails or not remains to be seen.

But one thing is certain, a flurry of executive orders won’t be able to overcome his deep deficit in the polls.