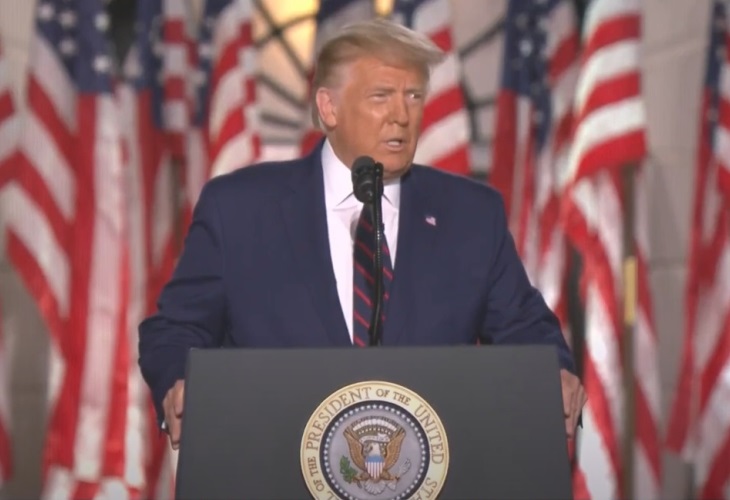 With imagery that could have been lifted from a Leni Riefenstahl documentary, Donald Trump painted an apocalyptic picture of America and vowed to be the “law and order” president in his keynote speech at the Republican National Convention.

As he took the podium last night, the nation was being ravaged by the COVID-19 pandemic, which has been far worse due to his own personal bungling and intransigence.

America leads the world in cases and deaths. Some 180,000 Americans have died and the nation has been plunged in a deep recession.

Trump further polarized the nation in his speech by embracing white supremacist tropes and demonizing those who protest against racial injustice.

Instead of addressing systemic racism, his only answer is to call for a tough crackdown, demanding that local officials send the police, the national guard and even combat troops into the streets.

He was only thwarted from doing the latter by cooler heads at the Pentagon, who saw the implications of deploying combat troops against American citizens.

The demonstrations have been marred by violence and police rightfully should arrest those responsible. But they’ve attacked protesters wholesale instead.

“Your vote will decide whether we protect law-abiding Americans, or whether we give free rein to violent anarchists, agitators and criminals who threaten our citizens,” Trump said.

The supreme irony of the speech was that Trump blamed everyone but himself for the major dislocations that have occurred on his watch as president.

It was characteristic of his attitude throughout his presidency. He is not only not responsible, but is also a victim.

The point was articulated by Nicholas Sandmann, an 18-year-old who was involved in a 2019 confrontation with a Native American activist at the Lincoln Memorial while wearing a #MAGA hat. 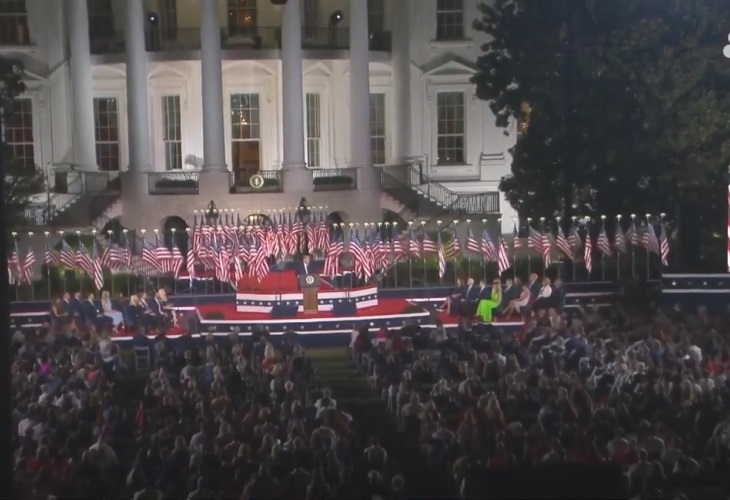 “I know you’ll agree with me when we say that no one in this country has been a victim of unfair media coverage more than President Donald Trump,” Sandmann said.

Trump’s speech was laced with the same falsehoods and misrepresentations that marked the convention and his term in office.

Trump claimed accomplishments he didn’t earn on the pandemic, energy, and veterans and baselessly demonized Black Lives Matter. He falsely accused the group of coordinating violent protests across the country.

He exaggerated his own accomplishments and skated over his failures while his biggest falsehoods involved the Democrats and Biden, according to fact checkers at The New York Times.

Trump also repeated lies or misrepresentations about his support for pre-existing health conditions, construction of the border wall and, most importantly, the economy.

Trump cites the economy as his singular most important accomplishment, and holds a slight lead over Biden on the issue in the eyes of voters. But the claim is another chimera.

“There was steady growth under Barack Obama, but with the election of Trump … absolutely nothing happened,” he asserts.

“The trend continued as before, and nothing in the economic data would lead you to suspect that there had been any change in management.

“The key point about Trump’s economic policy was that mostly he didn’t have one.” he continues.

“Oh, he got us into a trade war with China, which seems to have had some negative effect on manufacturing. And he passed a huge tax cut for corporations, which basically seems to have, well, cut corporate taxes; there was no sign of an acceleration in investment, productivity, or anything else.”

But the most chilling part of Trump’s speech, and the convention as a whole, was the undercurrent of fear it tried to stoke among voters.

Speech after speech focused in cataclysmic terms on an “us” verses “them” society designed to play off racial fears.

Republicans clearly stated where they stand by parading out Mark and Patricia McCloskey, who menaced Black Lives Matter protesters who had the audacity to pass through their upper-income neighborhood. The couple brandished weapons at the unarmed protesters and are now facing criminal prosecution.

Patricia McCloskey played the race card in a desperate bid for white suburban voters, who have abandoned Trump in droves.

“They’re not satisfied with spreading the chaos and violence into our communities. They want to abolish the suburbs altogether by ending single-family home zoning,” she falsely claimed.

She raised the specter of “crime, lawlessness and low-quality apartments into now-thriving suburban neighborhoods.”

“The hard truth is … you won’t be safe in Joe Biden’s America,” said an incredulous Vice President, Mike Pence.

The president’s lawyer, Rudy Giuliani, who is currently under criminal investigation, falsely claimed Black Lives Matter and antifa had hijacked the peaceful protest and turned them into “vicious, brutal riots.”

But an analysis by The Associated Press found no evidence that either group was behind the violence. A number of those arrested were, in fact, affiliated with right-wing groups and acting as provocateurs.

The fear-mongering has had palpable consequences.

A 17-year-old, stoked on Trump’s rhetoric, took it upon himself to pick up an assault rifle and travel across state lines from Illinois to confront protesters in Kenosha, Wisc. He shot three people killing two.

Adding to the outrage, Fox News talking head Tucker Carlson legitimized Rittenhouse’s alleged murder spree. “How shocked are we that 17-year-olds with rifles decided they had to maintain order when no one else would?”

If there is any need to fear from vigilantism and violence, it’s because the President, Carlson and other Fox News talking heads have signaled to armed thugs, masquerading as “militias,” they have free rein to terrorize protesters.

The tone of the convention was equal parts dark, nihilistic and fawning, in an attempt to humanize a president, who has said of 180,000 pandemic deaths, “it is what it is.”

Riefenstahl, the German cinematographer who chronicled the rise of Nazism in stunning propaganda films, would have found the convention’s staging familiar.

She used the same techniques and symbolism to promote Hitler as the savior of Germany in the same way Trump was singularly promoted as America’s savior.

The Republicans offered up no platform or list of issues they plan to pursue, if Trump wins a second term. They’re only asking voters to put their faith in their glorious leader.

In perhaps the ultimate irony of the evening, Trump gave his signature speech on the grounds of the White House. It’s illegal to use federal property for political purposes.

Even worse, he gave the speech in front of a COVID-19 super-spreader cauldron of supporters packed tightly together without social distancing and, for the most part, without masks–putting their health and lives at risk all for visual effect.

Riefenstah would have been proud. Check out his speech below.