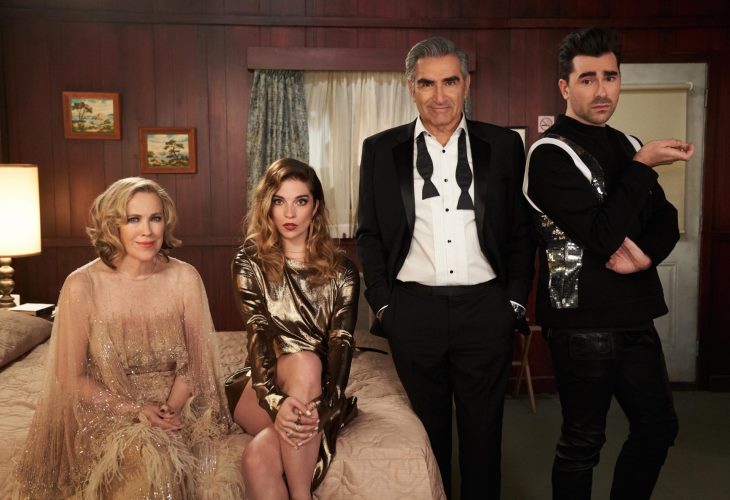 I didn’t know what to expect as I dialed up Sunday’s Emmy awards show.

First off, I guess I have to start watching “Schitt’s Creek.” Honestly, I haven’t watched one episode of the Canadian sitcom, but I am a huge fan of Eugene Levy and Catherine O’Hara.

I didn’t get the concept of Creek when it first aired six years ago and until they were available on Netflix, many people didn’t get it at all.

Still, what an amazing number of Emmy awards to win–seven. And, yes, that set a new record.

Two out my three favorites won: The terrific Billy Crudup in Apple TV’s “The Morning Show” and Julia Garner in Netflix’s “Ozark.”

Dylan McDermott and Jim Parsons, both in Ryan Murphy’s “Hollywood” were simply amazing.

McDermott, after dozens of failed TV series, found his gold in this show. He was just sensational; a career high.

Parsons, was equally as stellar playing a real person no less (Hollywood agent Henry Wilson). To me, they were both robbed.

Crudup, whose been around for years, delivered a searing portrayal of network exec Cory Ellison. Just right on the mark.

Honestly, it was as good a performance as I’ve ever seen and his performance of the Stephen Sondheim song (from Sweeney Todd) “Not While I’m Around” (with Jennifer Anniston, both in character) was one of the big TV highlights of the year.

An Awesome performance by Crudup and Anniston.

Jimmy Kimmel was reasonably on the money, but I admit, I just don’t find him funny.

Kimmel dubbed the Emmy Awards the “Pand-Emmys” as he opened the show in front of a fake audience on Sunday.

The talk show host took to the stage at Los Angeles’ Staples Center in front of delighted star-studded crowd. But when his own face appeared laughing at one of his jokes, he revealed the footage was from previous ceremonies.

The seats inside the venue were filled intermittently with celebrity cutouts – and the real Jason Bateman.

Jimmy joked: “Of course we don’t have an audience. This is the Emmys, not a MAGA rally.”

To kick off the ceremony, Kimmy enlisted his friend Jennifer Aniston to hand out the first award of the evening. But the pair managed to set the stage on fire.

To me, he’s more of an observational comic–like Seinfeld–but his delivery always comes off a tad awkward.

Still, he soldiered on a show that just had too much poorly written material. Jason Bateman in the audience was funny, but the bit went on a bit too long.

It’s a great show, just now being discovered by many. It will go down as one of HBO’s greats, maybe even up there with The Sopranos.

The In-Memoriam segment was nice, with H.E.R. performing Prince’s “Nothing Compares 2 U.”

Chadwick Boseman, Naya Rivera and Regis Philbin were among those remembered.

But, awkwardly, left out was “Saturday Night Live’s” Hal Wilner.

An amazing mistake, but, then, one or two are always left out.

Reading some reviews of the show, the first thing everyone seemed to comment on was the rather amazing technological feat pulled off, and I have to agree.

There were surprisingly few tech errors. Everyone sounded pretty good (except for maybe Mark Ruffalo), but, all in all, it all went surprisingly well.

Hopefully next year, the Emmys will be able to get back on track.

I miss the audience, the interaction and the glamour of pre-pandemic shows. Hopefully, we’ll get back there again soon.

Here is a list of selected winners at the 72nd Primetime Emmy Awards.

Outstanding Lead Actor in a Limited Series or Movie:
Mark Ruffalo – ‘I Know This Much Is True’