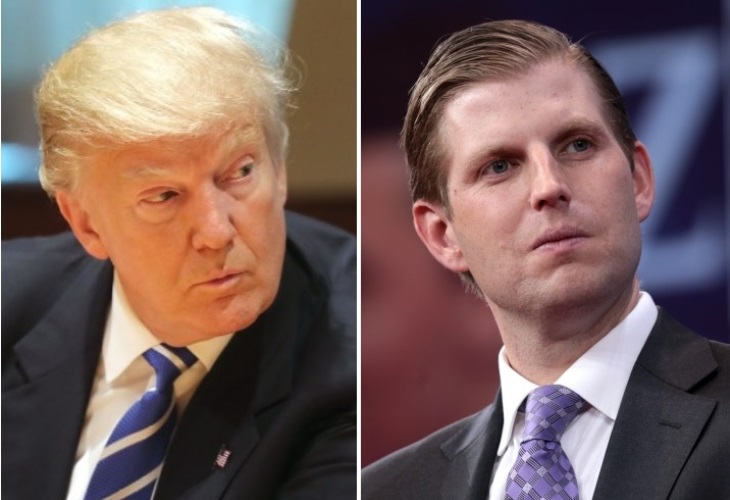 Donald Trump and the Trump Organization are facing investigations on two fronts in New York targeting alleged income tax fraud and other irregularities regarding the company’s real estate holdings.

Prosecutors from Manhattan District Attorney Cyrus Vance Jr.’s office revealed this week in a court filing that Trump and his business could be facing possible bank and insurance fraud charges.

The latest development was revealed in a motion arguing that a federal appeals court should enforce a grand jury subpoena seeking eight years of Trump’s tax returns.

The president has promised to make the returns public ever since 2016, but has yet to do so. He claims they are under audit. The IRS says that’s no reason to withhold the returns.

In a separate investigation, Trump’s son Eric was accused of giving a judge a “false” explanation to cover why he backed out of a July deposition in a civil fraud probe being conducted separately by New York Attorney General Letitia James.

“This assertion is false,” James said in a court filing this week in Manhattan. Trump gave his “categorical refusal to appear” through a July 27 letter from his lawyer, she said.

The state wants Eric to testify on behalf of the Trump organization, where he serves as executive vice president. He has been dodging the subpoena for months, according to the AG’s office.

Eric Trump’s lawyer claimed his client had simply “adjourned the deposition” to get “certain assurances first.”

“If every witness were permitted to delay subpoena compliance for six full months on a claim of personal inconvenience, law enforcement investigations would be irretrievably delayed — which is why no such rule exists,” James said in a statement.

A state judge in Manhattan, Arthur F. Engoron, agreed today (Sept. 23), ruling that Eric Trump had to sit for a deposition no later than Oct. 7. Trump’s arguments that a delay was necessary were “unpersuasive,” the judge ruled.

But the more pressing matter is likely the DA’s investigation.

Trump has appealed the matter all the way to the Supreme Court on the grounds of executive privilege. Earlier this year, the high court ruled the president did no have an “absolute right” to avoid a state subpoena while sitting in office.

But it left the door open for further arguments and remanded the case. A federal judge in Manhattan last month rejected his latest arguments.

Trump has appealed that ruling the U.S. Court of Appeals for the 2nd Circuit and another turn before the Supreme Court appears likely.

In another complication, Supreme Court Justice Ruth Bader Ginsburg died this week, clearing the way for Trump to make another appointment and cement a hard-right 6-3 majority on the court.

All nine justices rejected the claim of absolute immunity, suggesting a new court composition is unlikely to reverse its previous decision.

The federal appeals court is set to hear arguments in this case Sept. 25 before a three-judge panel.

Trump’s lawyers claim the subpoena is “overbroad” and issued “in bad faith.”

But Vance’s team argued that news reports have found evidence that Trump and his company misstated the value of business properties at different times.

Business partners, insurers, potential lenders and tax authorities may have been misled by a scheme to defraud them through falsification of business records, court papers assert.

Trump allegedly “helped his parents dodge taxes” through a sham corporation that hid millions of dollars in gifts and undervalued holdings, according to the filing.

Trump allegedly inflated his assets and omitted debt-laden properties during a 10-year spending spree that began in 2004. He spent $400 million in cash for “five houses, eight golf courses and a winery” despite being billions of dollars in debt.

In another potential legal problem for Trump, Deutsche Bank, Germany’s biggest financial institution and one of Trump’s biggest lenders, is under investigation for money laundering for criminal syndicates and Russian oligarchs.

Trump was able to borrow hundreds of millions of dollars from the bank at a time when no major U.S. lending institution would loan him money in the wake of his casino bankruptcies in New Jersey.

Deutsche Bank’s private banking arm, which caters to clients with assets in an excess of $50 million, extended four large mortgages to the Trump Organization, according to Bloomberg.

Rosemary Vrablic, who had previously worked as Trump’s personal banker at Citigroup and Bank of America before moving to Deutsche bank’s private wealth division in 2006, reportedly negotiated the loans.