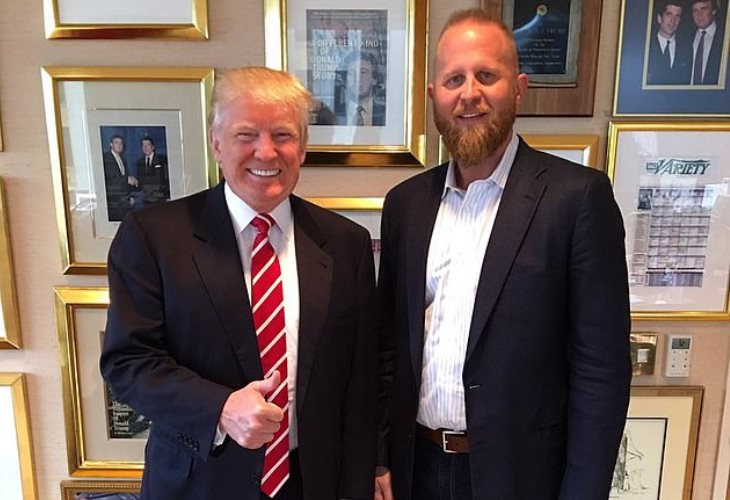 Brad Parscale (right) was a close associate of Donald Trump and headed his 2020 campaign. (Photo: Facebook)

Trump Campaign advisor and former campaign manager Brad Parscale has been hospitalized following a violent attack on his wife and an attempted suicide on the heels of fraud allegations and his ouster from the Trump Campaign.

Parscale was taken into custody by police after they were called to his $2.4 million Florida home yesterday (Sept. 28).

Parscale allegedly battered wife Candice Parscale and threatened her with a gun during an argument.

He allegedly resisted arrest when Fort Lauderdale Police SWAT team members tried to detain him. Officers found a rifle, a shotgun, an AR-15-style assault rifle and five handguns on the premises.

Police placed Parscale under a mental health hold for allegedly threatening suicide and fire a gun in his house. Under Florida’s Baker Act, he can be held for up to 72-hours for evaluation if he is deemed a threat to himself or others.

Police arrived to find the Trump campaign advisor’s wife outside being comforted by a neighbor. She was only dressed in a bikini and a towel and sobbing hysterically, according to media reports.

This is just another example that @realDonaldTrump is the worst manager America has ever seen. Don, you got conned … by your IT guy. pic.twitter.com/x5i7GRqEYb

Officer Steven S. Smith noted the Trump campaign advisor “racked the slide” of his gun, cocking the weapon to fire, according to his report.

“Candace Parscale became so afraid for her safety that she immediately fled…” the report stated.

Michael Cohen Coming Clean: Why It Spells Trouble for Trump

Although Florida is an “open carry” state with lax gun laws, it’s still a crime to brandish a firearm “in a rude, careless, angry, or threatening manner, not in necessary self-defense.”

After fleeing, Parscale’s wife said she heard a “loud bang.” She thought at first he committed suicide, but told officers she could hear him loudly yelling after she fled.

When SWAT officers arrived Parscale had barricaded himself in his house, forcing a standoff.

A family friend was called to the scene and was able to convince Parscale to leave his home.

Once outside, he refused to obey officers’ commands forcing them to tackle the six-foot, eight-inch tall Trump campaign advisor to the ground.

Fortunately, Parscale is white. Officers did not shoot when he resisted arrest or administer a choke hold. He also was not immediately charged.

Earlier this year he was fired from the Trump campaign for allegedly violating campaign finance law by allegedly laundering millions of dollars through his company, Parscale Strategy, according to a complaint filed in July with the Federal Election Commission.

The complaint charged that the Trump campaign hid $170 million in spending to major vendors as well as family members and associates.

The money was allegedly diverted through firms headed by Parscale.

He was booted as campaign manager just before the allegations went public.

Some of the money went to Trump daughter-in-law Lara Trump and Kimberly Guilfoyle, a former Fox News host who is dating the president’s son Donald Trump Jr.

“This scheme flies in the face of transparency requirements mandated by federal law, and it leaves voters and donors in the dark about where the campaign’s funds are actually going,” said Trevor Potter, a former Republican FEC chair and the president of the Campaign Legal Center, which filed the complaint.

Parscale drew widespread media attention earlier this year over his lavish spending. As it turned out, his company had received more than $2 million in the 2020 cycle from the Trump campaign, including nearly $50,000 a month since the start of the year.

Parscale played a key role in Trump’s 2016 election victory, according to The Associated Press.

“Brad was essential in bringing a disciplined technology and data-driven approach to how the 2016 campaign was run,” Jared Kushner, Trump’s adviser and son-in-law, said in the campaign press release.

This past July, CloudCommerce, a company with a close relationship with Donald Trump’s campaign manager Brad Parscale, received $780,680 from the Paycheck Protection Program, according to Mother Jones magazine.

Parscale and his family went from losing one company to bankruptcy in the mid-2000s to multi-million-dollar real estate- and car-shopping sprees, London’s DailyMail.com reported in August a year ago.

Since his association with the Trump campaign, Parscale bought the $2.4 million canal-front mansion in Fort Lauderdale, a $78,000 BMW and a $146,000 Range Rover.

He and his wife also bought another two condos, owned by Parscale Properties, worth a combined $2 million.

Read the full police reports and see the videos below.