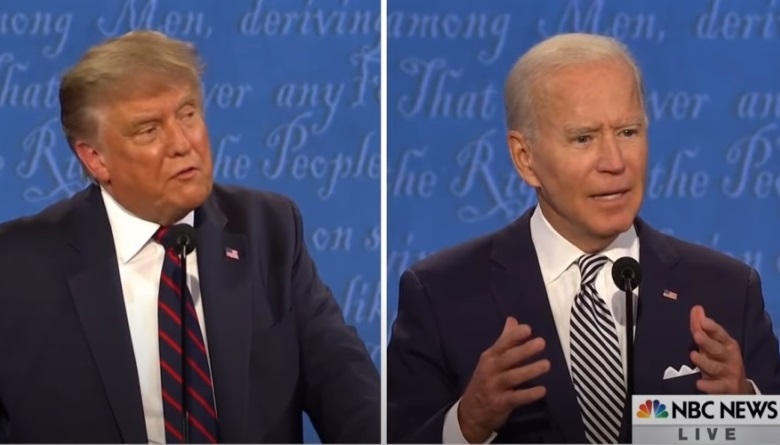 Donald Trump went off the rails in his first presidential debate with Joe Biden. (Photo: YouTube/ScreenCap)

Donald Trump went into the first presidential debate trying to win back suburban moms who have fled his campaign in droves. He came away with a lock on the white-supremacist, neo-Nazi vote.

Trump’s “Stand back and stand by” shout-out to the Proud Boys, an extreme, violent right-wing group, was a low-point in a debate that exceeded all bounds for lack of presidential decorum.

Democratic candidate Joe Biden faced a peculiar dilemma going into the debate and a particular advantage.

He had to avoid being baited by Trump and pulled down to his level in a knock-down, drag-out shouting match.

By the same token, with a substantial lead in the polls, the bar was particularly low. All Biden had to do was look presidential and reassuring to voters.

How could he not?

Biden may have been stiff and uncharismatic at times, but his calm demeanor provided the few instances in the debate where viewers could exhale.

By the end of the night, the question was simple: Who do voters want at the helm of a troubled ship in a tempestuous sea: Captain Queeg or Horatio Hornblower?

In many ways the analogy works, because that’s where America is right now.

If there is any doubt about the chaos that reigns in the Trump Administration it was on full display last night. Trump was a perfect metaphor for it.

He blustered and bullied and failed to mention one issue or policy he plans to pursue if re-elected. He was like a drunk in a bar who quarrels with the bartender.

He not only tried to pick a fight with Biden, attacking his son with spurious claims, he also attacked Fox News moderator Chris Wallace and disparaged the experts in his own administration.

Biden had his shortcomings, too. He could have been more articulate explaining his goals–that is, when he could get a word in edgewise.

Instead, he tried to tie Biden to left-wing extremists and the so-called “antifa,” whom Trump blamed for organizing violent protests in the nation’s cities.

Biden didn’t bite, and it didn’t fly. Instead, his Democratic rival rightly pointed out that antifa is not an organized group.

Trump wouldn’t hear it, but his top two law enforcement officials, again, said exactly the same thing under oath during a Congressional hearing.

To make matters worse, the “law and order” president refused to urge his supporters to avoid civil unrest. Instead, he urged them to bum rush polling places as “poll watchers.”

“I am urging my supporters to go into the polls and watch very carefully,” he said. He came off like he was urging them to intimidate voters.

That led to one of Biden’s better moments of the night. Directly addressing the TV audience, he said Trump’s goal was to suppress the vote; he passionately urged every viewer to cast a ballot.

Trump went off the rails about mail-in ballots, repeating unsubstantiated allegations and conspiracy theories. In the process, he attacked the heart and hallmark of our democracy–free and fair elections.

It’s a rigged election,” Trump shouted. He made the same claim in 2016–until, that is, he won by a scant 77,000 votes across three swing states.

“They’re sending millions of ballots all over the country,” he asserted “This is going to be a fraud like you’ve never seen.”

But there has been no evidence of systematic vote-rigging, including with mail-in ballots, according to experts and his own administration officials.

If undecided suburban voters were a target audience, Trump fell back on a familiar trope to appeal to them–fear.

“They want to destroy our suburbs,” Trump warned in July, referring to Democrats.

“People have worked all their lives to get into a community, and now they’re going to watch it go to hell,” he said.

Last night, he not only went off on the same tangent, he doubled down on it; he claimed Biden wanted to “abolish the suburbs.”

That led to what was perhaps Biden’s best riposte of the night.

“He wouldn’t know a suburb unless he took a wrong turn. I know suburbs,” the former vice president said.

“I was raised in the suburbs. This is not 1950. All these dog whistles on racism don’t work anymore. Suburbs, by and large, are integrated.

“There are as many people, today, driving their kids to soccer practices, black and white and Hispanic kids in the same car, than there has been at any time in the past,” he shot back.

A sea of soccer moms watching at home had to be nodding in unison.

The COVID-19 pandemic has driven the economy into a deep recession and lockdown.

It’s well documented now that Trump dallied for weeks before taking any action, allowing the virus to spread unabated. He’s repeatedly clashed with his own health experts over masks and social distancing, failed to marshal adequate resources and held rallies that turned into super-spreader events.

Trump’s exhortation to governors to reopen the economy clearly came too soon. States that have heeded his call are experiencing a sharp spike in infections and deaths.

“He wants to shut down this country and I want to keep it open,” Trump said.

Trump was clearly exposed on the issue, but Biden failed to clearly articulate his opponents many, many shortfalls, not that he didn’t try.

“You should get out of your bunker and get out of the sand trap and the golf course and go in the Oval Office and (put) together Democrats and Republicans, and fund what needs to be done now to save lives,” he said.

“He panicked or he looked at the stock market. A lot of people died, and a lot more (are) going to die unless he gets a lot smarter a lot quicker.”

Instead of responding, Trump deflected and tried to attack Biden’s academic credentials. Biden laughed it off, but he could have noted that he, at least, took his own SATs.

According to Trump’s sister, he paid someone to take his so he could get into Warton at the University of Pennsylvania.

Trump claimed, once again, that the economy under his administration was the greatest in history, which has been widely debunked. The economy was much stronger in the 1950s and 1960s and during the Clinton administration.

The truth is the Obama/Biden administration pulled the nation out of deep recession and handed Trump the ball on the three yard line… and he still fumbled it.

Economic growth under Trump roughly matched the Obama/Biden administration until it was thrown for a huge loss by the coronavirus.

The Trump administration lost 4.7 million jobs between January 2017 and August of this year.

That was the tenor of the debate for most of the night. Trump fell back on outright lies and misstatements that have marked his term in office, according to fact-checking sites.

“There were times, particularly during the conclusion of the debate, when almost every comment from Trump was inaccurate. Most of his false claims were ones he’s made before and which have been repeatedly fact-checked and found to be false, rather than one-time slips or gaffes,” CNN reported.

See the full debate below: