Fred spent the remainder of his life–and fortune– bailing out his fortunate son.

“I did his homework for him,” Maryanne told her niece in one of several recorded conversations. “I drove him around New York City to try to get him into college.” 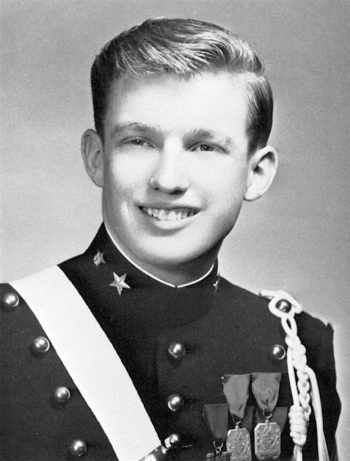 Donald Trump was incorrigible as a youth. It landed him in military school. (Photo: Seth Poppel/Yearbook Library)

He got into Fordham University. At the time, the school was noted for accepting dumb rich kids.

“He went to Fordham for one year [actually two years] and then he got into University of Pennsylvania because he had somebody take the exams,” Maryanne said, flatly.

“No way!” Mary cried. “He had somebody take his entrance exams?”

“SATs or whatever… That’s what I believe,” Barry said, even recalling the name of the person who sat in for him.

Brother Fred Jr. also lent a hand. He was close friends with a Penn admissions official, according to The Washington Post.

That official, James Nolan, told The Post that Fred Jr. asked him to interview his brother. And, he did.

Donald was granted admission to the school.

It was “not very difficult” to get in at the time, Nolan recounted. Half the kids who applied were accepted. Today, the school is much more selective, another fact bolstering the myth.

Over the next few years, Donald, the man, would slowly submerge into the mist of his youth.

In its place the myth would rise like the Berlin Wall, brick-by-brick, with bits and pieces of his early life cherry-picked to fit the narrative.

Donald would become very selective about what he revealed, how he revealed it and who he let in. If there were gaps, he merely filled them in with fabrications.

He would later boast that life had been full of hardship growing up. His parsimonious father would only stake him to a $1 million loan. And he made him pay it back… with interest.

He was a Horatio Alger story writ large. Except the claims were lies. More would follow.