“Hours and long hours in the dead night, I ask ‘Do I live, am I dead?'” the poet wrote.

For Donald Trump, college was a way-station, more than an education. A professor recalled some 50 years later he was his worst student. 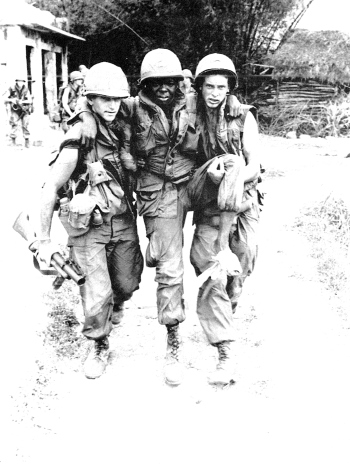 In 1968, the bloodiest year of the Vietnam War, Donald Trump got a draft deferment for ‘bone spurs.’ (Photo: Library of Congress)

No matter; college played a role; it gave him shelter from one of the seminal events of his generation–the Vietnam War.

Thousands of young men were being jerked off the streets by the draft and shipped to the meat-grinder of Southeast Asia. Student deferments kept him out of bounds.

It was the fifth year–after graduating in 1968–that was the problem.

The draft hung over Donald like a dark cloud, threatening to choke off his life, as it did  so many others.

The military could break him, smother him… maybe even get him killed.

He could have joined, of course, taken his chances and embraced the life of a stoic soldier. It would have served him well later in life.

He would have proved his willingness to do his duty for his country.

After all, it had lifted his immigrant grandfather out of poverty and set the course of Donald’s charmed life.

In that sense, he owed America.

Besides, since when did rich kids end up in Vietnam? He probably would have gotten a cushy assignment stateside or in Europe.

Yet, in that pivotal moment, when Donald had the chance to prove himself… the myth took over.

He was 1-A, a prime candidate for the draft. He wanted no part of it. Instead of serving his country, he enlisted the service of a lie.

His father arranged it. He knew a Queens doctor. The doc would write an excuse. It would get him out and keep him out.

“Bone spurs,” the doctor wrote in his medical report.

It was a clear disqualifier, even though Donald had been athletic in military school and never showed any sign of “bone spurs.”

On television that night, Donald had to be watching. The news was filled with reports from the battlefield, graphic footage of young men dying before they had a chance to live.

Killing, carnage, body count… and body bags. Endlessly, day-after-day, in one of the bloodiest years of the war.

But Donald had his ticket out.

Was there a twinge of guilt? Did he think about others who were dying, maybe even in his place?

His sister doubts it. She remembered Donald as a self-centered kid, only out for himself.

“He has no principles. None. None,” she lamented to her niece. “You can’t trust him.”

If, by chance, Donald needed solace, he could find it in his father.

Fred wasn’t about to let his boy go off to war. He needed him to run the business. He groomed him for it, and that’s how it would be.

So it was, Donald had cleared the last hurdle of his youth.