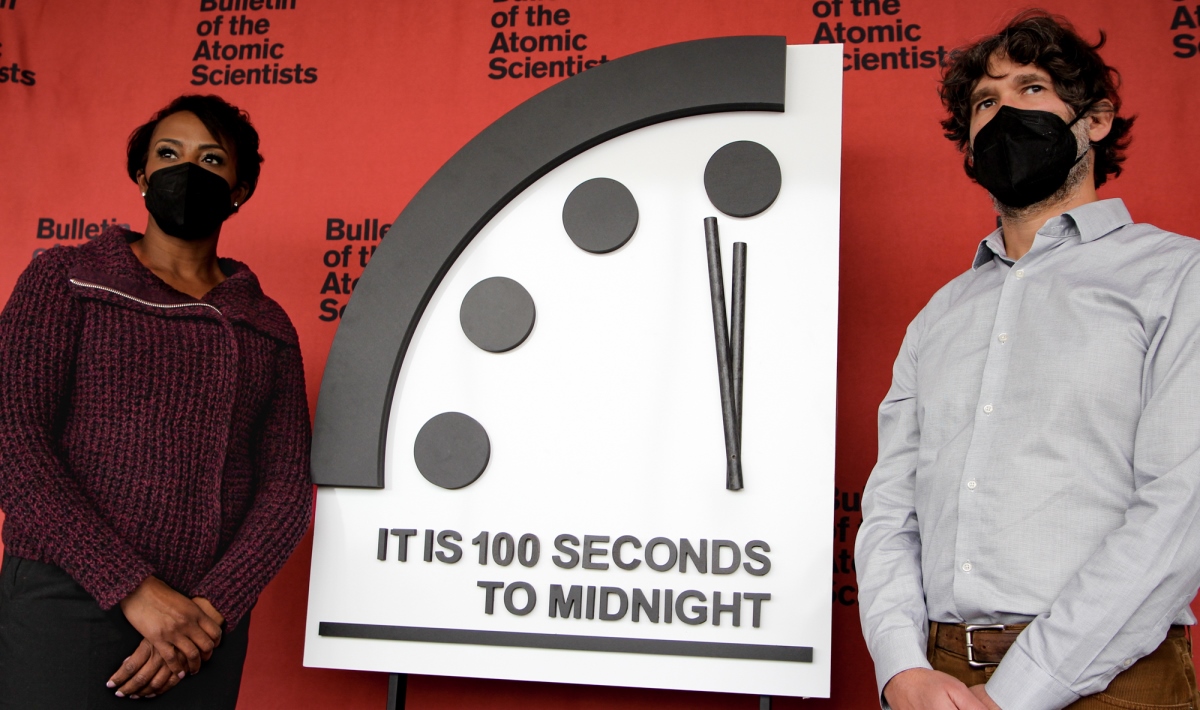 Ask not for whom the Doomsday Clock tolls, it tolls for thee.

It’s “the closest it has ever been to civilization-ending apocalypse because the world remains stuck in an extremely dangerous moment,” according to the group that maintians it.

Marking its 75th anniversary today (Jan.20), the clock is just 100 seconds from midnight for the second year in a row. It was farthest from midnight by 14 minutes in 1995.

Nuclear warfare was the biggest threat during the Cold War, but now climate change, disruptive technologies and COVID-19 have been added to the list.

The “Mixed Threat Environment” is being fueled by disinformation, global security threats, lack of actionable climate policies, disruptive technology, and insufficient worldwide COVID-19 response, according to the “Bulletin of the Atomic Scientists.”

All of these factors were exacerbated by “a corrupted information ecosphere that undermines rational decision making,” according to the organization, which manages the clock.

“No one changes the world alone. We’re not all going to agree, but we have to work together. And together, we will get it done,” said Hank Green, a New York Times best-selling author and science communicator.

To mark the 75th anniversary, the Bulletin has issued a call to action to “#TurnBackTheClock.”

The challenge encourages people to use social media to share stories about the actions that inspire them and strategies of how we can work together to save the world, according to the group.

The Doomsday Clock’s time is set by the Bulletin of the Atomic Scientists’ Science and Security Board.

It’s decision is supported by the Bulletin’s Board of Sponsors, which includes 11 Nobel Laureates.

The Bulletin was launched in 1945 at the dawn of the Atomic Age, following the atom bomb attacks on Japan that ended World War II.

It counts among its members, Albert Einstein, who discovered the theory of relativity, Nazi rocket scientist J. Robert Oppenheimer, Eugene Rabinowitch and University of Chicago scientists who helped develop the first atomic weapons in the Manhattan Project.

The scientists felt that they “could not remain aloof to the consequences of their work” and worked to inform the public and policymakers about man-made threats to human existence, according to a release.

The Bulletin was founded on the belief that because humans created these problems, we have the obligation and opportunity to fix them.

The Doomsday Clock followed in 1947 to add a sense of urgency to the problems threatening to destroy humanity.

Ukraine: If Not Here, Where? If Not Now, When? Russian Must End Aggression

Designed by painter Martyl Langsdorf, the Clock has become an international symbol of the world’s vulnerability to catastrophe, but also hope, of caution, and of our responsibility to one another.

“The Doomsday Clock continues to hover dangerously, reminding us about how much work is needed to be done to ensure a safer and healthier planet. We must continue to push the hands of the Clock away from midnight,” said Rachel Bronson, PhD, president and CEO, Bulletin of the Atomic Scientists.

“One hundred seconds to midnight reflects the Board’s judgment that we are stuck in a perilous moment—one that brings neither stability nor security. Positive developments in 2021 failed to counteract negative, long-term trends,” added Sharon Squassoni, co-chair of the Science and Security Board (SASB).

The 2022 Doomsday Clock statement lists steps that should be taken to address the current threats.

Key Recommendations to Reverse the Hands of the Doomsday Clock

• The Russian and US presidents should identify more ambitious and comprehensive limits on nuclear weapons and delivery systems by the end of 2022. They should both agree to reduce reliance on nuclear weapons by limiting their roles, missions, and platforms, and decrease budgets accordingly.
• The United States and other countries should accelerate their decarbonization, matching policies to commitments. China should set an example by pursuing sustainable development pathways – not fossil fuel-intensive projects – in the One Belt One Road initiative.

• US and other leaders should work through the WHO and other international institutions to reduce biological risks of all kinds through better monitoring of animal-human interactions, improvements in international disease surveillance and reporting, increased production and distribution of medical supplies, and expanded hospital capacity.

• The United States should persuade allies and rivals that no-first-use of nuclear weapons is a step toward security and stability and then declare such a policy in concert with Russia (and China).

• Russia should rejoin the NATO-Russia Council and collaborate on risk-reduction and escalation-avoidance measures.

• North Korea should codify its moratorium on nuclear tests and long-range missile tests and help other countries verify a moratorium on enriched uranium and plutonium production.

• Iran and the United States must jointly return to full compliance with the Joint Comprehensive Plan of Action and initiate new, broader talks on Middle East security, and missile constraints.

• Private and public investors need to redirect funds away from fossil fuel projects to climate-friendly investments.

• At every reasonable opportunity, citizens of all countries must hold their local, regional, and national political officials and business and religious leaders accountable by asking “What are you doing to address climate change?”

“The experience of a deepening crisis has animated protests and other civil society expressions of alarm this year. These actions focus public attention on climate change and raise its political salience, but whether they will transform policies, investments, and behaviors remains among the most important questions facing global society,” said Raymond Pierrehumbert, PhD, Halley Professor of Physics at the University of Oxford

In conjunction with the Doomsday Clock’s 75th anniversary, the Bulletin will also be publishing a new book about the history of the clock and its massive influence on science, politics, pop culture, entertainment, comics and art. More information about The Doomsday Clock at 75 is available by clicking here.