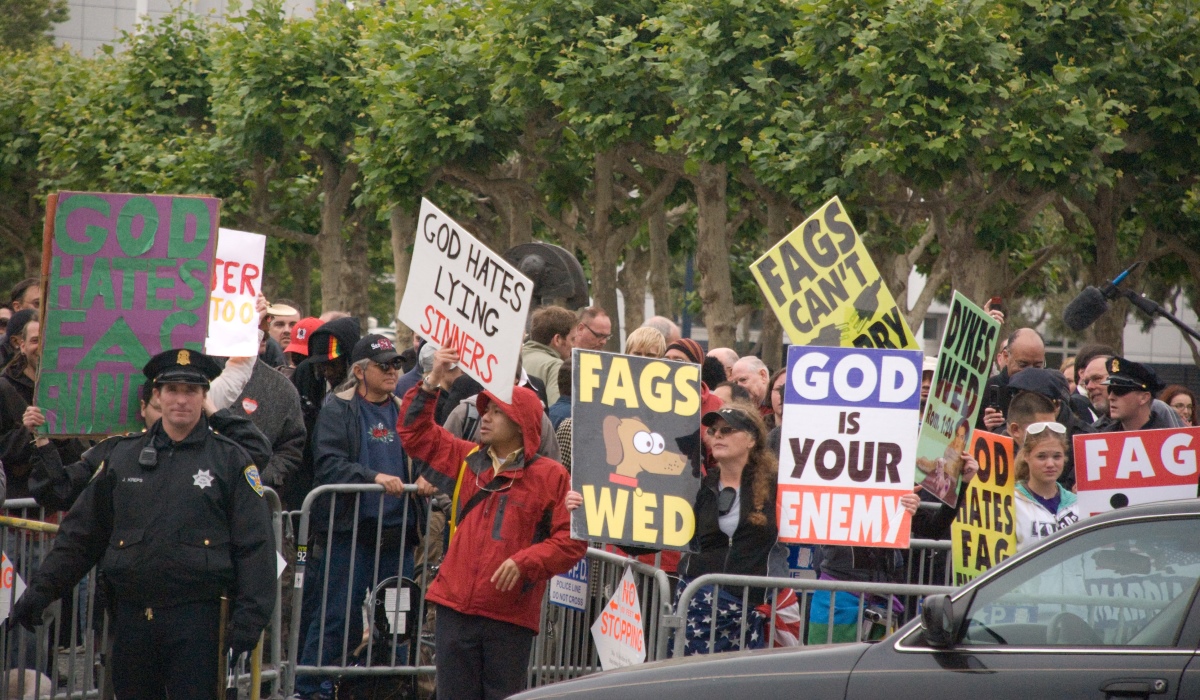 An anti-gay protest. This is the worst year for LGBTQ+ discrimination, an annual study says. (Photo: EwS)

“This past year was one of the toughest in recent memory for our state partners and the LGBTQ+ community,” said Fran Hutchins, Executive Director of the Equality Federation Institute.

The attacks were focused on “particularly vulnerable communities like transgender youth, covered the country with anti-trans sports and medical care bans,” Hutchins said.

One of the more disturbing trends was a resurgence of laws that carve all-new religious exemptions into existing laws that allows people to refuse to serve LGBTQ+ individuals.

Across the country, 44 religious refusal bills were filed including about a dozen so-called Religious Freedom Restoration Act (RFRA) bills.

The Supreme Court ruled the federal law unconstitutional for violating the principle of separation of powers and infringing on the states’ traditional authority to regulate the health and safety of its citizens.

Since then, 23 states have passed their own version of this law, and it’s been used to justify anti-LGBTQ+ laws on religious grounds.

Elliot Page Says Film Roles Limited by Her LGBTQ Sexuality, But She’s Ok With It (video)

The worst states for LGBTQ+ Americans were concentrated in the South and Midwest. On a positive note, 21 states mostly in the Northeast, and Washington, D.C. were recognized for prioritizing innovative measures to advance LGBTQ+ equality.

These states have robust LGBTQ+ non-discrimination laws covering housing, healthcare and public accommodations, according to the groups.

But those gains come in the face of a rising tide of anti-gay legislation.

In all, 147 pieces of legislation attacking gay rights were filed last year, compared with 79 bills and other measures in 2020, also a record year.

A dozen states with Republican legislatures appeared to mount a “coordinated attack” on the transgender community, particularly children, according to the groups.

Tennessee and Arkansas legislatures both passed so-called “bathroom bills” that for the first time ever prevent transgender youth from accessing gender-affirming care.

By the end of the 2021 legislative session, another record 13 bills attacking transgender youth passed into law.

But they made up only a small percentage of harmful bills. A larger number of measures were blocked or stalled in committee.

Those measures ensure that utility companies allow consumers to change their names and pronouns; streamline adoption requirements for step-parents and provide for gender-neutral bathrooms.

Other measures make it easier to update birth and death certificates with correct names and gender markers.

Here are the states rated the worst for LGBQT+ Rights:

Here are the states with the most progressive records:

These states are considered to be “solidifying or “building equality:”

HRC Foundation’s full State Equality Index report, including detailed scorecards for every state, and a preview of the 2022 state legislative session is available online click here.

The photo is licensed under the Creative Commons Attribution 3.0 Unported license.