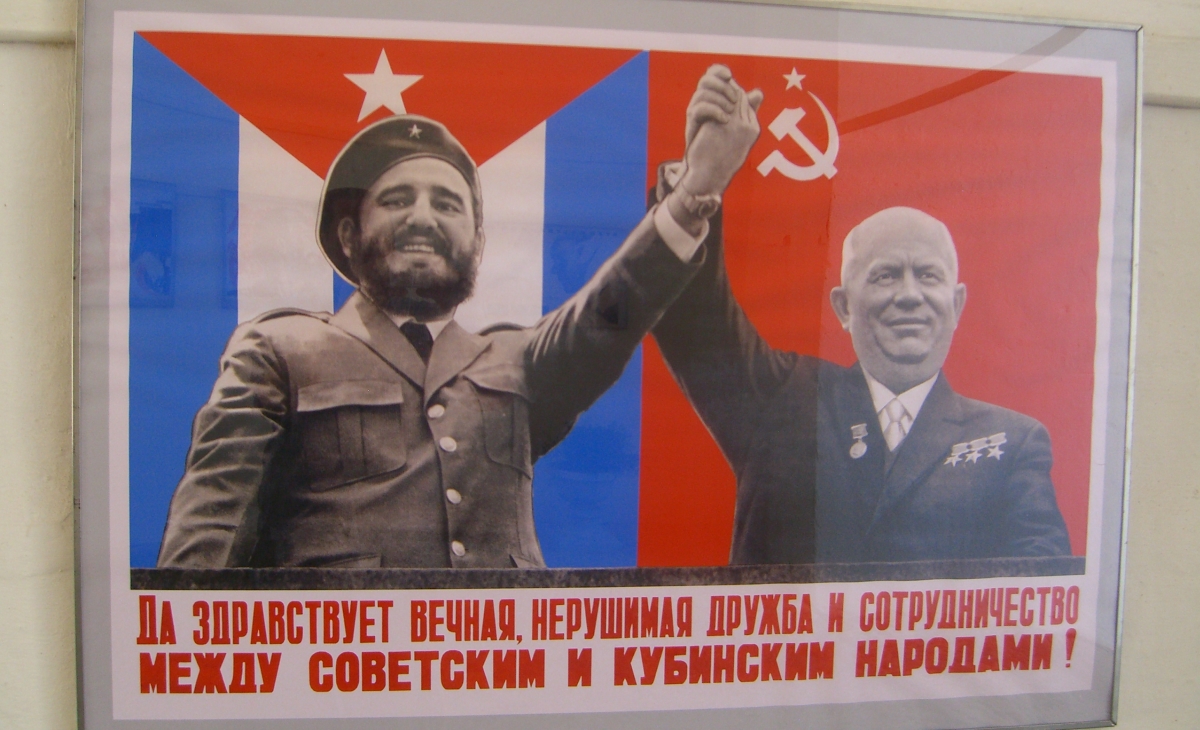 A Cuba-Russia “friendship” poster from the 1960s. Now China is stepping in. (Photo: Keizers )

Donald Trump’s determination to cut Latin American aid during his diastrous one-term presidency has opened the door to China, which is stepping in to fill the void and gain influence in the region.

It was specifically referring to the tepid support for efforts to fight the “health, economic, and political impact of the coronavirus.”

A House Foreign Affairs Committee hearing last July was targeted directly at the administration’s failure to help the region.

More than 60 percent of the region’s roads remain unpaved, 70 percent of sewage going untreated, and unreliable power grids result in enormous losses in electricity, according to economic development studies.

In contast, China held a summit with Latin American countries and announced a comprehensive plan last month to provide aide to the region.

Right-wing media claimed the goal is to “threaten U.S. interests” in the region. But they failed to point out Trump’s role.

“The Chinese don’t say, ‘We want to take over Latin America,’ but they clearly set out a multidimensional engagement strategy, which, if successful, would significantly expand their leverage and produce enormous intelligence concerns for the United States,” Evan Ellis, a former member of the State Department policy planning staff, told The Washington Examiner.

China is working through an organization called the Community of Latin American and Caribbean States, established in 2011 by late Venezuelan President Hugo Chavez. It excludes the United States and Canada.

Jimmy Kimmel Gets Lowdown on Trump Junk: It’s Made in China (watch!)

It’s a counter the Organization of American States (OAS), created by the United States in 1948 to promote “solidarity and co-operation” among North and South American nations.

What’s going unmentioned by congressional Republicans and right-wing media is how the Trump administration opened the door to China in Latin America through catastrophic cuts in aid.

In a significant blow, the Trump administration suspended funding for the Pan American Health Organization (PAHO).

The organization was established a century ago to protect the health of the hemisphere, according to the CSIS.

Trump stiffed the organization for $110 million by refusing to fulfill its obligations, according to congressional lawmakers.

PAHO has scored successes leading campaigns to eliminate smallpox, measles, and polio, despite wars and disasters, as well as containing zika, dengue, and malaria.

In 2019, the Trump administration announced millions of dollars in foreign aid cuts to Central America and imposed tariffs on the region.

The administration created the perfect Catch-22. It demanded governments do more to prevent migration to the United States, but aid cuts spurred more people to flee the country.

Congressional Republicans and Democrats urged the administration to reverse course, fearing the end of American assistance will only exasperate the rampant poverty, deep-rooted political instability and widespread insecurity in El Salvador, Honduras and Guatemala, collectively known as the “Northern Triangle,” CBS News reported.

In 2018, the Trump administration’s budget proposal called for significant cuts to development assistance to some Latin America’s poorest and most unstable countries—Nicaragua, Paraguay, Brazil, Venezuela, Ecuador and Jamaica, according to Global Americans, an advocacy group.

Some of the money would have gone for democracy building programs. Other funds were earmrked for jobs and opportunities that encourage workers to remain in country.

In all, Latin America and Caribbean aid was slated to be cut 36 percent.

“Trump’s proposed budget risks not just diminishing the U.S.’s role in the region without regard for the specific, focused changes in aid strategy, it also falls far wide of the need to address the shifting context and impact of U.S. foreign assistance,” the group said.

In 2020, Trump’s last year in office, his administration stepped up cuts in Latin American aid.

Like the past two years, the Trump administration proposed massive cuts to worldwide foreign aid, slashing the State Department and U.S. Agency for International Development budget by about 23 percent.

The White House sought a 30 percent cut in aid to Latin America through the foreign aid budget, from $1.76 billion to $1.23 billion, according to the White House’s Congressional Budget Justification for foreign assistance in Fiscal Year 2020.

Trump has treated Central America even more harshly. He slashed tens of millions of dollars in aid to El Salvador, Guatemala and Honduras in an effort to stem illegal immigation. But the cuts contributed to the problem.

Congressional critics noted that much of the aid was targeted at reducing illegal immigration and illicit trafficking by addressing dire conditions that cause people to flee.

Fortunately, Congress stepped into the breach.

It rolled back the cuts, on a bipartisan basis, during each of the past two years.

In fact, the White House proposed slightly steeper cuts in 2017 and 2018, and Congress put nearly all the money back, according to WOLA, a research and advocacy organization for human rights in the Americas.

The Biden administration has pledged to re-engage with the world to uphold democracy, human rights, and the rule of law.

“We saw a welcome shift in rhetoric and approach, with a focus on cooperation and partnerships instead of threats and the transactional approach to foreign policy that characterized the Trump years,” according to WOLA.

But some critics question whether Biden is going far enough to reverse Trump’s policies.

“In many areas, the administration has failed to enact the bold measures necessary to live up to Biden’s campaign commitments and to clearly separate this new administration from Trump-era policies and practices,” WOLA stated.

In the meantime, China’s influence in the region emerged when Nicaraguan President Daniel Ortega ordered Nicaragua’s embassy to close in Taiwan. The move was viewed as a bow to China.

Over the past 20 years, China has reached out to region’s mostly left-wing governments which have been at odds with the Unites States over human-rights violations and corrupt elections, according to a Congressional Research Service report.

It’s gaining traction in the region through its “Belt and Road Initiative,” focusing on frastructure investment.

Between 2000 and 2017, Chinese companies invested over $109 billion in Latin America, according to according to Red-ALC China,

Chinese banks have poured in billions of dollars more–one estimate puts it at $150 billion–mostly for energy and infrastructure projects.

Top military officials at U.S. Southern Command have warned for years that Russia, China and other bad actors are rushing to fill the power vacuum left by Washington’s deprioritization of Central and South America in favor of faraway places such as the Middle East, according to Politico.

That said,the Biden administration needs to more faster to reverse Trump’s policies and re-establsh U.S. relation with Central and South America on a more pragmatic basis to counter Chinese influence.

This file is licensed under the Creative Commons Attribution-Share Alike 3.0 Unported license.