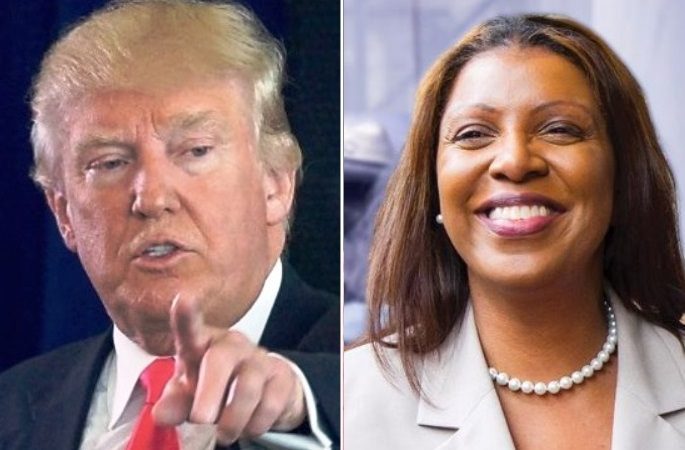 Donald Trump’s lawsuit to “thwart the ongoing, lawful and justified investigation into his and the Trump Organization’s financial dealings” is “baseless” and should be dismissed, New York Attorney General Letitia James asserted today in a new court filing.

James asked the court in a separate filing Jan. 18 to compel Trump, Donald Trump Jr. and Ivanka Trump to testify under oath.

She said her office’s investigation had uncovered “significant evidence” of fraud.

Trump filed his lawsuit against James last December in federal court, after he was subpoenaed to testify along with Donald Trump Jr. and Ivanka Trump.

In a motion to dismiss the federal lawsuit, filed today in the U.S. District Court for the Northern District of New York, James argues that the lawsuit is a “baseless attempt to forum shop” and should be dismissed on both procedural and substantive grounds.

James is relying on a “well-settled legal doctrines that bar federal courts from considering claims that could be more efficiently and appropriately brought in ongoing state court actions.”

Trump and the Trump Organization, she notes, have acknowledged the legitimacy of this investigation and largely complied with it for almost three years, which precludes them from contesting the basis for the investigation or asserting their claims in federal court.

“This lawsuit is nothing but a baseless and meritless collateral attack by Donald Trump to stop our legal and legitimate investigation into his and the Trump Organization’s financial dealings,” said James in a statement.

“In the three years that we have been conducting this investigation, the Trump Organization and its principles have never challenged the legality of the investigation, until now, when Mr. Trump himself was subpoenaed to testify.

“We will not be deterred by frivolous lawsuits and will continue to follow the facts of this case because no one is above the law,” she said.

To date, the Trump Organization has produced more than 900,000 documents, has brought in more than a dozen employees for testimony, and has been subject to multiple orders entered by the presiding state court judge requiring compliance with subpoenas from her office.

“Only now that Mr. Trump himself has been subpoenaed to testify has he suddenly contested the legitimacy of the investigation,” James said.

The People vs. Trump: Ex-President Should Be Tried for Negligent Homicide For 250,000 COVID Deaths

Ivanka “was a key player” in company deals and “was able to ask for an access to financial summaries and projections covering properties or businesses in the Trump Organization portfolio,” according to a memorandum filed with the court.

She was also the lead person in dealings with Deutsche Bank.

Son Eric Trump was questioned in the investigation last October.

Eric Trump invoked the Fifth Amendment, which protects against self-incrimination, “repeatedly” to avoid testifying as to the valuations of multiple Trump Organization properties, according to court filings.

Her office is reportedly looking at several Trump Organization properties, including the Seven Springs estate in Westchester County and the Trump International Hotel & Tower in Chicago.

In a statement explaining the basis for his lawsuit, Trump claimed James is “defrauding” New Yorker for political reasons.

“Three years later she is now faced with the stark reality that she has no case,” the statement said.

“So, in response to Trump suing her and filing multiple ethical complaints, and on the heels of her failed governor’s race, she has no choice but to mislead the public yet again by misrepresenting the facts and ignoring her own inflammatory comments. Her allegations are baseless and will be vigorously defended.”

James’ motion to dismiss also argues suit should be dismissed for failure to state a claim.

The judge presiding over the state court proceeding has compelled the Trump Organization and its employees and agents to comply with numerous OAG subpoenas, confirming that OAG has a sufficient factual and legal basis under New York law to issue the subpoenas, it states.

“Under settled law, Mr. Trump and the Trump Organization are ‘state-court losers,’ and, therefore, cannot ask a federal court to review and reject the state court orders that required compliance with OAG’s subpoenas.”