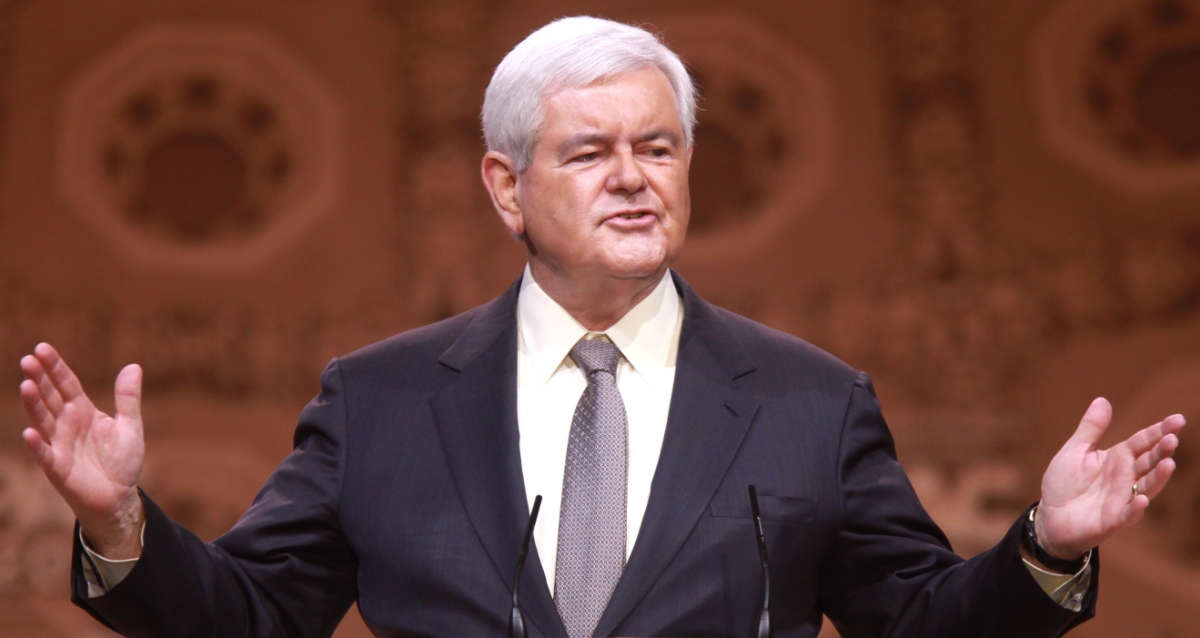 Newt Gingrich, the former GOP House Speaker who resigned in disgrace, has been on a 20-year bender to restore his relevance largely through adhominen attacks. But he’s facing significant blowback for his latest tirade.

The former congressman suggested on Fox News last weekend that members of the bipartisan committee investigating the January 6 insurrection might be jailed if Republicans take back Congress in November.

“Gingrich even likened the January 6 investigators — not the violent seditionists who stormed the Capitol chanting ‘Hang Mike Pence!’ — to a lynch mob (in flagrant disregard for the actual and heinous history of lynching in America),” said Robert Weissman, President of Public Citizen.

The non-profit group bills itself as a “progressive consumer rights advocacy group and think tank,” based in Washington, D.C.

Newt Gingrich Set Up as Moon President on SNL (watch!)

The organization has been around long enough to be intimately familiar with Gingrich’s record and his descent into hyper-partisanship.

He dwelled in the netherworld of politics, largely out of the limelight, until Donald Trump’s foray into presidential politics in 2016.

Since then, he’s lifted his public profile by becoming one of Trump’s most sycophantic lackeys. As such, he’s become a favorite of right-wing news shows.

He appeared more than 20 times on Fox News in December and this January alone and can be counted on to make damning, and often false, claims about President Joe Biden and Democrats in Congress.

He’s most persistent lie is his support for Trump’s claim that the 2020 election was stolen. The assertion was rejected more than 60 times by courts across the country for lack of evidence.

The 78-year-old former Congressman, however, holds a unique niche in history.

He is the architect of the “Contract with America,” a political platform that helped the Republican Party reclaim a majority in the House for the first time in 40 years.

During the 1994 mid-term elections, Republicans scored a net gain of 54 seats in the House, and eight seats in the Senate.

The change, while significant, came after Democrat Bill Clinton won the White House in the 1992 election. He was relected in 1996.

Gingrich became House Speaker and political experts say it marked the beginning of the GOP’s abandonment of democratic norms. But Gingrich wouldn’t survive his own revolution.

He was caught up in the House banking scandal and Congressional Post Office scandal that exploded during his tenure. Gingrich was among House members who had written personal checks on the House bank, including 22 overdrafts to pay personal bills.

In 1997, the House officially reprimanded Gingrich by an overwhelming vote of 395 to 28. He was ordered to reimburse the House for some of the costs of the investigation in the amount of $300,000.

Among the ethics violations was a shady and unpopular book deal.

It was the first time a Speaker was disciplined for an ethics violation in the history of Congress.

Gingrich personally led the campaign to impeach President Clinton for his affair with White House intern Monica Lewinsky. The impeachment failed and was widely cited for costing Republicans 36 seats in the 1998 House elections.

Gingrich was also ensnared in a sex scandal that ultimately doomed his career.

He admitted cheating on his first and second wives, including having an affair while leading the Clinton impeachment proceedings with a woman 23-years his junior.

Gingrich’s first marriage was to his former high school teacher, Jackie Battley, in 1962.

Gingrich married his second wife, Marianne Ginther, months after he divorced Battley in 1981.

Gingrich divorced Ginther in 2000 and soon married Callista Bisek, with whom he began an affair when she was a former congressional aide.

The day after the 1998 congressional disaster, Republican House members rebeled against his leadership, and he agreed to resign from Congress.

“Without Newt Gingrich, we may well have been spared the likes of Mitch McConnell in the Senate and Donald Trump in the White House,” said Weissman.

Gingrich ran for president in 2012, but after a bruising GOP primary, he suspended his campaign and endorsed front-runner Mitt Romney.

She said his campaign positions on the sanctity of marriage and the importance of family values do not square with what she saw during their 18 years of marriage.

President Obama went on to win a second term in office with Biden repeating as his vice president.

In more recent years, Gingrich has worked behind the scenes in Republican politics, vociferiously supporting Trump as a frequent talking head on conservative news shows.

On Fox News, Gingrich has repeatedly attacked Biden, House Speaker Nancy Pelosi and other Democrats, largely based on supposition and inuendo.

But his comments on the Jan. 6 Commission were off the scale.

“Does it matter when a painfully attention-starved egomaniac like Newt Gingrich spouts off like this?” Weissman asked in a statement.

“When a former Speaker of the House aims to intimidate sitting members of Congress and urges the weaponization of criminal law against political adversaries, you bet it matters.

“That we’ve heard this kind of language from Donald Trump doesn’t mean it’s inconsequential for others to echo it. To the contrary, it makes it more dangerous.

As Representative Liz Cheney (a Republican) said in response to Gingrich, “This is what it looks like when the rule of law unravels.”

This image is licensed under the Creative Commons Attribution-Share Alike 3.0 Unported license.