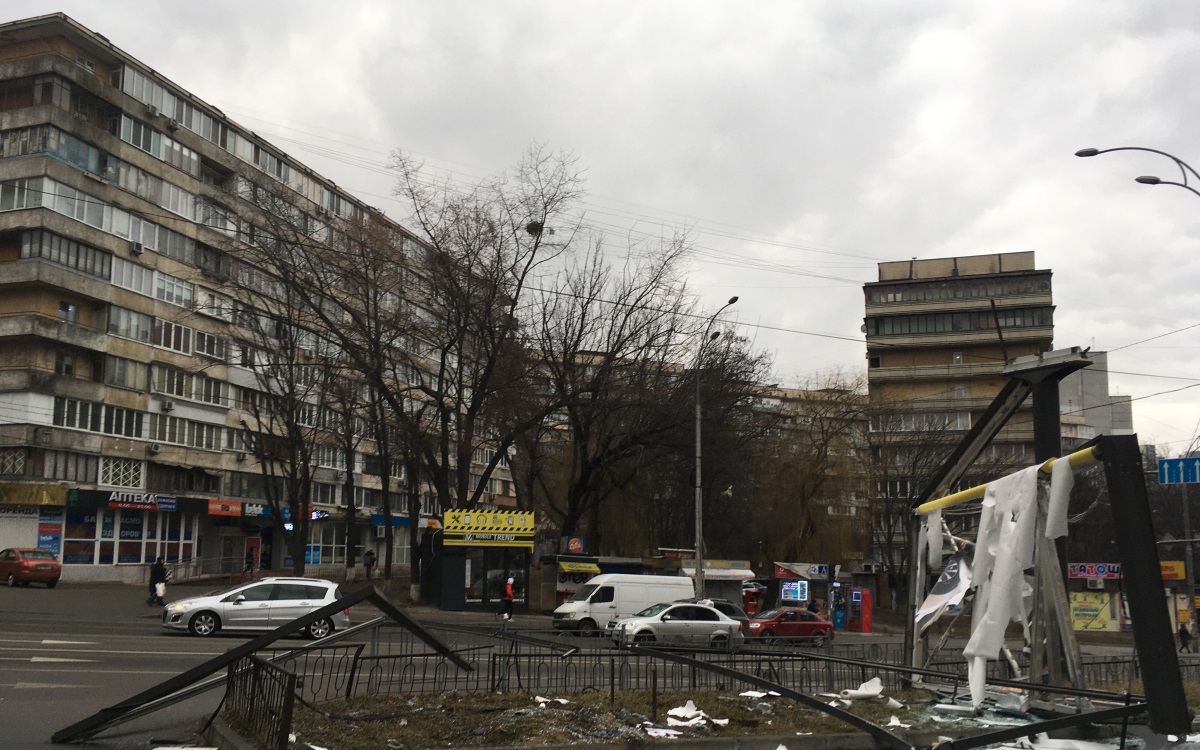 A Kyiv apartment complex is damaged by a Russian rocket attack. Photo: Arrikel)

Russian forces are increasingly turning to artillery and rocket attacks on Ukrainian population centers, leaving as many as 2,000 civilians dead, in what appears to be a growing case of genocide.

Frustrated by stiff Ukrainian resistance, Russia has shifted its focus from mainly military targets to schools, hospitals and residential neighborhoods.

Ukraine’s State Emergency Service said today (Mar. 2) that more than 2,000 Ukrainian civilians have been killed during Russia’s invasion. News organizations are trying to confirm the figure.

The confusion comes from the United Nations High Commission for Human Rights, which is reporting a much lower number.

It said yesterday (Mar. 1) that more than 500 civilian casualties had been reported to the UN, made up of 136 civilians deaths and 400 civilians injured.

The Emergency Service briefly reported that “more than 2,000 Ukrainians died, not counting our defenders,” in a statement on its Facebook page before removing it.

“Children, women and our defense forces are losing their lives every hour,” the statement said.

The reports are backed up to some extent by videos showing widespread damage in civilian areas of various cities, including the capital, Kyiv.

Houses, hospitals and kindergartens have been “destroyed” by Russian forces over the last seven days, the service said.

The UN reported that most of the casualties were caused by “explosive weapons with a wide impact area.”

Russian forces have been attacking with heavy artillery, rocket launchers and air strikes,” the UN office said in a statement.

“These are only the casualties we were able to cross-check, and the real toll is likely to be much higher,” the UN conceded.

Russia has a long history of using carpet bombing and mass attacks on civilians in conflicts in Afghanistan, Syria, Georgia and Chechnya.

A 2019 UN investigation into atrocities committed in Syria for the first time accused Russia of direct involvement in war crimes for indiscriminate bombing of civilian areas. Attacks on medical facilities and other targets drove 700,000 Syrian civilians from their homes.

The UN said Russia engaged in indiscriminate attacks in civilian areas without “a specific military objective,” according to the UK Guardian newspaper.

“The Syrian regime and its Russian allies turned our houses into ruins for the past 11 years, causing many people to be displaced from their homes and villages” one displaced Syrian told Al-Jazeera, the Arab news service.

“What is happening now in Ukraine is the continuation of Russia’s policy, and it won’t stop if the … international community do not unite and put an end to it,” he said.

“Most of their actions in support of the Syrian army was to exact a high civilian death toll in order to break the morale of the people. And eventually they succeeded in basically dismembering the Syrian opposition as a result,” Randa Slim, a senior fellow and director of the conflict resolution program at the Middle East Institute, told NPR.

“I think that’s what they would like to do — they’re going to go with extreme force, partly to break down the morale of the Ukrainian people and try to prevent any kind of organized resistance forming together against them.”

Oleh Sinehubov, the governor of Kharkiv, said that Russian shelling and bombing of various locations in Ukraine’s second biggest city had killed at least 21 people and wounded 112, according to media reports.

The munition is banned under the Geneva Convention because of its destructiveness and its impact on people.

There have also been reports Russia is using anti-personnel cluster bombs, which are designed to inflict maximum casualties. More than 110 countries have banned their use as part of a treaty, but Russia is not a signatory.

It was codified as an independent crime in 1948 and ratified by 149 countries.

The International Court of Justice has ruled that all countries are covered by the statute whether they are signatories or not.

In the context of the Russian invasion, genocide is legally defined as “deliberately inflicting on the group conditions of life calculated to bring about its physical destruction in whole or in part.”

“To constitute genocide, there must be a proven intent on the part of perpetrators to physically destroy a national, ethnical, racial or religious group.”

After weeks of denying plans to invade, Putin justified his actions in a televised address early on Thursday, asserting that the attack was needed to protect civilians in eastern Ukraine.

But the attacks extend far beyond that, covering most of the nation, the largest landmass in Europe.

“As of today, our countries are on different sides of world history,” Zelenskyy wrote on Twitter. “Russia has embarked on a path of evil, but Ukraine is defending itself and won’t give up its freedom.”

If Russia continues its indiscriminant attacks on population centers, the international community needs to do everythhg it can to curb the slaugher.

The rest of the world needs to say, enough is enough.

The above image is licensed under the Creative Commons Attribution-Share Alike 4.0 International license.