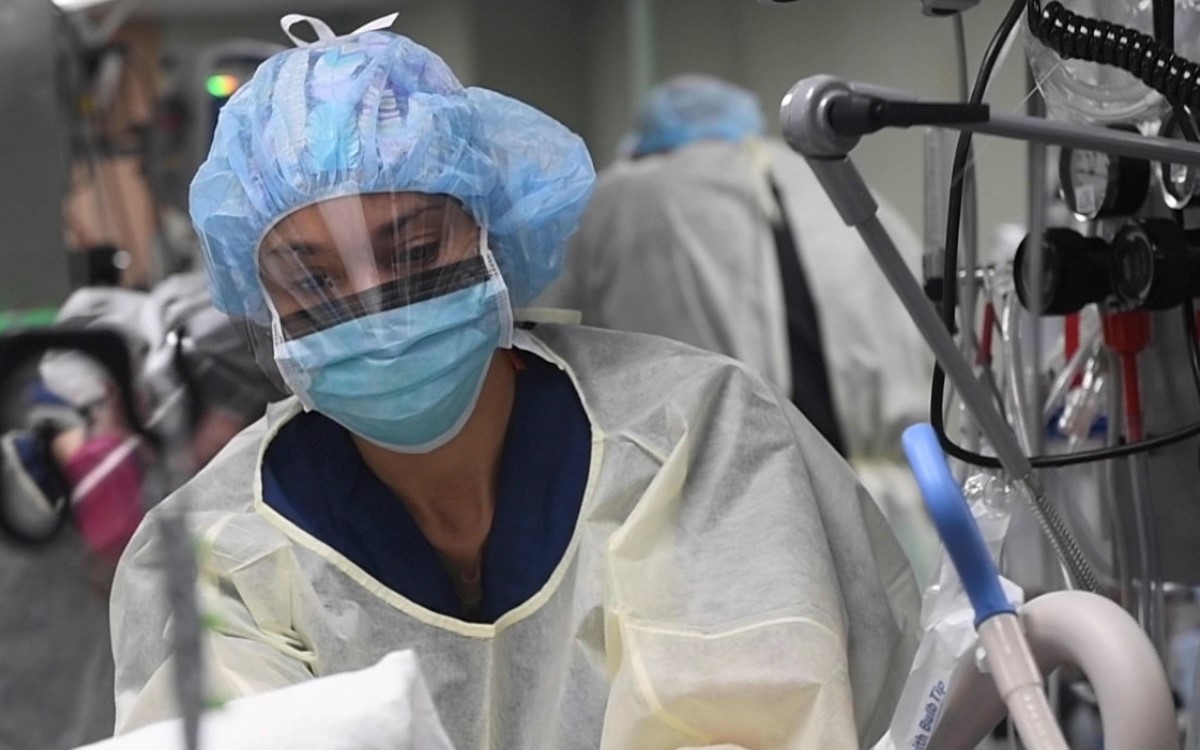 A surgical nurse preps a patient in New York City during the COVID-19 pandemic. (Photo: US Navy)

COVID-19 infections and deaths–on the decline since the Omicron variant arrived–are expected to spike again, just as America drops mask and vaccine mandates and other safeguards.

The third wave of virus infections is being driven by the BA2 variant, which is already spreading rapidly across China and other parts of the world.

It has turned up in Europe and in a limited number of cases in the United States. But the situation is changing rapidly.

Dr. Anthony Fauci said given the growing prevalence of BA2, he expects cases will increase within the next month.

“I would expect that we might see an uptick in cases here in the United States,” requiring the use of masks indoors.

“Much of the country right now is in that zone where masking indoors is not required,” Fauci told ABC affiliate KGTV Wednesday.

The United States has eased masking guidance for 70 percent of the country, including schools, according to the federal Centers for Disease Control (CDC).

Dr. Eric Feigl-Ding, an epidemiologist and health economist and Chief of the COVID Risk Task Force at the New England Complex Systems Institute, issued an alarming warning in new article.

“I have a sinking feeling again… a bad feeling I had two years ago, when Wuhan was in a state of panic trying to control the initial outbreak, that the events in China could ripple across the world,” he wrote in the article, published by Mediva, a maker of medical diagnostics and testing produts.

Feigl-Ding’s concern is being driven by developments in China, where the BA2 variant is surging and causing extreme lockdowns in cities and provinces affecting more than 90 million people.

Anti-Vaxxers Dying Horrid Deaths in a Vortex of Their Own COVID-19 Lies, Disbelief

The residents are under strict, stay-at-home lockdowns or partial lockdowns.

China, he notes, is trying to avoid the fate of Hong Kong were deaths are surging so high they are approaching levels in New York City at the outset of the pandemic in the Spring of 2020.

Hong Kong’s death rate has still not peaked and the virus may continue to spread into May or even June. The city’s mortality rate is now highest in the world.

If COVID-19 Is a War, Here Are 12 War Criminals Who Cost Thousands of Lives

An epic surge is also sweeping South Korea, surpassing all-time pandemic highs. BA2 makes up 31% of all variants detected in the country.

Meanwhile, Western European leaders have naively believed they are immune from BA2 after their recent Omicron wave,” he writes.

“They are wrong— there is some sobering news for those leaders who claim ‘COVID is over’—they are delusional as cases are soaring across Europe again, this time dominated mostly by BA2 plus with added relaxation of mitigations. Let’s always learn from what’s happening elsewhere, because #CovidIsNotOver.”

“If this hits Shanghai and other major Chinese industrial cities… supply chains worldwide will suffer,” he writes. China’s stock market has seen some of the largest drops in recent memory this month.

“While temporary suspensions and brief lockdowns have occurred before, the potential scale of this BA2 wave is massive, and like HK experts warn, could be very long and extensive,” Feigl-Ding writes.

The BA2 virus, while a subvariant of Omicron, is very different from BA1, the original Omicron. For one, it is even more easily transmitted.

“Notably, in England, cases are surging across every age group, and both cases and hospitalizations are surging. BA2 is now over 50% dominant,” he warns.

“Moreover, BA2 is showing 25-percent to 30-percent higher secondary attack rates both within household and non-household settings, according to UK data. That bodes poorly as it shows faster transmission of BA2.”

“Something is very different now,” writes the U.S. doctor, who is also an advisor and COVID-19 expert committee member for the World Health Organization.

Shenzhen health official Lin Hancheng warned that this BA2 strain is “highly contagious, spreads quickly and has a high degree of concealment.”

That means it can lead to widespread community transmission if control measures are not strengthened soon.

This “high concealment” statement has never been used during the two-year pandemic before and likely suggests something about BA2 that Chinese officials have realized.

“We should take it seriously,” he warns.

“I’m now confident that BA2 definitely deserves its own distinct Greek letter, separate or Omicron family. BA1 and BA2 are more different than Delta is from original Wuhan 1.0 strain.

“And the infectiousness and attack rates don’t lie —BA2 is worse by leaps and bounds.”

The United States, however, is moving away from COVID safeguards just as the virus is reaching American shores.

Nearly 23 percent of new U.S. cases sequenced were attributed to BA2, according to Covariants.org, which tracks variants worldwide.

Cases of BA2 have doubled (and sometimes tripled) every two weeks in the United States, according to the group.

Fauci said he is encouraged that BA2 does not appear to cause more severe disease, but warned if the United States experiences another COVID wave, Americans must be willing to readopt mitigation measures.

“We have to be careful that if we do see a surge as a result of that, that we’re flexible enough to reinstitute the kinds of interventions that could be necessary to stop an additional surge,” he said. “I hope that doesn’t happen. But we’ll just have to wait and see.”