David FaginMay 13, 2022POLITICSCRIME
A Donald Trump rally boiled over into an insurrection at the U.S. Capitol. (Photo:
Home
POLITICS 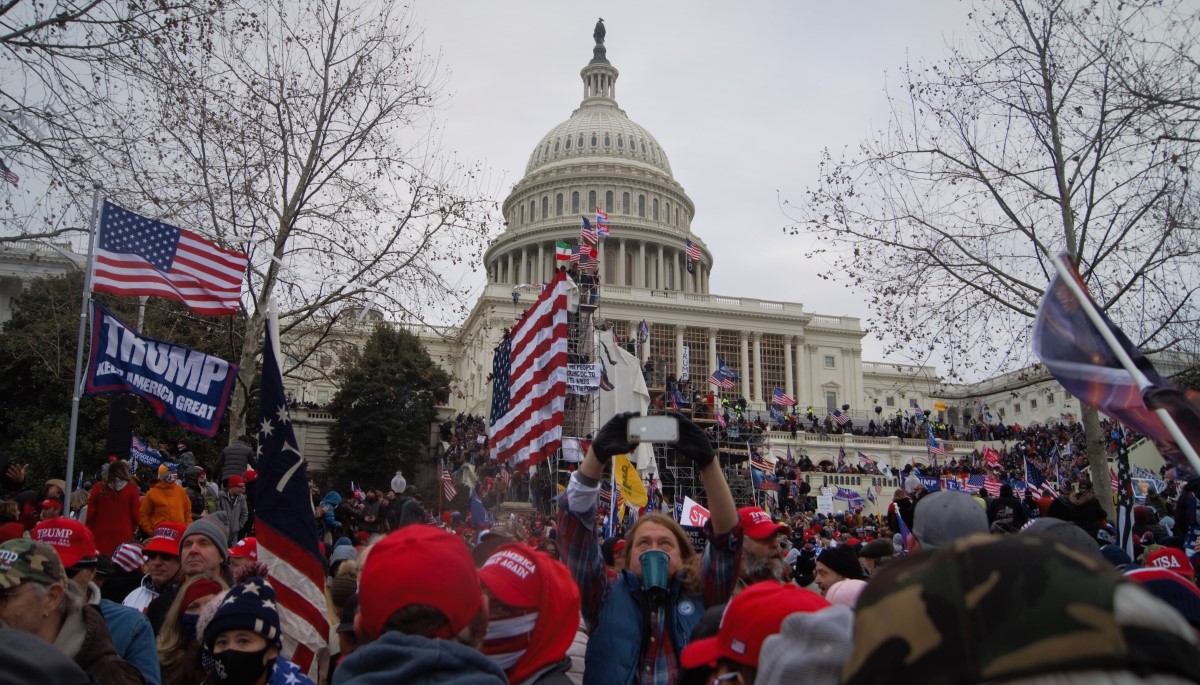 A Donald Trump rally boiled over into the Jan. 6 insurrection at the U.S. Capitol. (Photo: Tyler Merbler )

Democrats are facing a crisis of courage summed up in one sentence by Rep. Sheila Jackson Lee during a television appearance.

I sat down to watch “All In with Chris Hayes,” co-hosted by Ayman Mohyeldin.

The Texas Democrat was one of the guests.

“I haven’t given up on Joe Manchin, and neither has the president.”

I almost jumped out a window.

I will never forget where I was when Lee uttered those inexplicably obtuse words – I was in the kitchen eating spaghetti.

Jon Stewart Scolds Democrats for Lusting After Root of All Evil (watch!)

To me, this was the moment I gave up on the Democrats, as a whole, and realized we just don’t have the warriors necessary to take on the GOP Death Star–and win.

At least not enough of them.

After he killed voting rights, killed civil rights, preserved the filibuster and killed a woman’s right to control her own body, Manchin is still getting a free pass from Democrats.

You’d have to be an idiot not to realize there’s about as much chance of Democrats cracking the whip as there is Sen. Susan Collins calling a press conference and admitting she’s a national disgrace.

Jackson’s comment was so tone-deaf and so disheartening, she may as well have said “I haven’t given up on Trump.”

And what does it say of Hayes guest host, Ayman Mohyeldin?

He was completely silent when she gave her reply. No rebuttal. No, “Excuse me, Congresswoman?”

Perhaps he agreed with her? Or, perhaps he was told by the brass to “be nice” and not rock the boat?

Either way, his silence confirms the liberal media is inexcusably forgiving of their guests, because they want them to come back.

And, because they don’t want to scare off others from coming on.

In just these past few weeks, a Supreme Court Justice, Clarence Thomas, was implicated for attempting to cover up his wife’s role in the Jan. 6 insurrection. Yet, only a few Dems had the guts to call on him to resign.

House Speaker Nancy Pelosi remains quiet as a mouse. It’s obvious too many things are more important to the Dems, at least most of them, than accountability.

You could also say some things are more important than our democracy.

Words on Paper Are All That Protect Our Democracy; It’s Time to Take a Stand

Congressman Adam Schiff proved the point on “Rachel Maddow” a few weeks back.

It looked like our last hope for justice was collapsing when he said the Jan. 6 Commission had failed to call a single Republican lawmaker who possibly played a role in the insurrection.

“This is one area even I won’t tread.” Schiff said, calling it tantamount to “starting a war,” he added.

But guess what? We are already in a war… for the future of our democracy.

Then, in an abrupt turnaround the commission finally seemed to get the message. Chairman Bennie G. Thompson (D-MS) announced new subpoenas.

Rupert Murdoch, the Most Vile Man in America, Lays Waste to Soul of Democracy

All five previously had been “invited” but refused to appear. Imagine that, Congressmen defying Congress–so much for the rule of law.

It’s patently obvious that these lawmakers may have much to hide. They may have been active participants in the coup attempt.

But without their testimony, we may never know the true extent of the coup’s plotting or the plotters.

Trump Attack on Democracy is Nothing Less than Treason; It’s Time to Say It

Meanwhile, the Justice Department has been a riddle wrapped in an enigma.

Despite reports of several ongoing investigations, Attorney General Merrick Garland is playing his cards close to his vest… so close some fear he’s pocketed them.

Blind Ambition: Hawley, Cruz Threw in With Trump Mob; Now Throw Them Out

As things now stand, the very notion that “no one is above the law” in the United States has become a mockery, aiding and abetting our enemies overseas.

Meanwhile, Republican lawmakers and Fox News host Tucker Carlson among others are getting star billing on Russia’s television propaganda networks.

If only Russians voted, but in many ways they are.

They continue large scale efforts to meddle in elections and sow division to undermine our democracy through their Fox News surrogates.

No matter the stakes, the Dems simply refuse to take the gloves off.

How much more proof do we need to know Joe Manchin is a Republican? If he had any honor at all, he’d change his name to Manchurian.

When a person shows you who they are, believe them.

Unfortunately, former Repubican strategist and leading Donald Trump critic, Steve Schmidt seems to have hit the nail on the head.

Earlier this week, the former John McCain campaign manager declared that President Biden has turned into a ‘senile cartoon.’

In his opinion, Biden’s failure to fight fire-with-fire and directly confront/rebuff the insanity coming from the party of Trump, has turned him into a paper tiger.

A friendly, lethargic grandpa, if you will. And he’s not alone.

Polls show Biden is currently at the lowest numbers of his presidency – even in danger of losing the backing of his own party, come 2024.

Because, while Biden’s out there patting himself on the back about unions, the economy, the first woman this and that, the fascists across the aisle are hard at work.

Republicans are corrupting our Supreme Court, rewriting state voting laws and gerrymandering every county they can, so come November and beyond, what they did in 2020 will now be “legal.”

In the classic Alan Parker film, “Mississippi Burning,” Gene Hackman and Willem Dafoe play FBI agents with completely opposite ways of getting information.

After a particularly frustrating time interrogating a suspect, Dafoe, the by-the-book G-man, says to his bare knuckles partner, “Don’t drag me into your gutter!”

To which, Hackman replies: “These people crawled out of a sewer! Maybe the gutter’s where we should be!”

Here’s hoping the Dems find a bit of Hackman in them before it’s too late.

Too much is at stake, including democracy itself.

The image abobe is licensed under the Creative Commons Attribution 2.0 Generic license.