Trump to Biden: Let’s Make a Deal for Blanket Pardon 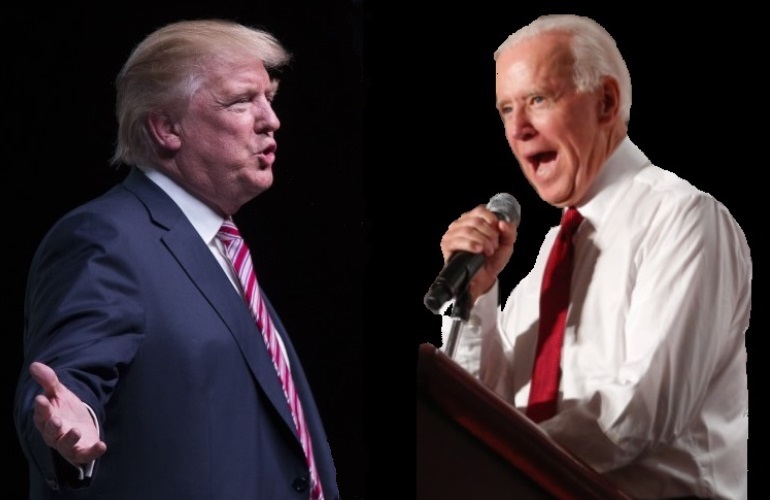 Donald Trump may be angling for a pardon from Joe Biden. (Photo: NYI Collage)

While it’s still problematic whether soon-to-be ex-President Donald Trump is facing indictment, his tempestuous refusal to concede the 2020 election amid a blizzard of lawsuits has just one goal–he wants to deal.

Trump, his family members and the Trump Organization are all certain to face criminal charges for various frauds related to money laundering, real estate wheeling and dealing and campaign finance violations.

Trump’s only avenue to avoid jail, or hefty civil fines is to negotiate his departure from the White House.

Already reports have been circulating that Trump is willing to concede the election and cooperate with the transition, if “certain conditions are met.”

He clearly wants a blanket pardon from President-elect Joe Biden, at least for himself and his family and perhaps key administration officials as well.

Otherwise, the president will have to throw his family and his real estate empire under the bus.

There is ample precedent for Trump to cut a deal with the incoming Biden administration.

Agnew, who was facing bribery charges related to his time as Maryland governor, agreed to resign from office to avoid prosecution.

Trump could follow a similar course to keep family members from being prosecuted, he told MSNBC’s “Morning Joe.”

“It’s only going to get worse,” London said on the show. “We don’t know a quarter of what’s in the pocket of the prosecutor.”

It’s unknown at the moment, where those investigations stand, but it’s safe to say Trump is still under the gun.

His testimony before Congress prompted New York Attorney General Letitia James to launch her own investigation into alleged tax fraud.

In addition, Manhattan District Attorney Cyrus Vance has been conducting a criminal investigation into Trump and his company’s business dealings.

It’s unknown what other information Cohen provided to investigators, but he’s clearly hinted that other matters are being probed, because he said he’s under a federal gag order.

Longtime Trump Organization CFO Allen Weisselberg was granted immunity from prosecution in return for his testimony in the Cohen probe.

It remains to be seen whether Trump’s former campaign manager, Paul Manafort, has also fingered Trump.

Trump could also be prosecuted for any of the 10 instances of obstruction of justice uncovered by the Mueller investigation.

As president, Trump has immunity from indictment under a long-standing Department of Justice (DOJ) policy.

But once Trump leaves office, he is fair game. His cloak of immunity will be gone.

“The short answer is that once he leaves the office, his cloak of immunity, actual or implied by (Justice Department guidelines), will disappear,” David Weinstein, a former Florida federal prosecutor, told USA Today.

He could also be compelled to testify under oath in a number of civil lawsuits, including two defamation lawsuits filed by women who allege Trump sexually assaulted them. One woman is seeking his DNA.

Trump has a lot to gain if he’s able to negotiate a pardon and a lot to lose if he doesn’t. The harm to his business is incalculable from long, drawn-out litigation, plus possible convictions and fines.

The idea that Trump is angling to negotiate a deal is suggested by his actions following his substantial defeat in the November election.

His refusal to concede the election followed by flurry of lawsuits is standard operating procedure. He’s followed it throughout his business career to get out of financial trouble.

Trump has a long litigation history. Trump or one of his companies have been plaintiffs in 1,900 cases, defendants in 1,450 and a third party defendants in 150 bankruptcy cases.

Although Trump has said that he “never” settles legal claims, he and his businesses have settled with plaintiffs in at least 100 cases, according to legal references.

In situations where Trump has been sued by the government for alleged wrongdoing, his response has almost always been to countersue to force a favorable settlement.

It’s a pattern that began in the 1970s when the federal government alleged that Trump’s rental corporation engaged in a pattern of discrimination against African-Americans.

While most real estate companies would seek a quick settlement, Trump’s lawyer, the nefarious Roy Cohn, filed a counter-suit against the government for $100 million, asserting that the charges were irresponsible and baseless.

A federal judge threw out the countersuit, calling it a waste of “time and paper.” Yet it was enough leverage to allow Trump to settle the charges out of court without admitting guilt.

That’s very likely the outcome he’s seeking with his post-election litigation, most of which is frivolous. As soon as one suit is thrown out of court, his campaign files others.

The question is will Biden agree to grant him a blanket pardon?

It’s distinctly possible, and there is precedent for it.

President Richard Nixon resigned in 1974 in the face of certain impeachment for Watergate crimes. But it was only after he negotiated a pardon with his predecessor Gerald Ford.

At the time, Ford said he pardoned Nixon to spare the nation from a prolonged legal ordeal and to put the Watergate scandal to rest.

Biden, who pledged during his campaign to heal the political rift caused by Trump’s tumultuous reign, could cite the same reasons to pardon Trump.

But it wouldn’t happen without political repercussions. Ford, as it turned out, was a one-term president. He lost the election to Democrat Jimmy Carter in 1976.

Trump’s biggest card at the moment is to refuse to conceded and threaten to draw out Biden’s transition amid continuing political rancor.

It’s not beyond the pale to believe Barr, Secretary or State Mike Pompeo and other Republicans are playing along to increase the pressure to do a deal.

But Trump only has so long to play out this scenario.

Biden will take office Jan. 21 no matter whether Trump concedes or not. But he could tie up the administration legally for months.

In the interest of “healing” the nation and closing the door on the Trump era, Biden just might be willing to do it.

Trump undoubtedly will refuse to admit any wrongdoing, and may agree to forego politics for a period of time.

But there is always 2024. Trump has vowed to run again. He’d rather not do it as a felon.