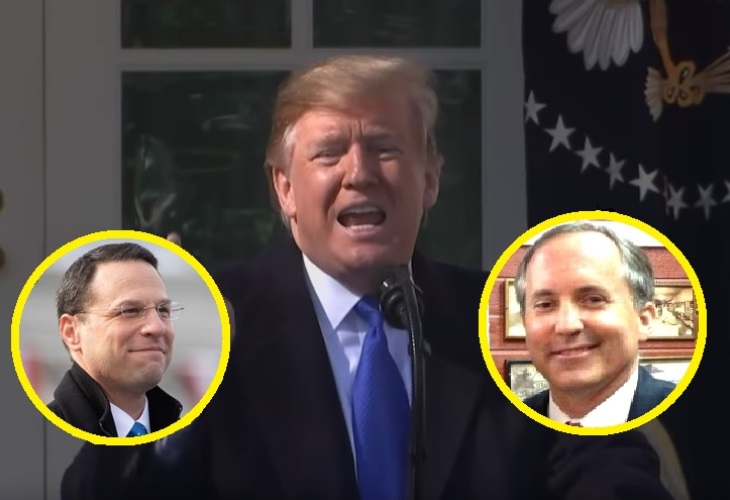 Donald Trump calls it “the big one,” but Pennsylvania Attorney General Josh Shapiro today (Dec. 10) shredded a lawsuit brought by the state of Texas seeking to overturn election results in four states.

Pennsylvania has been ground zero of a flood of frivolous lawsuits aimed at disenfranchising large swaths of voters and undermining the legitimacy of the election, the court filing states.

So far, more than 50 lawsuits filed by the president’s lawyers have been rejected by various courts.

The latest, and likely the last gambit before electors gather to vote Dec. 14, was filed by the state of Texas on Tuesday (Dec. 8).

State attorneys general from 17 states where Trump won have joined the case in an amicus brief.

Legal analysts have been saying for the past week the case is frivolous, and Shapiro drove that point home in his opposition to the suit.

Texas not only lacks standing to bring such claims, but its lawsuit is “an affront to principles of constitutional democracy,” and a “seditious abuse” of the court system, the filing asserts.

“The cascading series of compounding defects in Texas’s filings is only underscored by the surreal alternate reality that those filings attempt to construct.”

Texas Attorney General Ken Paxton argued in a 154-page lawsuit that 64 electors from Georgia, Michigan, Pennsylvania and Wisconsin should be disqualified from casting their votes.

The Republican official claimed those states unconstitutionally changed their voting procedures during the coronavirus pandemic to allow for increased mail-in ballots.

He’s also seeking a delay in the deadline for the Electoral College to make Biden’s victory official.

But Shapiro sharply countered the lawsuit.

“What Texas is doing in this proceeding is to ask this Court to reconsider a mass of baseless claims about problems with the election that have already been considered, and rejected, by this Court and other courts,” his filing states.

“Texas does not seek to have the Court interpret the Constitution, so much as disregard it”

Shapiro also charged that the suit is based on a “surreal alternate reality,” based on “an absurd statistical analysis.”

The analysis, prepared by Charles J. Cicchetti, an economist and managing director at Berkeley Research Group, has gained wide currency on right-wing networks like Fox News and on social media.

Of significance, Cicchetti claims the statistical probability of Biden winning the election is “one in a quadrillion.”

Cicchetti based his assessment on the “extremely low probability” that the votes counted before 3 a.m. in Pennsylvania and those counted afterwards were “randomly drawn from the same population.”

It was widely known weeks in advance of the election that Democrats were voting by mail at two to three times the rate of Republicans.

Cicchetti also based his eye-opening claim an an examination of vote patterns for Biden and Democrat Hillary Clinton in the 2020 and 2016 elections.

“It should not be necessary to point out that the 2016 and 2020 elections were, in fact, separate events, and any analysis based on the assumption that voters in a particular state would behave the same way in two successive presidential elections is worthless,” Shapiro countered.

Paxton argues that Texas has the standing to bring such a lawsuit because its electors will have their voting power diluted by the practices in the battleground states.

Shapiro responded strongly to that, too.

“Far from trying to vindicate its own sovereign or quasi-sovereign interests, Texas is ultimately seeking redress for the political preferences of those of its citizens who voted for President Trump,” the court filing states.

“Texas repeats the same false allegations of election fraud that have already been repeatedly rejected by other courts.

“And its request for relief—to disenfranchise tens of millions of voters who reasonably relied upon the law—is uniquely unserious.”

“Let us be clear. Texas invites this Court to overthrow the votes of the American people and choose the next President of the United States.

“That Faustian invitation must be firmly rejected.”